Neither is “new jobs ‘created’,” for that matter.  Companies only hire new workers for the same reason they invest in new machinery: there is existing demand to be filled.  Even then, you only hire new workers after you’ve gotten all the overtime you can out of your existing workers.  If anything, “new jobs ‘created’” is a lagging economic indicator.  Plus, in an economy in which human labor is being replaced by machinery at an increasing rate, “new jobs” doesn’t necessarily mean what “they” think it means.  What does mean something?  Try this:

• Amazon Smile program.  Here are the instructions for using the Amazon Smile program.  It’s pretty easy, but you have to follow the directions exactly, or CESJ won’t get the 0.5% of your net purchase(s) as your donation (it adds up).  First, go to https://smile.amazon.com/.  Next, sign in to your account.  (If you don’t have an account with Amazon, you can create one by clicking on the tiny little link below the “Sign in using our secure server” button.)  Once you have signed into your account, you need to select CESJ as your charity — and you have to be careful to do it exactly this way: in the space provided for “Or select your own charitable organization” type “Center for Economic and Social Justice Arlington.”  If you type anything else, you will either get no results or more than you want to sift through.  Once you’ve typed (or copied and pasted) “Center for Economic and Social Justice Arlington” into the space provided, hit “Select” — and you will be taken to the Amazon shopping site, all ready to go.  That’s it.  Oh, and be sure to share this information with your friends and neighbors. 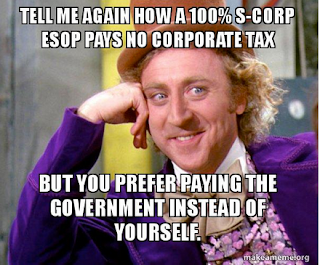 • The CESJ core group had a very productive meeting this morning with the representative of a state agency that could be very important.  The agency is starting to look at the potential of JBM S-Corp ESOPs as a way of enhancing the bottom line for small and minority business start-ups.  A company that is organized as an S-Corp and is 100% owned by the workers through an ESOP trust pays no state or federal corporate income tax under current U.S. law.  That means that cash flow could be enhanced by as much as 50%, depending on the level of taxation — and it gets pretty steep in some states.  CESJ, of course, is a non-profit and does not do any professional consulting, but Equity Expansion International, Inc., a for-profit company, has agreed to use CESJ’s principles and the Just Third Way when doing deals.

• We received our copy of Dr. Anthony Esolen’s book, Reclaiming Catholic Social Teaching (2014) in the mail yesterday.  We’ve only had a chance to get about twenty or so pages in to it, but so far he has stressed almost to redundancy (which, considering the state of things today, is a really good idea in order to break through the fog of ignorance and bad ideas) Aristotle’s and Aquinas’s dictum that a small error in the beginning leads to great errors in the end.  He doesn’t put it that way, of course — this is a much easier book to read than anything Aristotle or Aquinas wrote.  He just makes the same case as Mortimer Adler that you can’t fix a system when the underlying assumptions are bad, e.g., an economic system based on the slavery of past savings can’t be fixed simply because past savings are not the sole source of investment financing.  It’s a bad assumption on which to base your economic, monetary, and fiscal policy for the simple fact that it isn’t true, as Dr. Harold G. Moulton explained in 1935 in The Formation of Capital.

• We sent another batch of outreach material this week to some potential door openers and movers and shakers.  This is useful even if you only get a response one out of fifty or a hundred times.  That hundredth individual may be just the one who has been looking for us and the Just Third Way.  In any event, it’s ahead of the odds.  Kipling said it was only one in a thousand (to stretch his meaning a little).

• Our blog series on common sense has been eliciting quite a bit of positive commentary.  There have, in fact, been only two negative comments, one of which being that it is “too religious.”  We assume the critic thought that because two of the three thinkers we’re profiling were Catholic priests, thereby making it automatically “religious.”  True, there is a lot of mention about God, religion, ’n stuff, but it’s kind of hard to discuss common sense within the Aristotelian-Thomist philosophical framework without mentioning these things.  Read carefully, however, and you’ll see what most people are seeing: the universal principles of common sense applied to a discussion of where things went wrong with Church, State, and Family, mostly through the effect that bad ideas about God, religion, ’n stuff had in Academia, from whence it spread to the rest of society.  If you’re not allowed to talk about these things, it’s awfully hard to discuss what went wrong because people refused to talk about them.

• Interestingly, some individuals and groups whose positions are refuted in the blog series seem to be lying low and hoping that nobody will read it.  If so, they are out of luck.  Our readership has tripled since the series started.  We must be saying something right to somebody.

• As of this morning, we have had visitors from 57 different countries and 52 states and provinces in the United States and Canada to this blog over the past two months. Most visitors are from the United States, the United Kingdom, Russia, Canada, and India. The most popular postings this past week in descending order were “Thomas Hobbes on Private Property,” “Halloween Horror Special XIII: Mean Green Mother from Outer Space,” “Aristotle on Private Property,”  “The American Chesterton, I: The Triumph of the Will,” and “Book Review: A Field Guide for the Hero’s Journey.”