The financial world is in an absolute panic, the economic mavens are freaking out, politicians are starting to wonder if they should start looking for honest work . . . until they remember that their financial and economic policies have ensured that there won’t be any jobs waiting for them.  What to do, what to do?  And (for us normal people) what the heck is going on, anyway?  What is causing all the fuss? 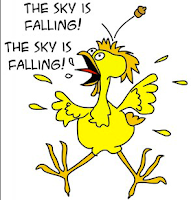 The prices of basic commodities are going into the cellar, that’s what.  The sky, er, the price level is falling.  We’re all doomed.  This is a “crisis,” at least according to those people who make their money by moving money, i.e., those whom Pope Pius XI described in the following terms:

“In the first place, it is obvious that not only is wealth concentrated in our times but an immense power and despotic economic dictatorship is consolidated in the hands of a few, who often are not owners but only the trustees and managing directors of invested funds which they administer according to their own arbitrary will and pleasure.

“This dictatorship is being most forcibly exercised by those who, since they hold the money and completely control it, control credit also and rule the lending of money. Hence they regulate the flow, so to speak, of the life-blood whereby the entire economic system lives, and have so firmly in their grasp the soul, as it were, of economic life that no one can breathe against their will.” (Quadragesimo Anno, §§ 105-106.)

To a normal person, however, falling prices for basic commodities is a good thing, whether you’re a producer or a consumer (in a Kelsonian world, of course, you’d be both).  Everybody needs the three Fs, food, fuel, and fiber.  How much they buy, however, depends on how much their money is worth.  When prices go up, people buy less.  When prices go down, people buy more, at least until their wants and needs are satisfied (we won’t bore you with the Theory of Marginal Utility today, however; just assume — contrary to what economists tell you — that people can be satisfied in both their wants and their needs).

In accordance with the laws of supply and demand, and everything else being equal, if prices fall for basic commodities, all other prices will fall as producers’ costs go down.  Because the money people have will buy more goods and services, producers will make more at a lower cost to meet the increased demand.  To do so, producers will expand operations or (as the politicians put it) “create jobs.”  In this way demand increases without the government manipulating the money supply artificially by emitting debt-backed money, and economic growth can proceed at a reasonable rate.

But wait!  The global economic system is predominantly Keynesian.  Our Saving Lord Keynes (as he must be known, as he proclaimed in his Economic Gospel that it is impossible to finance expansion of operations without first saving) insisted that you have to have inflation in order to generate savings.

How’s that work?  It’s kind of sneaky.  In order to generate savings in the Keynesian model somebody either has to cut consumption, or produce something useless that nevertheless has a market (nobody ever said it had to make sense; one of these days we’re going to draw up a list of all of Keynes’s contradictions).  When the government prints money backed by its own debt (or the money itself is the debt) to buy stuff, this creates more money “chasing” the same goods and services, which drives up the price level.  This forces consumers to buy less using more inflated money, and shifts purchasing power (savings) from consumers to producers.

Translation: You got $1 per hour, but when you went to spend it, it was only worth half an hour because the government poured twice as many dollars into the economy without producing anything.

The Keynesian idea is thus bad even when it works — consumers get nothing for something, and producers get something for nothing.  The problem is that it doesn’t work, because instead of hiring more workers and “creating jobs,” producers are investing in technology that displaces workers and eliminate jobs, so people stop consuming unless the government inflates the currency even more to finance welfare.  That’s how you can have a “jobless recovery.”

So why are falling prices, contrary to the Keynesian model, a good thing, not a bad thing?

First, we have to understand that “reality economics” (as opposed to Keynesian economics) is based on Adam Smith’s dictum from The Wealth of Nations that “Consumption is the sole end and purpose of all production.”  Falling prices of basic commodities is a boon, for it allows producers to make more at less cost, and consumers to get more for the same price.

Further, if everyone had the opportunity and means to own the capital that is taking away their jobs, then everything would equalize.  It wouldn't matter what the price was, for production would be equal in the aggregate to income, per Say’s Law of Markets.

That is, when everyone has the opportunity and means to be productive, then rational people only produce what they can consume for themselves, or trade for the productions of others to consume that.  In this paradigm, “money” is not something only the government creates.  In fact, the government shouldn’t be creating money at all.

That’s because money is simply the medium through which one person exchanges what he or she produced for what others produced — and government doesn’t produce anything.  Thus, when government starts creating money backed by its own debt, all bets are off.  That’s because it’s consuming without producing.

But how do you get out of financing capital ownership with past savings?  By using “future savings.”  Future savings represent the present value of future increases in production.  This is in contrast to past savings, which are past decreases in consumption.  Using future savings ensures that (as Leo XIII put it) as many as possible of the people prefer to own capital.  One way of doing that is through Capital Homesteading.