This week’s news items reflect the almost complete disconnect between production and consumption, and thus between producers and consumers, throughout the world.  In accordance with Say’s Law of Markets, consumption should equal production, since Adam Smith’s first principle of economics is that “Consumption is the sole end and purpose of all production.”  When people produce far more than they can consume, and others can’t produce at all, then the obvious solution is to turn everyone into a producer, and that means expanded capital ownership: 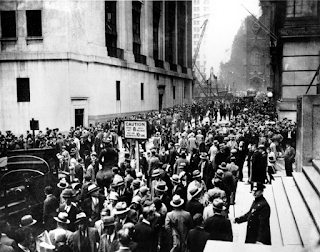 • Stock Market Madness.  Despite — or perhaps because of — the economic effects of the pandemic and the fact that governments are flooding the global economy with massive amounts of money backed with their own debt, the stock market is rising to dizzying new heights. This, of course, completely disproves the prevailing belief that the stock market is either a wealth generator or an economic indicator, for none of what is happening on the world’s stock exchanges has any connection to what is going on in real life.  Instead (as should be obvious by now, but isn’t), the rise in stock prices can be traced directly to the fact that massive amounts of funny money are being funneled into commercial channels and instead of being used to “create jobs” is going straight to the stock market, where the huge increase in demand is reflected in stock prices reaching astronomical levels.  This is not because “the economy” is doing well, but because — consistent with the laws of supply and demand — stock prices are going up simply because more people are using their money to gamble on the secondary market instead of investing in the primary market.  The same thing happened in the 1020s, except then the underlying economy was sound, whereas today it’s been gutted.

• Worker Ownership Support.  As reported on the blog of the National Center for Employee Ownership in Oakland, California, the Aspen Institute has come out in favor of worker ownership.

• Worker Ownership and Job Environment.  The NCEO also reports that of the hundred best companies to work for in 2020, fifty-nine of them had worker ownership.  Evidently, expanded capital ownership is good for people and for the economy.  It therefore makes sense that everyone, not just workers employed by corporations, should be able to participate in ownership on equitable terms. • Top 679 See Wealth Increase.  The NCEO also reports that the U.S. billionaires club, with 679 members, had an increase in net wealth of $1.3 trillion during the pandemic.  This is probably due to the massive amounts of stimulus money flowing into the stock market instead of to the real, primary economy.

• Sensus Fidelium Videos, Update.  CESJ’s series of videos for Sensus Fidelium are doing very well, with nearly 150,000 views in total.  The latest available Sensus Fidelium video is still “A Theory of Human Dignity,” as this week’s recording was postponed.  The video is part of the series on the book, Economic Personalism.  The latest completed series on “the Great Reset” can be found on the “Playlist” for the series.  The previous series of sixteen videos on socialism is available by clicking on the link: “Socialism, Modernism, and the New Age,” along with some book reviews and other selected topics.  For “interfaith” presentations to a Catholic audience they’ve proved to be popular, edging up to 150,000 views to date.  They aren’t really “Just Third Way videos,” but they do incorporate a Just Third Way perspective.  You can access the playlist for the entire series  The point of the videos is to explain how socialism and socialist assumptions got such a stranglehold on the understanding of the role of the State and thus the interpretation of Catholic social teaching, and even the way non-Catholics and even non-Christians understand the roles of Church, State, and Family, and the human person’s place in society.