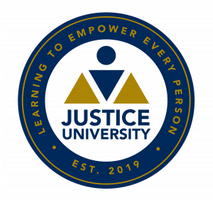 That is, a lack of understanding of what social justice really is.  The others are:

·      The “slavery of past savings,” which (among other things) is the idea that you can’t have expanded capital ownership without redistribution,

·      The “Currency Principle” versus the “Banking Principle,” or what is money and how does it work,

·      The idea that solutions to these “roadblocks” can work individually but not together as a system.

So, let’s get started:

And right away we need to explain our explanation.  The classic individual virtues are directed to the good of individuals, that is, to natural persons.  It doesn’t matter whether you’re talking a single person or everyone on Earth.  If something is done directly to or for that person or persons, it is (and will always be) individual in nature.  If you give a dollar to everyone on Earth, that is as individual in character as giving a million dollars to one person.  It is the fact that natural persons are the objects of the acts, not the number of natural persons, that makes the virtue (or vice) individual.

Every effort must therefore be made that fathers of families receive a wage large enough to meet ordinary family needs adequately. But if this cannot always be done under existing circumstances, social justice demands that changes be introduced as soon as possible whereby such a wage will be assured to every adult workingman. (Quadragesimo Anno, § 71.)

CESJ co-founder Father William Ferree’s analysis of this particular passage in his pamphlet Introduction to Social Justice (1948) is an eye-opener for many people who either don’t read carefully, or simply impose their preconceptions on what they read or hear:

Now if we were to hand this quotation to a number of people, and ask each one of them what Social Justice demands in it, almost every one of them would answer, “A family wage.”

They would all be wrong! Look again at the syntax of the sentence: the direct object of the predicate “demands” is the clause “that changes be introduced into the system.” The Pope’s teaching on the family wage is that it is due in commutative or strict justice to the individual worker; — what Social Justice demands is something specifically social: the reorganization of the system. For it is the whole system which is badly organized (“socially unjust”) when it withholds from the human beings whose lives are bound up in it, the power to “meet common domestic needs adequately.” (Rev. William Ferree, S.M., Introduction to Social Justice. New York: The Paulist Press, 1948, 11.)

Not surprisingly, Pius XI was aware that people were reinterpreting what he wrote almost as fast as he could write it.  So was Father Ferree, as he made clear in his own writings coincidentally forty years after he had first analyzed Pius XI’s social doctrine.  Before that, however, Father Ferree continued the above commentary by noting,

The Holy Father later summarized the teaching of Quadragesimo Anno in several paragraphs of Divini Redemptoris (“On Atheistic Communism”). In Paragraph 53 of this latter document he gives a very clear example for his teachings:

It happens all too frequently, under the salary system, that individual employers are helpless to insure justice, unless, with a view to its practice, they organize institutions whose object is to prevent competition incompatible with fair treatment of the workers. Where this is true, it is the duty of contractors and employers to support such necessary organizations as normal instruments enabling them to fulfill their obligations of justice.

Here the two levels of justice are clearly distinguished. On the level of commutative or individual justice the employer is helpless, and note that this happens “all too frequently.” Now evidently, if he is really helpless to do full justice, he does not sin when out of sheer necessity he falls short of justice. In individual justice the case is closed, for the employer can do nothing about it; and the injustice must be allowed to continue out of sheer inability to stop it.

Above this field of individual justice, however, there is the whole field of Social Justice, and in this higher field the case is never closed. The “helplessness” of individuals comes from the fact that the whole industry is badly organized (“socially unjust”). Social Justice demands that it be organized rightly for the Common Good of all who depend upon it for their welfare and perfection. Therefore employers have the duty — the rigid duty of Social Justice which they cannot disregard without sin-to work together (socially) to reorganize their industry. Once this reorganization (act of Social Justice) has been accomplished by group (social) action, then the employers will no longer be helpless in the field of individual justice, and will be under obligation to meet their strict duties in this latter field. (Ibid., 11-12.)

Of course, focusing on the whole just wage issue obscures the point of Catholic social teaching, which is not individual, but . . . specifically social.  The whole idea of Catholic social teaching is not material wellbeing or spiritual development.  That is, and will always be, the object of Catholic individual teaching, whether we’re talking about temporal or spiritual goods.  Whether someone has a comfortable or even bearable material life or develops spiritually to get to Heaven or wherever you want to end up in your faith or philosophy is and will always be individual in character.  Period.

The Catholic Church’s social doctrine is directed not to natural persons, but to artificial persons and institutions.  The object of social virtue is not to provide directly for any individual good for natural persons in any way, shape, or form.  It is, rather, to (and read this VERY CAREFULLY) — hold your breath — to make individual goods and virtues possible, not to substitute for them or provide them in any way.

Believe it or not (and many people will absolutely refuse to believe it), that is exactly what Pius XI declared in no uncertain terms in Quadragesimo Anno.  As he said (and, again, read it carefully),

What We have thus far stated regarding an equitable distribution of property and regarding just wages concerns individual persons and only indirectly touches social order, to the restoration of which according to the principles of sound philosophy and to its perfection according to the sublime precepts of the law of the Gospel, Our Predecessor, Leo XIII, devoted all his thought and care.  (Quadragesimo Anno, § 76.)

Could Pius XI have said it any clearer?  Probably not, so — of course — generations of “experts” who have a vested interest in the usual way of understanding Catholic social teaching have gotten it wrong.  Worse, they have ignored or even attacked anyone who suggested there might be a reason-based alternative to their faith-based “enthusiasm” (to use Msgr. Knox’s term) that has corrupted academia, emptied churches, alienated people, vested the State with immense power, imposed gargantuan public and private debt, . . . the list is endless.

Nevertheless, there is hope . . . if people can wake up (instead of becoming “woke”), and get to work removing the barriers or “roadblocks” that inhibit or prevent a more just and humane future for every child, woman, and man. — which is the subject of the next posting on this topic.