The Circle of Ownership

As we saw in theprevious posting on this subject, the idea that labor, whether by itself or “enhanced” by capital, is responsible for all production cause a few problems with consistency or even common sense.  A large measure of this is due to the fact that common sense and natural law both support the right of an owner to the fruits of ownership: income and control.  Capitalists and socialists both agree on that.  The only argument relates to what can legitimately be owned and what is productive — and that is a problem. 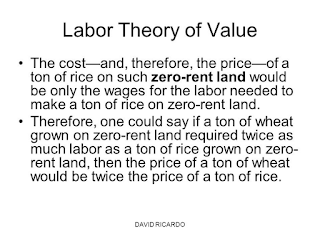 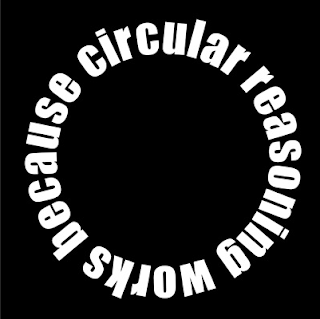 This is what is called in logic circulus in probando, “circular reasoning,” as the premise and the conclusion are identical, i.e., “A is B because B is A” — “Property in capital is different from property in labor because property in labor is different from property in capital.”
In socialist theory, then, people therefore have the right to own that which labor produces, but not that which capital produces.  The former is a right by nature, the latter is a social convention allowed for the sake of expedience until the Kingdom of God on Earth can be established.  (Socialism is not consistent on this point.  A principle of social credit is that technology may be privately owned, but what technology produces belongs to everybody.)
This theory violates the first principle of reason as expressed in both the law of contradiction and the law of identity.  The law of contradiction — that nothing can both “be” and “not be” at the same time under the same conditions — is violated by asserting that the right to be an owner both is, and is not, a natural right.
The law of identity — that which is true is as true and is true in the same way as everything else that is true — is violated by asserting that “ownership” means something fundamentally different depending on what is owned.  A natural right is made conditional, which means it is not a natural right.
Because in Catholic belief God is the natural law, modernism is an essential adjunct to socialism.  To make socialism plausible, the definition of God must be changed from the Supreme Being and Creator, to an inferior created being, and the natural law shifted from something discerned by reason, to something accepted on faith.
Compared to the ingenious justifications for socialism, that for capitalism is almost trite.  Where socialism eliminates the natural law, using modernism to redefine or abolish God, capitalism leaves God alone, sometimes forgetting Him altogether.  Capitalism contents itself with distorting the natural law by limiting its applicability to what the English economist and political theorist Walter Bagehot (1826-1877) called “a chosen people.” (Walter Bagehot, The English Constitution. Portland, Oregon: Sussex Academic Press, 1997, 17.)
In common with the popes and natural law advocates through the ages, Kelso realized that the only way to make the economy work for everyone is to make it possible for everyone who consumes to produce what he consumes, and for everyone who produces to consume what he produces — Say’s Law of Markets, named for Jean-Baptiste Say (1767-1832), who was not the first to state this “law,” but gave it its best expression in his refutation of the theories of Reverend Thomas Robert Malthus (1766-1834), author of An Essay on the Principle of Population (1798).  See “Letter Number 1,” Jean-Baptiste Say, Letters to Mr. Malthus.  London: Sherwood, Neely, and Jones, 1821.  In this way consumption (demand) would be in balance with production (supply), because production (supply) would equal income (demand).
Also in common with the popes, Kelso concluded — given that advancing technology is displacing human labor from production — that the way to make everyone productive is to make it possible for “as many as possible of the people to become owners” of capital. (Rerum Novarum, § 46.) The only question was how.
As we shall see in the next posting on this subject, he answer lay in the American experience.
#30#
Posted by Michael D. Greaney at 6:00 AM