Immediately after news reports that the stock market was going to end the month of August by rising and recouping losses, it plunged.  As this is being written, however, it may turn around again.  In real news affecting real life:


• Hong Kong Crackdown.  In what could suddenly go in unexpected ways, “authorities” in Hong Kong appear to have begun a new phase of repression, (re)arresting Joshua Wong, arresting Agnes Chow and Andy Chan, and “detaining” — comspeak for arresting — an uncertain number of others, possibly hundreds, many of whom are expected to disappear mysteriously over the coming days and weeks.  Of course, it is difficult to see what choice Xi had.  If the Chinese government respected human rights and the will of the people, Party leadership would lose power.  There may be a loss of international prestige with a crackdown, but as Machiavelli said, it is better to be feared than loved.  Terror must be continued and the aura of invincibility maintained in order to persuade more client states, especially in Africa, to come under the strong Chinese umbrella instead of relying on the weak capitalist countries for the economic benefits and job creation that will presumably result.  Unfortunately, the rise of China to the second largest economy in the world has been built on government debt and “ghost” investments that waste precious resources.  Like every other pyramid scheme, the Chinese economy must either keep expanding or collapse . . . and it is reaching the point of maximum feasible expansion.  Vapid historians forget that the ancient Roman Empire lasted as long as it did because Rome acquired territory in order to develop it and make it profitable, not to loot it (that usually came later, when politicians needed to make money). 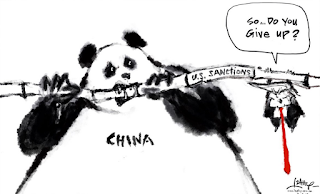 • Democratic Wealth Taxes.  A number of the Democratic contenders for the U.S. presidency have suggested several forms of a wealth tax intended to confiscate some of the trillions of dollars held by the rich for the benefit of the non-rich . . . or, at least, that is the theory.  These range from taxing unrealized gains on assets of all kinds to taxing the wealth itself over a certain amount.  At the heart of the proposals is the fixed belief that the rich have the stuff in sackfulls just lying around.  People forget that most of the wealth owned by the wealthy is in the form of productive assets.  In order to pay a wealth tax, it usually involves liquidating (“selling”) all or a portion of the wealth to have enough cash to do so.  Forced sales of that sort tend to drive down the values of assets, and almost never generate the anticipated revenue.  Plus, liquidating capital assets means finding a buyer, and today that usually means (you guessed it) China, which is buying up foreign capital by overleveraging debt instead of increasing domestic capacity.  A wealth tax would not generate enough revenue to justify it in the first place, and would lead to further shifts of capital ownership overseas, with probable job loss as the Chinese begin cutting costs to make the new capital recoup its purchase price.  It would be a much better idea to stop using the tax system for anything except raising revenue, and turn from trying to get more taxes out of fewer people, to getting fewer taxes out of more people, as proposed in CESJ’s Capital Homesteading reforms.
• John Paul II and Socialism.  In pursuance of an upcoming book on economic personalism (below), we have been uncovering little-known facts about the life and times of Pope John Paul II, especially his work in the area of personalism and solidarity.  It turns out that much of what people think they know about these subjects simply isn’t so.  Personalism is not a philosophy of Christian anarchism, any more than solidarity is socialism with a Christian or democratic whitewash.
• Power With Justice.  CESJ’s upcoming book on economic personalism with the working title of Power With Justice, is in the third round of editing.  Assuming final changes can be made by the middle of September, the short book may be available by the beginning of October.
• Shop online and support CESJ’s work! Did you know that by making your purchases through the Amazon Smile program, Amazon will make a contribution to CESJ? Here’s how: First, go to https://smile.amazon.com/.  Next, sign in to your Amazon account.  (If you don’t have an account with Amazon, you can create one by clicking on the tiny little link below the “Sign in using our secure server” button.)  Once you have signed into your account, you need to select CESJ as your charity — and you have to be careful to do it exactly this way: in the space provided for “Or select your own charitable organization” type “Center for Economic and Social Justice Arlington.”  If you type anything else, you will either get no results or more than you want to sift through.  Once you’ve typed (or copied and pasted) “Center for Economic and Social Justice Arlington” into the space provided, hit “Select” — and you will be taken to the Amazon shopping site, all ready to go.
• Blog Readership.  We have had visitors from 26 different countries and 36 states and provinces in the United States and Canada to this blog over the past week. Most visitors are from the United States, India, Philippines, Uganda, and Australia.  The most popular postings this past week in descending order were “Redefining Natural Law,” “Another Louis Kelso Video,” “Dorothy Day, Catholicism, and Communism, Part I,” “News from the Network, Vol. 12, No., 34,” and “The Theory and Practice of Ownership.”
Those are the happenings for this week, at least those that we know about.  If you have an accomplishment that you think should be listed, send us a note about it at mgreaney [at] cesj [dot] org, and we’ll see that it gets into the next “issue.”  Due to imprudent language on the part of some commentators, we removed temptation and disabled comments.
#30#
Posted by Michael D. Greaney at 6:00 AM