Things are a little quiet due to the fact that expanded ownership initiatives are waiting to see what comes out of the ESOP Association conference next week, but some ongoing projects are making progress, and of course there are more personal matters:


•.Jonathan Robert Spencer, RIP.  Jonathan Spencer, 58, who worked with the CESJ core group and others organizing the attempt for a worker buyout of Ogleby-Norton, passed away on May 13, 2019.  Jonathan is predeceased by his parents, Elliot and Helen Spencer. He is survived by his brothers; Scott (Alice), Steven (Lynne), and Brad; his niece Laura Costello (Sean); his nephews, Ryan Spencer, Michael Spencer (Alex), Christopher Spencer, Garett Randall and Cameron Yip; his grandniece Riley Heather Costello and his grandnephews Miles William Costello, Zayden Randall, and Jamison Randall.  Jonathan graduated from Brown University and received a law degree from Duke University School of Law. He served as the General Counsel of the Museum of Science Fiction,  Vice President and Associate General Counsel of Verisign, General Counsel of Shenandoah Telephone Company, and Associate General Counsel of Cable and Wireless.

• Justice University.  Progress is being made in advancing the concept of Justice University.  An “imprint” has been established for the university press, and a logo and a motto have been agreed upon.  This might sound as if organizers are afflicted with the “Build it and they will come” mentality, but that is not the case.  A great deal of thought and planning has gone into the substance of Justice University, but it is difficult to report on abstract discussion and easy to talk about things such as a motto and seal . . . not to mention imprints —
• Justice University Imprint.  As the “pilot product” of the Justice University Press, the core group has assembled a compendium of the shorter writings of CESJ co-founder Father William J. Ferree, S.M., Ph.D.  Currently in editing, the compendium includes Introduction to Social Justice (1948), Discourses on Social Charity (1966), “A Dialogue of the Deaf: Remarks Before the Lay Commission on the Economy, September 11, 1984,” and A Turning Point in History (1985). 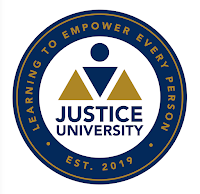 • Catholic Action Manuscript Submitted.  CESJ’s Director of Research has submitted a manuscript on “Catholic Action,” the program reformed by Pope Pius XI to implement his social vision within the Catholic Church.  The ultimate idea was for other organizations to follow in their particular faith and philosophical traditions (e.g., Jewish, Muslim, Protestant, even secular) to organize and work together to put society back on a rational basis with a common understanding of the natural law.  The book shows where the effort got off track and what can be done to restart the effort from an interfaith and inter-philosophical perspective.
• Shop online and support CESJ’s work! Did you know that by making your purchases through the Amazon Smile program, Amazon will make a contribution to CESJ? Here’s how: First, go to https://smile.amazon.com/.  Next, sign in to your Amazon account.  (If you don’t have an account with Amazon, you can create one by clicking on the tiny little link below the “Sign in using our secure server” button.)  Once you have signed into your account, you need to select CESJ as your charity — and you have to be careful to do it exactly this way: in the space provided for “Or select your own charitable organization” type “Center for Economic and Social Justice Arlington.”  If you type anything else, you will either get no results or more than you want to sift through.  Once you’ve typed (or copied and pasted) “Center for Economic and Social Justice Arlington” into the space provided, hit “Select” — and you will be taken to the Amazon shopping site, all ready to go.
• Blog Readership.  We have had visitors from 32 different countries and 46 states and provinces in the United States and Canada to this blog over the past week. Most visitors are from the United States, Spain, the United Kingdom, Australia, and Italy.  The most popular postings this past week in descending order were “Aquinas on Private Property,” “Chesterton and Shaw: the Lost Debate,” “Evelyn Waugh on Vatican II,” “News from the Network, Vol. 12, No. 14,” and “More Waugh on Vatican II.”
Those are the happenings for this week, at least those that we know about.  If you have an accomplishment that you think should be listed, send us a note about it at mgreaney [at] cesj [dot] org, and we’ll see that it gets into the next “issue.”  If you have a short (250-400 word) comment on a specific posting, please enter your comments in the blog — do not send them to us to post for you.  All comments are moderated, so we’ll see it before it goes up.
#30#
Posted by Michael D. Greaney at 6:00 AM