The “Marketplace of Faith”?

There was an interesting article in last year’s Wall Street Journal (yes, we’ve been dying to use that line since last week . . . that is, last year) asking the question, “Why are Americans so religious?”  (“The Marketplace of Faith,” 12/28/18, A-10).  Sriya Iyer, who wrote the piece, is also the author of The Economics of Religion in India (2018).  She argues in part that in America there is more competition between religions and between religion and the government.  With more choices for basic services, competition — and institutions providing that competition — will thrive.


There is some merit in Ms. Iyer’s analysis, but having acknowledged that, she missed the whole point of religion and why, despite so much effort to remove as much religion from civil, domestic, and — yes — religious life as possible, Americans are still religious.  And, yes, the so-called “New Christianity”/”Neo-Catholicism” — what used to be called “the democratic religion” until people finally settled more or less on “socialism” and “modernism” — was always intended as a way to make religion more “relevant” to the world, updating doctrines and beliefs until they fit in with secular society.
Ms. Iyer’s analysis and the goal of the socialists and modernists, as we said, misses the whole point of religion.  It is not to compete with civil society, but to fill a need that civil society does not and should not fill, any more than the family can.  As Church becomes viewed as something in competition with State and Family, and as merely one alternative among many for providing basic services (Ms. Iyer lists a number of economic services provided by organized religion in India in competition with government and private sector enterprise, a situation she sees duplicated in America), people gradually lose interest in religion’s actual role.
And that is?  Organized religion has a twofold role with respect to the human person, corresponding to people’s individual and social natures.  Any religion that fails to meet both of these needs soon finds itself irrelevant.  It may linger on for a time, sometimes centuries, but will eventually simply fade away.
One, with respect to a person’s spiritual and moral development, a religion must provide a basic moral framework and philosophy, directed toward that person’s proper end.  That end may be to be united with God in Heaven, with Satan in Hell, to be absorbed into the World Spirit, attain Nirvana, simply disappear at death, or whatever.  The spiritual aspect of any religion must be directed to helping each human being to become more fully human in order to prepare him or her to be fitted for his or her proper end.  That aspect of religion must be based on free will and is up to each person’s conscience.  We can say nothing more about it, nor should we.  This is the individual aspect of religion.
Two, there is the social aspect of religion, that is, how religious faith relates to the surrounding civil and domestic societies.  This is what Alexis de Tocqueville spoke of in Democracy in America when he noted that while it is of overriding importance that someone’s religion be true, it is a matter of complete indifference to the State as long as the religion does not teach anything contrary to a well-ordered society.
And therein lies the main problem organized religion faces today, whether Pagan, Jewish, Christian, Muslim, or anything else.  When any organized religion exceeds its natural bounds and tries to provide what families, governments, and the private sector are supposed to be providing, then it does not make itself more relevant to modern life, but less.
We are not talking here about what Catholics call “the Corporal Works of Mercy,” i.e., feed the hungry, give drink to the thirsty, shelter the homeless, visit the sick, visit the prisoners, bury the dead, and give alms to the poor.  These are things people should do individually or in an organized way through a church.
Nor are we referring to “the Spiritual Works of Mercy,” i.e., counseling the doubtful, instructing the ignorant, admonishing the sinner, comforting the sorrowful, forgiving injuries, bearing wrongs patiently, and praying for the living and the dead.  These, too, are things people should do individually or (in certain circumstances) in association with others.
Organized religion offers a backup to domestic and civil society for the corporal and spiritual works of mercy when a family or other people fail to do so.  None of the works of mercy are the primary job of either organized religion or government.  Efforts to make them so has made organized religion irrelevant and bloated the State far beyond even the shadow of its legitimate role.
This is not to say that governments and organized religions do not have a role to play in providing for such things, but it should always be viewed as a backup to individual efforts or as expedients.  Even the immense charities and educational institutions run by organized religion are not the primary job of religion in civil or domestic society.
If not that, however, then what?
To teach fundamental principles of how to be more fully human.  This is essential to both individual and social life.
Now, it is perfectly true that, strictly speaking, it is possible to come to knowledge of God’s existence and of the natural law (the general code of human behavior) through the force and light of human reason alone.  Strictly peaking.
It is also perfectly true that most people have neither the time nor the inclination to undertake the immensely long and arduous task of doing so, that is, of working out knowledge of God’s existence and of the natural law.
That is why, as G.K. Chesterton reminded us in his sketch of Thomas Aquinas, that Aquinas argued most people need a revealed religion and an organized church of some sort to teach them basic principles of how to become and be human beings.  The task is simply too much for most people.
Thus, while as de Tocqueville noted that it is of the utmost importance that someone’s personal faith be true in everything (and, frankly, if you do not believe that your religion is true, you are in the wrong religion), it is of equally great importance for the rest of society that whatever faith or faiths are espoused not be false. 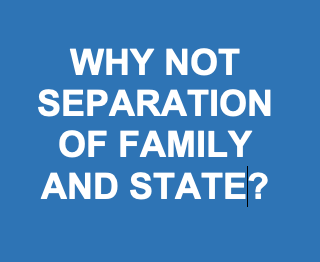 That is, the basic moral principles of any faith or philosophy must be in conformity with the precepts of the natural law, and all three societies, Church, State, and Family, must be based on those principles, however they are applied, and integrated into all aspects of life, both individually and institutionally.  Governments must stay out of purely religious matters, just as religions must stay out of purely political matters, but that still leaves a broad area in which Church, State, and Family must cooperate or at least not contradict one another.
For example, a religion that practices human sacrifice violates the natural law right to life, and the civil authorities can (and must) interfere.  A family that sentences one of its members to death equally violates the right to life, and both civil and religious authorities have the duty to prevent such a sentence from being carried out.  A government that permits or (worse) funds or even mandates abortion also violates the right to life, and individuals, families, and religions are fully within their rights — and their duties — to oppose abortion by all legitimate means.
At the same time, organized religion should not try and usurp the role of the State or the Family, nor the other way around.  Attempts to merge the three societies and concentrate power inevitably end up in anarchy or totalitarianism.
Thus, while we personally find Ms. Iyer’s analysis superficially attractive — competition is almost always a positive good when not pursued as an end in itself and kept within bounds — it should be competition between competing ideas and rivals in the same field.  Church, State, and Family each have a special role to play, and setting them up in competition with one another is a sure path to destroying the weaker society.
#30#
Posted by Michael D. Greaney at 6:00 AM