A few weeks ago we got a response to one of our blog postings on democratic socialism from a (gasp) democratic socialist!  Now, that in and of itself was not unusual.  What really threw us was the fact that this one was actually civil and seemed honestly to be seeking information.  Here’s what the DS said:


I come from a left-leaning family (or at least I received a lot of influence from my brothers in this respect), and I also spent a lot of time at the Catholic Newman Center on my campus. I always found the socialist arguments very convincing — it was always the idea that society should be governed from the bottom up. For a while I was also very convinced by the Catholic perspective, especially by Rerum Novarum, a document I love. But, at the Catholic center, and by friends who are conservatives, the representation of socialism which they attack like an effigy is more like a straw-man or piñata than the real thing. So I've never been convinced that socialism is wrong, because the arguments I've hear against it, I see, have never been against what I actually know it to be. To me, it's really worker ownership of the means of production — direct ownership, not state ownership. It doesn't involve the abolishment of property. I wouldn't call myself a socialist, though. Rather, I would call myself someone who advocates for a greater consciousness by both sides of the nuance of each perspective. This also means understanding the conservative perspective. My political faith is that if we communicate our ideas more perfectly, by building bridges and nurturing relationships, we can agree, and we can accomplish great things as a nation and as a humanity.
Right off the bat you can see there are some serious problems.  Not with the DS . . . with the belief that what he (or she) was talking about was socialism!  This is a very revealing statement from someone who calls himself a democratic socialist if only because it makes us wonder how many more there are out there who call themselves democratic socialists — or any other kind of socialist — and have these same beliefs and opinions. 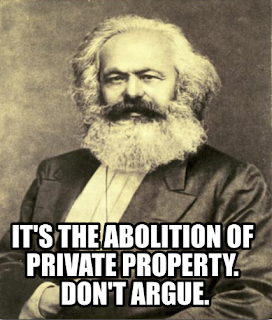 First off, this so-called “democratic socialist” isn’t even a socialist!  As he said, “To me, it’s (socialism) it’s really worker ownership of the means of production.”  Given that Karl Marx defined socialism as the abolition of private property, as did Pope Leo XIII, clearly what we have here is a failure to communicate.  The DS is defining socialism as widespread capital ownership and in the same breath correctly states that what he’s talking about isn’t socialism!
Our DS is also correct that we need to build bridges and nurture relationships.  And the place to start is with defining our terms.  Frankly, what happens more often than not these days is people hearing a word like socialism or capitalism and go to total war before they even know what is being said.
We’re not being snarky or rude, then, by taking the DS’s comments and dissecting them.  He is wrong in almost everything he said, but that’s actually a good thing.  So to begin:
1. “Socialism . . . was always the idea that society should be governed from the bottom up.”
No, that’s not socialism, that’s subsidiarity.  Socialism, while it claimed from the beginning to be democratic, has always ended up being that the élite in charge of the community end up governing because they have the power.
2. “So I've never been convinced that socialism is wrong, because the arguments I've hear against it, I see, have never been against what I actually know it to be. To me, it's really worker ownership of the means of production — direct ownership, not state ownership..”
What the DS believes isn’t wrong because it’s not socialism!  He was never able to agree with the so-called conservatives because they were not speaking the same language.
3. “I wouldn't call myself a socialist, though. Rather, I would call myself someone who advocates for a greater consciousness by both sides of the nuance of each perspective.”
Our DS can’t call himself a socialist because he’s not a socialist.  Advocating greater consciousness on both sides?  Of course.  And it needs to start with getting a clear picture of what everyone is talking about.
For that, the CESJ “comparison matrix” is probably a good place to start.  It’s a two-pager, so we just put up a portion of one page here, but it’s enough to give you a feel for it. 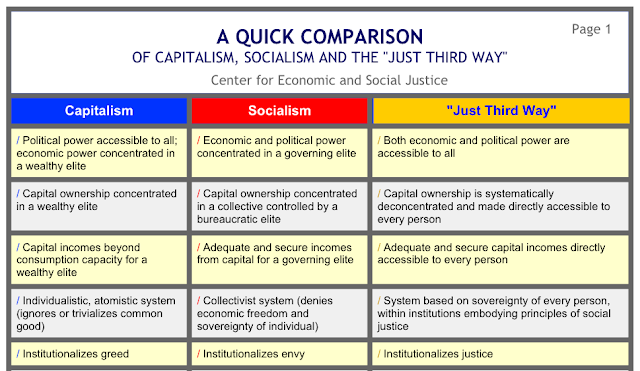 In any event, as you can see, our “democratic socialist” is nothing of the sort.  At worst, he is simply very confused about terminology . . . and that’s not his fault.  That’s what Academia is turning out these days.
#30#
Posted by Michael D. Greaney at 6:00 AM