This year marks the twenty-fifth anniversary of a publishing event: Curing World Poverty: The New Role of Property.  A “small press bestseller,” the book is even more relevant today than it was a quarter of a century ago.  (The criteria for determining bestseller status are admittedly flexible, and this was “pre-Amazon” sales, but back in the day, 3-5,000 was considered a small press bestseller, and Curing World Poverty sold over 5,000 copies without remaindering.)

Because this is the silver anniversary of an important book, CESJ is planning on releasing a special Commemorative Edition.  Except for the correction of any typos, updating the copyright and ISBN information, and adding a short foreword, the Commemorative Edition will be identical to the original.
Why reissue a book that’s twenty-five years old?  How is it still relevant?  Hasn’t the world changed so much in the last quarter century that nothing in the book even applies today?
Yes — and no.
Yes, many of the specific situations have changed drastically.  The global economy is more unstable, poverty is more widespread, technology is replacing more and more people at an accelerating pace, terrorism is up, crime is up, academic standards and incomes are down. . . .
Yes, the world is a much more frightening place than it was twenty-five years ago.
And, no.  In essence, there is really nothing different today than twenty-five years ago, or even twenty-five hundred years ago.  People still have to make a living, and even twenty-five hundred years ago or twenty-five thousand, that meant they need capital instruments of some kind.
Human beings are toolmakers and users, and they need tools in order to produce what they need or want to consume.  If you don’t own tools, then you will be dependent on those who do own tools.  That’s the same whether we are talking about a sharp stick or a rock, or an automated factory.  Those who do not own are at the mercy of those who do own. 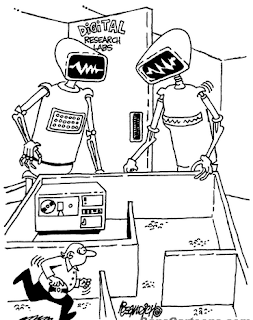 Unfortunately, as technology has advanced and made it possible for everyone on Earth to lead a decent and fulfilling life, access to that technology has become increasingly difficult, even impossible.  That is, impossible if we assume as a given that the only way that some people can have capital is by taking it away from others . . . and then we are not respecting the dignity and thus the rights of everyone.
It is as unjust to declare that the rich have no right to own what they have as it is to insist that the poor have no right to own anything.  Either everyone’s rights must be respected, or no one’s rights can be respected.  Violating even one person’s rights, even for the best reason in the world justifies violating another person’s rights for a reason that is not quite as good, and finally for no reason at all.  It is not acceptable that even one innocent person’s rights be violated even to save the whole world.
So, what is to be done?  That is the question answered in Curing World Poverty, and it’s been the same question from the dawn of history.
We think, however, that the approach taken in the book is something that a lot of people simply have not thought about.  Once they do, they will see the wisdom of organizing to make every child, woman, and man into a capital owner, and leave such things as welfare, Social Security, the Universal Basic Income, and so on, to be used as necessary — and they are essential in the current state of society — until key institutions such as money and credit and the tax system can be restructured into more just arrangements.
That is why CESJ is reissuing a twenty-five year-old book.  The problems it addresses are still with us.  And if we don’t want to see them still around in another twenty-five years, it might just be time to read through Curing World Poverty, bring it to the attention of leaders at every level, and get busy fixing the system instead of waiting for someone else or the State to save the world.
They haven’t done a very good job up to now.  You can surely do better.
#30#
Posted by Michael D. Greaney at 6:00 AM