Why the Money Multiplier Doesn’t Work, I: Introduction


You don’t want to take our word for it, though.  You can work it out for yourself on paper just by drawing a flowchart, or “following the money” by tracing the transaction with “T accounts.”  That is, in fact, what Dr. Harold G. Moulton did back in 1935, soon after the money multiplier theory came out.  Moulton disproved it almost immediately, so (of course) it has become political and economic orthodoxy that must not be questioned.
This is shown in Chapter VI of The Formation of Capital, “Commercial Banks and the Supply of Funds.”  Today’s selection is from page 75 to page 77 of both the 1935 and 2010 editions.
In order to set the stage for the analysis in this and following chapters, it is necessary briefly to summarize our findings up to this point. We raised at the beginning a basic problem of economic organization, asking whether the apparent necessity of reducing the flow of funds through consumption channels in order to provide funds for capital formation did not result in an economic dilemma. At the end of Chapter III we arrived at the conclusion that if capital formation is to take place on an extensive scale, there must be a simultaneous expansion in the flow of funds through consumption and investment channels. In Chapter IV a second conclusion was reached, namely, that expansion and contraction in the output of capital goods and consumption goods, in fact, occur not alternately but concurrently. In Chapter V we found that fluctuations in business activity in the United States have usually manifested themselves first in changes in the output of consumption goods rather than of capital goods.
The analysis of consumption in relation to capital formation which we have made in the last two chapters has run in terms of the actual production of goods and services. We must now return to a consideration of the flow of funds by means of which economic enterprise is carried out. It is evident that if the creation of new capital, as we have indicated, occurred chiefly when consumption was also expanding, there must somehow have been a simultaneous increase in the flow of funds through consumption and investment channels. How has this been made possible? 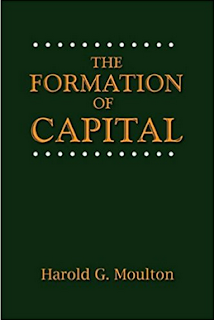 In Chapter II we presented a general picture of the financial institutions which are involved in the transfer of funds saved by individuals to business enterprisers interested in expanding productive plant and equipment. Among these institutions the commercial bank was mentioned as playing some part in the accumulation of savings deposits which were rendered available for long‑term investment. Besides acting as an intermediary institution in the transfer of funds from savers to capitalistic enterprisers, the commercial banks, taken as a system, create or manufacture great quantities of funds which are rendered available, like any other money, for the manifold requirements of business enterprise. As we shall hope to show, these institutions have played a role of fundamental significance in connection with the formation of productive capital. It is the commercial banking system, in fact, which has enabled a pecuniarily organized society to escape, in considerable measure, from the dilemma which has been outlined in Chapter III.
We are here interested not in the role which commercial banks play in transferring funds but in their capacity to create credit instruments which are ordinarily the equivalent of money. In this respect they are a generating force, a sort of economic pulmotor [a device for forcing air into a person’s lungs to prevent asphyxiation — ed.].
In analyzing the significance of commercial banks in connection with capital formation it will be expedient to break the discussion into three parts. The present chapter will be devoted to an explanation of the process by which the commercial banking system manufactures credit in general; Chapter VII will show the purposes for which bank credit is extended; and Chapter VIII will indicate the way in which the commercial banking system has facilitated the production of new capital goods.
#30#
Posted by Michael D. Greaney at 6:00 AM