Again, surprising this close to the holidays, we have quite a number of news items, covering everything from Pope Francis, to nineteenth century science fiction writers living in San Francisco (i.e., Robert Duncan Milne), and even G.K. Chesterton and George Bernard Shaw.  AND there is an unsolicited review of Michael D. Greaney, CESJ’s Director of Research, that describes him as “brilliant.”  Rather than keep you in suspense, then:


• Pope Francis’s Management Style.  Whatever your views on him (if any), it is clear that Pope Francis has a significant problem with his bureaucracy, the “Curia,” as it is called.  On the one hand, it’s about what you might expect in a 2,000-year old bureaucracy under a new CEO from outside the home office, and who is probably resented by a large number of functionaries who thought they should have gotten the job.  On the other hand, the Catholic Church is a religion, and has certain fundamental principles that differ substantially from an otherwise similar institution in civil society, and in today’s world (as in all other times and places) is often at odds with the surrounding culture.  From a Just Third Way perspective, Pope Francis needs “Justice-Based Management.”  A religion isn’t a business (or shouldn’t be), but there are certain universal principles that apply to every organization.
• Just Third Way Hour.  Your host Dave Hamill has put up another new podcast.   You can access it by clicking on this link and then on the tab “Related Tracks” (there is probably a way to get around this two-step process, but we haven’t figured it out yet).  Podcast No. 9 features interviews with Adofo Minka and Neil Shulman.
• We’ve been getting some good feedback about the podcasts.  Here are one listener’s unedited comments on Podcast #6 - Interview #2 with Mike Greaney on StartUps and Rents: “Mike Greaney is brilliant. Brian Vosper has guts. He goes out on a limb, joining CESJ as an intern and doing podcasts. It seems to me that Brian has a sense that the CESJ's ideas are based on reality, and are reasonable. CESJ's answer to the question, ‘What's wrong with the world,’ is (it seems to me) that the law written on every human heart has been disregarded; a critical element of that law, which can be accurately referred to as the natural law because it is based on the nature of human beings, is justice. Often forgotten in discussions of economic policy is the question of whether people have an equal opportunity to produce marketable goods and services and are being compensated based on what they have produced with their labor and their assets. — Bill.”  No, we don’t know who “Bill” is, or even if last name, only that he lives somewhere in Florida.
• The new tax plan is both too little, and too much.  Too little to raise sufficient revenue to run the government and cover all the spending, forcing yet another massive increase in debt, and too much in the way of complications and “social engineering.”  What is needed is a new “philosophy” of taxation.  For starters, people might want to look at an article from 1977  by Dr. Norman G. Kurland published in The Tax Executive, “Beyond ESOP: Steps Toward Tax Justice.”
• While the politicos are fiddling with the tax system to try and stimulate economic growth, Federal Reserve officials are twiddling with the currency to try and put a damper on economic growth.  It doesn’t strike anyone as odd that the income tax and the Federal Reserve were established at the same time as part of an overall fiscal and monetary reform and intended to reinforce each other.  The income tax would raise money to run government, while the Federal Reserve would supply the short-term (90 days in most cases) liquidity needs of the private sector, oversee clearinghouse operations, and replace the existing inelastic reserve currency (National Bank Notes, Treasury Notes of 1890, and United States Notes) backed exclusively by government debt, with a new elastic reserve currency, the Federal Reserve Note, backed exclusively with private sector hard assets.  What happened to derail these reforms will be described in a projected sequel to Red Star Over Bethlehem.
• Red Star Over Bethlehem. Those who have reviewed the text to date have uniformly expressed enthusiasm over the exhaustive study of what happened to social justice and where many of the odd ideas that afflict modern society — civil and domestic, as well as religious — came from and why they gained so much credibility.  Although the book has a “religious” title, and it talks a lot about religious concepts, it will easily be seen that it is not really about religion at all, but about the human person’s proper place in the social order. 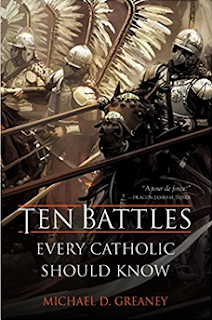 • Ten Battles Every Catholic Should Know.  Speaking of books, here’s an upcoming one from TAN Books, an imprint of Saint Benedict Press, by CESJ’s Director of Research that does have a religious theme . . . at least in part.  Ten Battles Every Catholic Should Know is currently available for pre-order, for delivery in mid-January.  It’s available now for pre-order from Amazon and Barnes and Noble.  According to Amazon (and Barnes and Noble may have the same deal), if the price goes down before the official release, the savings will be passed on to the customer.  We have it on the best authority that the author is already hard at work on an outline for an entire series on the development of western civilization during a period often neglected by historians: the fourth through the ninth centuries, covering (broadly) Constantine to Charlemagne, and the transformation of Europe from the classical Western Roman Empire, to the Holy Roman Empire.  Don’t worry — there is plenty of Just Third Way material that naturally works its way into the text.  (And if you thought you knew All About Attila the Hun . . . you probably didn’t!)
• Central Bank Theory.  We had yet another breakthrough in our understanding of central banking.  Carefully re-reading the original Federal Reserve Act of 1913, we discovered that the central bank was never intended to deal with mortgage-type securities, either through the discount window or open market operations.  This explains at least in part the massive confusion over the role of a central bank these days, because Keynesian monetary theory only recognizes mortgage-type securities!  Current Federal Reserve policy is analogous to trying to drive in a nail with a screwdriver, or a screw with a hammer.  You might succeed within limits of fastening things together, but it either won’t last, or will damage or destroy the very thing you’re trying to preserve.
• Just for Fun.  We’ve been trying to locate a new free newspaper archive service, and finally figured out to work the one at the Library of Congress, at least up to a point.  Just to test it, we looked for news stories dealing with G.K. Chesterton . . . and found a cartoon-illustrated article from 1912, and a long-lost photograph of the famous 1927 debate between Chesterton and George Bernard Shaw!  Nobody even knew this photo existed . . . until now.  (We also found the obituary and the only known depiction of Robert Duncan Milne, an early science fiction writer in San Francisco in the latter part of the nineteenth century.)
• Shop online and support CESJ’s work! Did you know that by making your purchases through the Amazon Smile program, Amazon will make a contribution to CESJ? Here’s how: First, go to https://smile.amazon.com/.  Next, sign in to your Amazon account.  (If you don’t have an account with Amazon, you can create one by clicking on the tiny little link below the “Sign in using our secure server” button.)  Once you have signed into your account, you need to select CESJ as your charity — and you have to be careful to do it exactly this way: in the space provided for “Or select your own charitable organization” type “Center for Economic and Social Justice Arlington.”  If you type anything else, you will either get no results or more than you want to sift through.  Once you’ve typed (or copied and pasted) “Center for Economic and Social Justice Arlington” into the space provided, hit “Select” — and you will be taken to the Amazon shopping site, all ready to go.
• Blog Readership.  We have had visitors from 30 different countries and 43 states and provinces in the United States and Canada to this blog over the past week. Most visitors are from the United States, India, the United Kingdom, Canada, and Peru.  The most popular postings this past week in descending order were, “It’s All About the Human Person,” “News from the Network, Vol. 10, No. 50,” “The Role of Bank Reserves, I,” “How Banks REALLY Create Money,” and “Thomas Hobbes on Private Property.”
Those are the happenings for this week, at least those that we know about.  If you have an accomplishment that you think should be listed, send us a note about it at mgreaney [at] cesj [dot] org, and we’ll see that it gets into the next “issue.”  If you have a short (250-400 word) comment on a specific posting, please enter your comments in the blog — do not send them to us to post for you.  All comments are moderated, so we’ll see it before it goes up.
#30#
Posted by Michael D. Greaney at 10:34 AM