II. The Problem (and Solution) of Social Justice 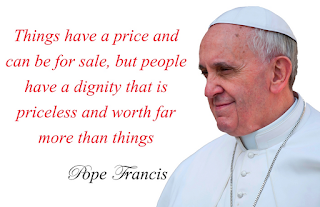 Realizing that there is a social problem and identifying it correctly is more than half the battle.  The other half of the battle to resolve social problems is to develop solutions that bring institutions back into material conformity with their particular missions and at the same time respect the demands of human dignity.
That, however, presents an additional problem today.  Far too many key institutions, such as the State, organized religion, Academia, money and credit, and a host of others, have become almost completely disconnected from the traditional understanding of human dignity: respect for the individual sovereignty and natural rights of every human person, especially life, liberty, and private property.
Instead, as noted yesterday, the collective — most often in the institution of the Nation State — has in many cases displaced both God and the human person, the former as the object of religion, the latter as the object of the social order.  This is in spite of the fact that the collective, any organized religion, the social order, or any other institution is not an end in itself.
All institutions ultimately exist only for the human person, and are legitimate only so long as they embody respect for individual human dignity.  Losing sight of that absolute principle almost inevitably means that institutions, regardless how venerable, important, or powerful they may be, will lose their way.
Another paradox thereby presents itself.  Without essential institutions to support human dignity, respect for human dignity decays.  At the same time, without an understanding of essential human dignity to provide a sound guide for structuring institutions, these “social habits” degenerate.
Fortunately, the situation is not hopeless.  In social justice, nothing is impossible.  As Father William J. Ferree, S.M., Ph.D., an expert in the social doctrine of Pope Pius XI, noted,
Another characteristic of Social Justice, . . . is that in Social Justice there is never any such thing as helplessness.  No problem is ever too big or too complex, no field is ever too vast, for the methods of this Social Justice.  Problems that were agonizing in the past and were simply dodged, even by serious and virtuous people, can now be solved with ease by any school child. (Rev. William Ferree, S.M., Introduction to Social Justice.  New York: Paulist Press, 1948, 47.)
Thus,
The completed doctrine of Social Justice places in our hands instruments of such power as to be inconceivable to former generations.
But let us be clear about what is new and what is old. None of the elements of this theory are new. Institutions, and institutional action, the idea of the Common Good, the relationship of individual to Common Good — all these things are as old as the human race itself. There is nothing more new in those things than in the school boy’s discovery that what he has been speaking is prose; nor must we ever believe that God made man a two-legged creature, and then waited for Aristotle to make him rational. Moreover, much of the actual application of these principles to practical life is to be found in older writers under the heading “political prudence.” (Ibid., 56.)
#30#
Posted by Michael D. Greaney at 6:00 AM