How to Stimulate Economic Growth


Yesterday we noted that fiddling with the tax system does not really affect the aggregate rate of economic growth.  Assuming that the government is not emitting bills of credit and inflating the currency and that private opportunists also are not printing their own money, the amount of spending in the economy will remain the same, regardless of the tax rate, even if the tax rate is 100%. 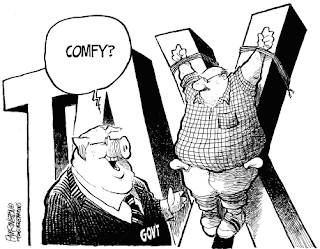 Why?  Because consumer demand is what drives the economy.  If there is $1 million earned in an economy in a year, and the government taxes and spends $100,000, and the citizens spend the rest, how much spending has there been in that economy in that year?  $1 million.  If the government taxes $250,000 and the citizens spend the rest, how much spending has there been?  $1 million.
Do you see where this is going?  Or should we take it to its reductio ad absurdum: $1 million earned, the government taxes $1 million . . . how much is spent?  $1 million . . . probably primarily in welfare to take care of all the people whose income got taxed away. . . .
So, consistent with the analysis in Dr. Harold G. Moulton’s 1935 classic The Formation of Capital and its refutation of the Keynesian New Deal, consumer demand drives the economy.  It must, however, be direct demand that derives from production in which the consumer has a private property stake, not simply the power a government might have to palm debt-backed currency off on the economy.

There was a problem with Moulton’s analysis, however.  He was spot on about money and credit, the role of supply and demand, the need for consumers to produce and for producers to consume . . . but he left out widespread ownership of capital as the chief means to gain consumption income in an economy in which technology is advancing, displacing labor from production.
Moulton admitted this was a problem, but he didn’t know how to solve it.  In Income and Economic Progress, he cautiously suggested a few things, such as profit sharing, that mimic ownership, but for some reason assumed that widespread ownership required redistribution of existing capital, already owned by others, which he could not condone.
No, as Louis Kelso and Mortimer Adler explained in their two collaborations, The Capitalist Manifesto (1958) and The New Capitalists (1961), it is not only possible to finance broadly owned new capital — not redistributed old capital — in the manner Moulton described in The Formation of Capital, it is essential, for two very good reason:
·      One, as technology advances, everybody must become a capital owner for the simple reason that Say’s Law of Markets requires that all producers be consumers, and all consumers producers in order to function.  With technology taking over the bulk of production, the only way to be sufficiently productive in the future will be to own the technology that is doing the producing.
·      Two, as Moulton acknowledged, new money that is created must be backed by privately owned existing or future wealth.  If Say’s Law is to function, the government must not issue one cent of new money backed with its own debt, or it has interfered with private property and the sanctity of contract.
The problem becomes how this can be done.  Instead of looking at all the failed alternatives, though, we’ll cut to the chase and just let you in on the secret.
It is possible for every child, woman, and man in the United States (okay, in the entire world) to become a capital owner without taking ownership of anything away from anybody else.  Ironically, Moulton himself showed how this could be done: by turning the future savings into money now to finance new capital formation to be broadly owned.  This is what commercial and central banks were invented to do.
The process is simple in essence.  Someone with a capital project proposal that is judged viable has something of value: a profitable idea.  The “borrower” can draw up a contract called a “bill of exchange” promising to redeem the bill for, say, $100,000, when the capital project is formed and becomes productive.
The borrower takes the bill to a commercial bank, and the bank “purchases” (accepts) the note at a discount by issuing a promissory note at less than the face value of the bill, to be repaid at the full face value of the bill at some future date or occurrence.  The bank’s promissory note is used to create a new demand deposit for the borrower, who takes the money and purchases what is needed to finance the new capital.
When the project becomes profitable, the borrower redeems his bill by paying off the promissory note, cancelling the money, thereby preventing inflation.  The bank’s revenue, which has to be enough to cover its expenses, risk premium, and a fair profit, consists of the difference between what the borrower received from the bank, and the amount repaid.
Now, about that “risk premium.”  All commercial loans are considered risky.  The risk premium is a determination (okay, an educated guess) as to the chances of that loan not being paid back.  If the bank guesses correctly and makes enough loans, everything evens out.
Even so, all loans must be collateralized in some way.  Just because statistically some loans go bad doesn’t mean it’s right for a particular borrower to default on repayment.
The problem is that traditionally all collateral consists of existing wealth . . . which is by definition a virtual monopoly of the already wealthy.  Kelso, however, had a solution.  If collateral ensures the lender against default, why not use “real” insurance, and use the risk premium as an actual insurance premium instead of a rather tenuous form of self-insurance?
The policy would pay off in the event of a default, making the arrangement not only less risky than traditional collateral (banks want their money back, not some collateral they have to dispose of at a fraction of its value), but open to use by the non-wealthy.  After all, it is much easier to pay a small risk premium than to accumulate the wealth for traditional collateral.
In this way, everyone could become an owner without redistribution.
#30#
Posted by Michael D. Greaney at 6:00 AM