How to Redeem the Non-Owning Worker


Yesterday we looked at a few of the papal statements underscoring the importance of widespread private property in capital.  As thinkers through the ages have noted, people are either owners, or they are owned — one way or another . . . and the worst way to be owned (not that there is any good way) is to be owned indirectly by having the system or those who control the system keep people in a permanent condition of dependency.
And what is the best way to keep people utterly dependent on the State or a private sector élite?  Keep them propertyless.  This, as Leo XIII noted, imposes a yoke little better than that of slavery on the non-owning worker and the worker’s dependents.  If nothing else, the (Servile) State gets all the advantages of slavery without the odium of sanctioning it, while the non-owning worker lacks even the security slavery presumably provides, which is probably one reason Aristotle called propertyless workers "masterless slaves."
The real importance of private property, however, is both individual and social.  Individually, private property is the inherent right every child, woman, and man has to become an owner.  Socially, private property is a set of rights and duties that define how an owner, other people, and the thing owned relate to each other.  Private property thereby gives the owner a “social identity,” so to speak, vesting him or her with both personality and the means to maintain and exercise one’s life within the social unit, the pólis.
Human beings being by nature “political animals,” ordinarily acquiring and developing individual virtue within a social context, private property is thus the primary means by which people become more fully human, conforming themselves to their own nature.  From a religious perspective, then, the income aspects of capital ownership (while not negligible) take a back seat to the “power” aspects of capital ownership, vesting owners with the means to secure life and liberty, and grow in virtue (“pursue happiness”).
If the income aspect of private property were the only reason for advocating widespread capital ownership, then the socialists and many capitalists would be absolutely correct: ownership really is onerous.  Managing property is hard work, and it can be risky — very risky.  No one is going to guarantee that an owner will get the income he or she needs or wants.  With respect to income security, the wage and welfare system has the private property system beat all hollow.
In theory, anyway.  Of course, there is the problem of treating adults like children, and the fact that the level of redistribution required by the wage system, whether directly through the tax system, or indirectly through government-induced inflation and minimum wage legislation, virtually ensures that eventually there won’t be enough to redistribute.
But income security is not the main reason for expanded capital ownership.  Paradoxically, of course, it ends up being the best way to ensure an adequate and secure income.
That, however, is just an added benefit, especially for those who tend to think only in materialist terms.  Both socialists and capitalists tend to ignore the fact that the purpose of life is to become more fully human, which people do by acquiring and developing virtue, not by having every need taken care of.
So we’ve settled that, just as Aristotle noted, capital ownership is essential for leading a life of virtue, “the good life.”  The only question remaining is, How?
Despite papal suggestions regarding paying workers more so they can save to purchase capital, it’s virtually impossible to do so, except after nearly a lifetime of scrimping and saving and practicing heroic economic virtue, i.e., being a miser.  The Catholic Church’s take on that is that people should focus on practicing heroic human virtue, developing prudence, fortitude, temperance, and justice, and then completing and fulfilling these human virtues with faith, hope, and charity.  And you’re not likely to have the time to be virtuous if all you do is struggle to make enough income.
This is not a slam at papal teachings.  Any reasonable person reading the encyclicals should be able to realize that the popes are only giving suggestions when they say something specific, e.g., pay workers enough so they can save to buy a bit of land.  What if a worker inherits money?  Is he or she allowed to use that money to buy land?  And what if there is no land for sale?  Can he or she buy an annuity, a small shop, or high dividend-paying equity shares in a sound and well-managed company?
One almost see the look of stunned amazement on the face of, say, Leo XIII if he heard how some people have interpreted Rerum Novarum as mandating wages as the sole legitimate source of income or for financing capital formation, or claiming that the encyclical applies only to land, not any other forms of capital.  Those claims are clearly refuted in the encyclical itself, yet we have heard people, presumably experts, make those and similar statements, and some even more bizarre.
No, if there are better ways to finance capital formation than past savings, and if there are other forms of capital available besides or in addition to land, no reasonable person should raise any objection.  On the contrary, since the past savings assumption is what keeps most people from becoming capital owners, any pope, and any other person with common sense, would immediately jump on it.
That is why the ideas of Louis Kelso and the work of the Center for Economic and Social Justice (CESJ) are so important.  As applied in the proposal for a “Capital Homestead Act,” they are a way for every child, woman, and man to own capital without putting up a cent of past savings or reducing current income. 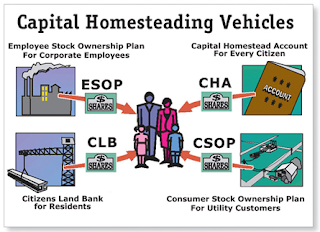 The basic principle is simple:
·      Locate a financially feasible capital project.  “Financially feasible” means one that pays for itself within a reasonable period of time out of its own future profits.
·      Go to a commercial bank, present the project to a loan officer, and the bank can create money backed by the capital project with which to purchase the project (in other words, buy now, and let the capital pay for itself later).
·      Collateralize the loan with insurance, using the risk premium typically added to the cost of the loan as an actual insurance premium on a policy that pays off if the new capital does not pay for itself.
·      Put the capital into production, repaying the loan, and afterwards using the income for consumption.
·      Repeat, until every child, woman, and man has reached a level of “capital self-sufficiency,” i.e., owns enough capital to generate an adequate and secure income.
Those are the bare bones.  There are, of course, a number of details, many of them important, but that’s essentially how the process would work.  Nor is it all that innovative.  The rich have been using their money creation powers to get rich(er) for centuries, while forms of insurance have been used to spread out and minimize risk as long as civilization has existed.
For example, four thousand years ago Chinese merchants would mingle cargos to avoid one person losing everything if a vessel went down.  Two thousand years ago the merchants of Rhodes paid a fee to reimburse those whose goods were jettisoned during a voyage.
The difference is that Capital Homesteading would allow ordinary people to use the same techniques the rich have always used.  Everybody in society benefits, not just a wealthy or politically powerful élite, and the good life — the life of virtue — becomes open to all.
#30#
Posted by Michael D. Greaney at 6:00 AM