Socialist Delusions, Capitalist Illusions, VI: Where Does the Money Come From?

Last week we decided that having private property in capital is absolutely essential if someone is to have the power to exercise his or her rights, thereby becoming more fully human.  This is because (as Daniel Webster reminded us nearly two centuries ago), “Power naturally and necessarily follows property.”  You need power — the ability for doing — to exercise rights, and thus private property to have power in order to make your rights effective.
The problem now is how are people without savings or large incomes (i.e., most of us) supposed to get capital?  Most people can’t afford to save, and if they do manage to cut demand for consumer goods, they also cut demand for new capital goods.  This, in turn, means that they won’t have any place to invest their money unless they go after existing capital, which drives up the price, lowers return, cuts demand, and gets into a vicious downward spiral.

That gloomy scenario, however, assumes that the only source of financing for new capital formation is existing accumulations of savings that resulted from reductions in consumption, or from transfers of wealth from one set of persons to another, either by direct redistribution through the tax system, or indirect redistribution by manipulating the currency.  There is, however, an alternative to this “slavery of savings.”
Consider this: if decreasing consumption in the past is harmful to the rate of new capital formation in the present, why not switch to increasing production in the future?  Is that even possible?
Yes.  Harold Moulton studied the situation in the 1930s in great detail, and compared it with other periods in U.S. history.  He discovered that periods of rapid economic growth did not follow periods in which consumption was reduced, but periods in which consumption increased!
In other words, if conventional wisdom was correct that you have to reduce consumption in order to save to have enough money to finance new capital, then periods of rapid economic growth had to follow periods in which consumption was reduced . . . but this was not the case.  In each and every period in which the country experienced rapid, almost explosive economic growth, it always followed a period during which consumption increased! 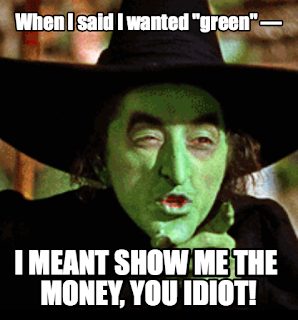 But . . . but . . . but . . . (that motor boat again) . . . where did the money come from?  Moulton answered that question as follows:
In order to make the problem of financing this capital expansion appear as difficult as possible, let us assume, for the moment, that the increasing flow of funds through consumption channels has been accompanied by a decreasing flow through savings channels. (We shall presently show, however, that this would not long continue.) Under these conditions would not the formation of new capital be rendered impossible? The answer is that even though the flow of funds from individual savings for investment purposes may, for the moment, be inadequate, it is still possible to procure liquid funds with which to buy essential materials and employ the necessary labor.
Funds with which to finance new capital formation may be procured from the expansion of commercial bank loans and investments. In fact, new flotations of securities are not uncommonly financed — for considerable periods of time, pending their absorption by ultimate investors — by means of an expansion of commercial bank credit.  (Moulton, The Formation of Capital, op. cit., 104.)
Many historians have ignored Moulton’s findings, contending that the financing for America’s rapid expansion came from Europe, principally England.  The problem is that there is no evidence of such massive transfers of cash from Europe.  While significant amounts of investment capital did come from Europe, it was nowhere near the amount needed to finance the incredible growth the United States experienced in the latter half of the nineteenth century.
The sudden demands to liquidate U.S. investments in the early 1890s as a result of the falling price of silver that triggered the Panic of 1893 and the Great Depression of 1893-1898 were disastrous only because European investors demanded their funds in American gold instead of mortgages, bills of exchange, silver, or the debt-backed and inelastic National Bank Note reserve currency.  This drained the commercial banks of gold reserves (essentially working capital for the financial sector), which meant that U.S. banks had to stop extending credit domestically for commerce, industry, and agriculture, or fail to meet reserve requirements.  This caused an almost instantaneous financial crash and depression until the banks could meet reserve requirements and begin lending again after the inflow of reserve gold from Europe in payment for wheat exports from the U.S. bumper crops of 1897 and 1898 that resulted from crop failure in Europe.  The gold that had flowed out five years before returned as suddenly as it had gone.
Something similar happened in the early 1930s.  When the stock market crashed in late 1929, the value of industrial, commercial, and agricultural capital plunged.  Since existing capital was used in many cases as collateral to secure loans from commercial banks, what in August 1929 was a rock solid business loan became by December 1929 a loan with insufficient collateral, which triggered a “call” of the loan.  Banks could not extend credit, and the country went into a depression.  The banks could only start lending again when businesses had a customer for what they could produce: the U.S. government, which needed all available goods and services to fight World War II.
Thus, when banks cannot create money by extending credit for sound and otherwise financially feasible capital projects, whether ongoing or to form new capital, industry, commerce, and agriculture dry up and the economy goes into a tailspin.  As Moulton realized from his analysis, existing wealth — savings — is not the primary source of financing for new capital formation or for working capital.  Rather, commercial banks create money by turning a part of the present value of future increases in production into money, and borrowers use this money, this “pure credit” (“pure” because it can be extended without regard to existing pools of savings), not existing savings, to finance new capital.
But don’t banks still have to have reserves and collateral to be able to expand credit and create money?  Don’t you still “need money to make money”?
Of course you do — and we’ll look at that tomorrow.