Yesterday we saw how commercial and central banks acting in concert as intended can create an elastic and asset-backed reserve currency to establish the foundation on which to finance sound industrial, commercial, and agricultural projects.  Not that they actually operate that way in many cases today; the role of the central bank has been completely perverted and hijacked to serve political ends in virtually every country that has a central bank.  And those that don’t?  They rely on the misuse of another country’s central bank, thereby indirectly helping to perpetuate an unjust system.


Nevertheless, what we described yesterday is how the banking system was originally intended to work, before the capitalists and the socialists between them screwed everything up.  We did leave one question unanswered, however.  That is the role that existing savings (or “past savings” if you prefer) can play in sound and productive money creation.
True, strictly speaking, existing savings are not essential to the process of money creation for productive projects.  You do need savings, of course, but they can be future savings: the present value of future increases in production that have been monetized and can thus be used to finance new capital formation.  You’re not necessarily trapped by past savings, that is, decreases in consumption in the past.
Still, any lender (a category that includes people and institutions that create money) wants to be reasonably certain that he, she, or it is going to get the money that was created back so it can be cancelled once it has done its job.  If the repayment doesn’t come out of profits that are made in the future, then it can only come out of past savings.  A prudent lender will always insist — and sometimes is required by law to insist — that a borrower have the ability to repay the money the lender created for him or her even (or especially) if the borrower’s capital project turns out to be a dud and doesn’t generate enough profits to repay the loan.
What can go wrong?  Plenty — even if every borrower has adequate collateral when the loan is made.  That is what we saw in the Great Depression of the 1930s as a result of the fall in stock market values. 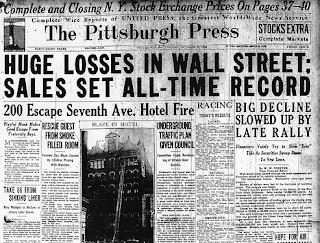 The Crash of 1929 didn’t actually cause the Great Depression — not directly, anyway.  If all that had happened was a drop in stock values on the speculative secondary market (a stock exchange is, frankly, just a secondhand shoppe for used debt and equity), the bad effects would have been both limited and localized.  A few speculators would have splattered themselves on the sidewalks of New York, a few companies would have gone bust when people realized they didn’t actually produce any marketable goods or services . . . but that is not all that happened.
Because of the stock market bubble, all assets were overvalued, even the sound ones.  By 1932 stocks had, on the average, lost 80% of the value they had in 1929, and this carried over to other assets in the economy.  A company that had been worth, say, $100,000 in August 1929 was worth $20,000 in August 1932.
Everything else being equal, what was the problem?  If all prices fall more or less equally, there isn’t one.  You’re making 20¢ an hour instead of $1.00, but everything costs 80% less, anyway, so what’s the difference?  Who cares how much a company or an asset is worth on paper if it generates enough in profits to pay the bills?
The problem was that the value of assets fell along with the stock market — but the contractual amount of business loans stayed the same.  A business obtained a revolving loan or line of credit of $100,000, and pledged the business itself, worth $200,000 in August 1929, as collateral or security for the line of credit, which the bank’s covenants required to be twice the value of the line of credit.  Rock solid . . . as long as the business was worth $200,000 and it could maintain its line of credit by making regular interest payments.
By August 1932, however, that $200,000 business was only worth $40,000 on paper . . . and a loan covenant or contract is a piece of paper that obligates both borrower and lender.  The contract forced the borrower to maintain collateral worth $200,000, and it was now only $40,000.  The bank was forced to call the loan, bankrupting the business.  The bank had no choice; it could lose its charter and be forced out of business itself if it failed to keep to the terms of the loan contract.
It seems like a lose-lose situation, and — bound by the slavery of past savings — that’s exactly what it was, and remains.  The terror the business community experiences every time the stock market takes a nosedive isn’t empathy for the Wall Street speculators.  It’s concern for its own collective hide.  When values fall, they can’t get credit, and credit is the life’s blood of the economy.
If it weren’t for that, if there was some viable substitute for traditional collateral, the real, primary market that actually produces marketable goods and services could afford to laugh its head off at the antics of people who think they’re doing something clever by conning people into speculation.  Frankly, a tout at the track is more honest: you know all the horses or dogs can’t lose; one of them has to win.
What to do?
Let’s take another look at Miss Olive Oyl.  What if Oyl doesn’t have collateral, that is, other wealth that she can use to pay off the loan just in case her capital project doesn’t make the money she expects to make?
Thinking about that for a bit, we realize that the wealth Oyl needs to “secure the loan” (i.e., make it safe for the bank to put its reputation and credit rating on the line for Oyl’s benefit) doesn’t have to be in the traditional form of collateral, i.e., existing wealth that Oyl owns.
Instead, Oyl can replace traditional collateral with capital credit insurance and reinsurance.  This does exactly the same thing as traditional collateral, only better and cheaper.  Oyl in a sense “rents” the insurance pool for a premium that can be relatively small because it’s based on the risk that her particular loan will go bad — which would be pretty low for something that the bank looks over with sufficient care (bankers tend to know their own business).


This is, in fact, how insurance has always worked.  Everyone knows that somebody, somewhere, is likely to lose something, e.g., out of a hundred ships that set sail for trading ventures in a year, five of them will be sunk, attacked by pirates, or something.  The overall risk of loss is therefore 5% for that year.
What the guys down at Lloyd’s Coffee House (a sort of seventeenth century Starbucks, but without internet) decided was that all the merchant ship owners could chip in 5% of the value of their vessels and cargos, and build up a pool.  For example, if the total value of the merchant shipping for that year for the gang was £100 million, they would have an insurance pool of £5 million after everyone paid his or her premiums.
If one guy’s ship made it back to port safely, his 5% insurance premium was counted as just another cost of business, and deducted from his revenues.  If, however, his ship was one of the unlucky ones captured by pirates, he got paid for the value of his vessel and cargo, and could start over again without going bankrupt.  His 5% insurance premium still counted as a cost of doing business and was deducted from his revenues, but instead of writing off the cost of his ship and cargo as a loss and checking into debtors’ prison, he paid his bills and bought another ship . . . and hopefully avoided pirates in the future.
Oyl can do the same thing.  If everybody who doesn’t have traditional collateral chips in the “risk premium” (i.e., the chance that their loans will go bad) and puts the money into a general pool, the money will be there to make good on any bad loans without either the bank or the borrower being forced into bankruptcy.
Had businesses been able to obtain capital credit insurance in the 1920s and 1930s, there would have been a short recession, possibly as long as two years, but no Great Depression.  The insurance industry would have taken a big hit, and possibly even have needed a government bailout (although that is far from certain), but the economy would have kept going.  Businesses would simply have refinanced — and had to pay insurance premiums calculated on the increased risk factor resulting from having defaulted.  This would have allowed the insurance companies to recoup their losses. 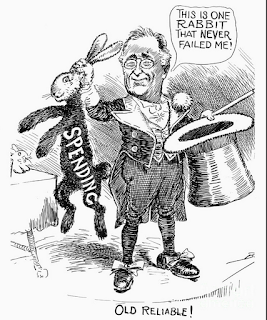 Failing that, the government could have offered emergency capital credit insurance on a short term basis to replace the fall in the value of traditional collateral.  With the value of their collateral supplemented, companies could have stayed in business, and private insurance could quickly have replaced the government program.
Instead, what the country got was the Keynesian New Deal (essentially warmed over socialism), a money supply backed by government debt instead of private sector assets, and a national debt of $19 trillion and rising.
Does this mean that capitalism is therefore better than socialism?  We’ll start looking at that tomorrow.