As we saw yesterday, America — the world — needs a “new frontier.”  Nor can it be a frontier restricted to an élite or a chosen few, but must be open to every human being who chooses to take advantage of the opportunity.

Nor can the frontier be limited to land, a finite resource, albeit renewable if taken care of.  No, the new frontier must consist of all forms of capital, anything by means of which people can earn what Turner called a “competence,” i.e., a reasonably secure income sufficient to meet a family’s needs.
This will amend Turner’s statement to “So long as the potential for self-liquidating productive capital exists, the opportunity for a competency exists, and economic power secures political power.” (Turner, “The Significance of the Frontier in American History,” op. cit., 223.)  The frontier need not be limited by the amount of land, but by the creative potential of the human person.
This is the basis of the “Capital Homesteading” concept proposed by the Center for Economic and Social Justice (CESJ).  Briefly, the Capital Homestead Act is a comprehensive legislative program of tax, monetary, and fiscal reforms to make every citizen a shareholder in the technological frontier.  It is designed to connect every child, woman, and man to the global economy as a fully empowered participant and owner of new technologies through private property, that is, direct ownership of all forms of productive capital.

This “Economic Agenda for the Twenty-first Century” provides an outline for leaders committed to restructuring the legal and financial system to grow the economy at maximum rates with no inflation.  This can be done in ways that build a Just Third Way version of economic democracy as the essential foundation for effective political democracy — just as Turner pointed out is essential.
Capital Homesteading for every citizen offers a private property, free market-oriented alternative for saving the Social Security System as a national retirement income security plan.  At the same time, the Capital Homestead Act offers a new national policy to foster life-long  “capital self-sufficiency” as a means to achieve true economic independence for all Americans.  If implemented, capital ownership would be systematically de-concentrated and made directly accessible to every person, without reducing property rights of the wealthy. 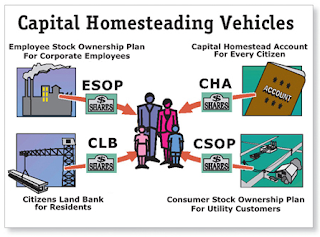 The idea is that every individual gets the right to purchase capital assets represented by newly issued shares of stock in financially sound corporations.  The full stream of income attributable to those shares is paid out to the new shareholder, who first uses the dividends to pay for the shares, then — after the shares are paid for — to meet his or her living expenses.
To encourage corporations to pay out all earnings to their owners (shareholders own the corporation, and are entitled to the income generated by what they own), dividends would be tax deductible to the corporation.  They would be treated as ordinary income by the shareholder, with a tax deferral if the dividends are used to make payments on the shares.
Corporations would finance growth not by retaining earnings, but by issuing new equity shares.  Of course, this raises the question of where the new shareholders are to get the money to pay for the shares — which is what we’ll look at tomorrow.
#30#
Posted by Michael D. Greaney at 6:00 AM