Despite the obvious fact that technology produces marketable goods and services better, less expensively, and in greater quantity than human labor ever could, some people continue to insist that human labor is the only “real” factor of production.  Nor is this delusion confined to socialists.  It doesn’t matter where you go, “productivity” is measured in terms of output per labor hour.
If, however, capital as well as labor is productive, and capital is displacing labor as the predominant factor of production, then we have a problem.  Most people don’t own enough capital to make a difference.

Plus, if we assume that the only way to obtain capital is to produce more than you consume and accumulate the excess in the form of money savings, or inherit, redistribute, or steal, we have another problem.  Not too many of us were smart enough to be born into an inheritance, and stealing — whether you call it redistribution, distributive justice, reparations, distributive charity, social justice, sticking it to the rich, God’s Will, or anything else — is just plain wrong . . . unless (of course) you are God and can make and break the rules (which, given the Judeo-Christian-Islamic concept of God means you aren’t God, cf. “The LORD hath sworn, and will not repent,” i.e., He doesn’t change his mind and break His own rules).
So, if you aren’t already rich and thus have the capacity to save without depriving yourself, and you refuse to play God and just take from others (or get others, such as the State, to do it for you so that you don’t sully your own hands), how, exactly, are you supposed to obtain the capital to supplement, even replace what you can produce by means of your labor?
This was the problem Louis O. Kelso and Mortimer J. Adler addressed in their second collaboration, The New Capitalists (1961).  We’ll get into why the title is so lousy when we look at the illusions of capitalism after we’ve finished the delusions of socialism, but for now the subtitle of this rather short book is the important thing: “A Proposal to Free Economic Growth from the Slavery of Savings.”
Does this mean we’re agin’ saving?  No.  Saving is essential if we’re trying to finance new capital formation, or have something put by for a rainy day, as prudence would dictate.
What we’re agin’ is the wrong use of savings.  Different kinds of savings are used — or should be used — in different ways.  If we use a type of savings meant for one purpose for another purpose entirely, and don’t allow the use of the right kind of savings for the job, we are letting savings use us, rather than us using savings; saving has stopped being our servant, and has become our master. 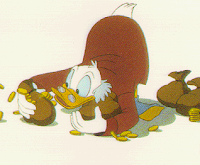 Misers, who save as an end in itself, have a mild case of “savings slavery.”  Why mild?  Because, assuming that the miser isn’t cheating anyone or stealing, he or she is only hurting him- or herself and the limited number of people who would be benefitted by the increase in consumer demand resulting from the miser spending his or her hoard instead of saving.
The real problem with savings slavery is when an entire economy suffers from the disease.  If everyone saves enough income to finance new capital, then there won’t be enough consumer demand in the economy to justify financing the new capital!
This is the “economic dilemma” that socialism tries to resolve by overriding human rights in the name of humanity.  Here’s how Dr. Harold G. Moulton described the dilemma:
Let us next assume that, instead of an increase in the percentage of national income that is spent, there is an increase in the percentage that is saved. Let us assume that only 60 percent is spent, while 40 percent is set aside for the purpose of investment. As is indicated in the third diagram, the resulting decrease in the demand for consumption goods would lead to the discharge of workers engaged in the production of such goods and increase the amount of idle plant and equipment. Under these circumstances the opportunity for profit in expanding plant and equipment would be diminished and the effective demand for new capital construction would accordingly decline. Hence we have reduced the "Additions to Capital" area and raised the question — What becomes of the excess money savings?
It will be observed from these illustrations that when the flow of funds through consumption channels is increased there arises a demand, from consumers, for the construction of additional capital goods; but that, at the same time, funds with which to create the additional capital become less available. Contrariwise, it will be seen that when the flow of funds through consumption channels is reduced an increased supply of money for capital expansion is rendered available; but that the business incentive to use it for such purpose is diminished.  (Harold G. Moulton, The Formation of Capital.  Washington, DC: The Brookings Institution, 1935, 32-33.)
This puts us in a bit of a quandary.  If even the richest people save enough to finance new capital formation instead of spending their income, consumer demand drops to the point where there is no point in investing the savings. 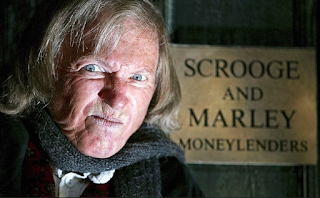 The case is even worse for the poor.  If someone who is making exactly enough on which to survive (instead of using consumer credit to buy now and pay later, mortgaging future wage or welfare income), decides to start saving 10% of his or her income, there is an immediate drop in the standard of living with no commensurate benefit: there is no way saving 10%, or any percent of one’s subsistence income is going to enable anyone to purchase enough capital to make up for the loss of consumption power caused by saving current income.  Advanced capital instruments are just a trifle too expensive for most people to be able to afford even with a lifetime of scrimping and saving that would put Ebenezer Scrooge to shame.
So, what is to be done?  We’ll answer that question on Monday, which gives you something to look forward to over the weekend instead of wasting your time with the Super Bowl.