Oh, look!  The world is ending (again).  As of this writing, the Dow is down over 250.  Not to worry, though.  As we’ve pointed out on this blog many, many times, the stock market is meaningless and has little if anything to do with the genuine, productive sector of the economy.  So why keep mentioning it?  Because in contrast (or even without any comparison) binary economics and the Just Third Way represent the only sane alternative.


So here’s what we’ve been doing to restore sanity to the world:

• We’re all getting set for the World Meeting of Families in Philadelphia next week.  A rather large number of glitches cropped up (one of which we’re dealing with now even as this is being typed — and it might work out, after all, but not by much . . . latest word is not. . . .), but everything has been handled within marginally acceptable parameters of satisfaction . . . more or less.  Some unexpected possibilities for contacts have opened up (one being with a prominent Catholic media company), and things have moved forward. 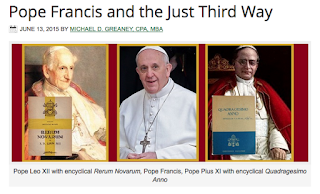 • We are still working out the details needed to launch a major fundraising drive for CESJ to get the resources to translate a number of significant articles (e.g., “Pope Francis and the Just Third Way”) and other material that present concepts that are key to solving the increasing number of crises in the world.  This will be geared toward obtaining grants from foundations, and not from the general public, at least at this stage, and not for at least a year and a half.  This may be launched before the end of our fiscal year on September 30, and we could be seeing results as early as January of 2016.  Of particular interest will be CESJ co-founder William J. Ferree’s key pamphlet Introduction to Social Justice (1948), and the Just Third Way Edition of Fulton Sheen’s Freedom Under God (1940).  We’re starting small, though, to test the waters, so to speak, and are looking initially at more translations of “Pope Francis and the Just Third Way” and the paper on the Greek debt crisis currently being edited by an official with the National Bank of Poland, scheduled for publication this month.  Joe Recinos is preparing a list of materials he would find useful in educating people about the Just Third Way if translated into Spanish.

• The article based on the blog postings on the Greek debt crisis is nearing completion and should soon be published in the official journal of the Polish National Bank, the Financial Observer.  This is significant, because the Polish National Bank is one of the more sanely run institutions in the world.  Their motto is, “We Protect the Value of Money.”

• A member of the CESJ core group expects to be at the University of Notre Dame the first four days in October.  It may be possible to arrange for some meetings with key people while there.

• As of this morning, we have had visitors from 48 different countries and 53 states and provinces in the United States and Canada to this blog over the past two months. Most visitors are from the United States, Canada, the United Kingdom, India, and the Philippines. The most popular postings this past week were “Halloween Horror Special XIII: Mean Green Mother from Outer Space,” “The Purpose of Production,” “Thomas Hobbes on Private Property,” “Aristotle on Private Property,” and “How to Cause (and Cure) a Great Depression.”