As of this writing, the stock market is waiting with bated breath for the latest decision of the Federal Reserve over interest rates.  It doesn’t matter a hill of beans, though.  No significant amount of credit is being channeled to the primary productive market, and none at all to making ordinary people productive through capital ownership.  Instead, it’s all going to bolster stock prices which bear less and less resemblance to reality every day.


Back in the real world: 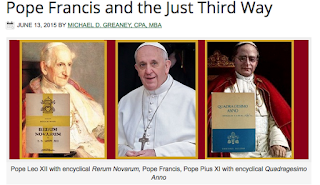 • We are still working out the details needed to launch a major fundraising drive for CESJ to get the resources to translate a number of significant articles (e.g., “Pope Francis and the Just Third Way”) and other material that present concepts that are key to solving the increasing number of crises in the world.  This will be geared toward obtaining grants from foundations, and not from the general public, at least at this stage, and not for at least a year and a half.  This may be launched before the end of our fiscal year on September 30, and we could be seeing results as early as January of 2016.  Of particular interest will be CESJ co-founder William J. Ferree’s key pamphlet Introduction to Social Justice (1948), and the Just Third Way Edition of Fulton Sheen’s Freedom Under God (1940).  We’re starting small, though, to test the waters, so to speak, and are looking initially at more translations of “Pope Francis and the Just Third Way” and the paper on the Greek debt crisis currently being edited by an official with the National Bank of Poland, scheduled for publication this month.  We’ve also asked Joe Recinos for a list of materials he would find useful in educating people about the Just Third Way if translated into Spanish.

• CESJ’s definition of social justice will be used in an upcoming textbook to be published in 2017 by Jones & Bartlett Learning, an affiliate of Ascend Learning Company, and with permission to include the definition in other works — at no cost, of course (CESJ does not charge others for promoting CESJ’s materials — as long as they know about it and are notified in advance).  This is not the first time CESJ’s definition of social justice has been used in a text, so it must be getting around in academic circles to some degree: “A virtue that guides us in creating those organized human interactions we call institutions.  In turn, social institutions, when justly organized, provide us with access to what is good for the person, both individually and in our associations with others.  Social justice also imposes on each of us a personal responsibility to work with others to design and continually perfect our institutions as tools for personal and social development.”  For a more in-depth treatment of social justice, download a free copy of Introduction to Social Justice by CESJ co-founder, Father William J. Ferree.

• We are developing a special advertising bookmark to take to the World Meeting of Families.  One side will have a description of Freedom Under God with ordering information for individual and bulk sales, and the other will have Capital Homesteading for Every Citizen, again with ordering information.  We will be distributing the bookmarks and other free materials instead of selling anything due to the complicated requirements for obtaining a “transient vendor’s license” in the Commonwealth of Pennsylvania; we thought that filling out 28 pages of forms was not a good use of our time.  As an added benefit, anyone who wants to order bookmarks in bulk for their own marketing efforts can let us know, and we’ll order some for you.  There’s a minimum 25 per order . . . which costs around 75¢ per bookmark, so we’re ordering 2,000 for ourselves which brings the price down to about 5¢ each.  If you would like to promote other CESJ publications using bookmarks, let us know which one(s), and we can come up with a design for a small charge.  Send any enquiries to publications [at] cesj [dot] org.  (We’ll also do the same for books published by Universal Values Media, Inc., as long as you don’t combine books from the two publishers on the same bookmark.)

• As of this morning, we have had visitors from 49 different countries and 52 states and provinces in the United States and Canada to this blog over the past two months. Most visitors are from the United States, Canada, the United Kingdom, Australia, and India. The most popular postings this past week were “Halloween Horror Special XIII: Mean Green Mother from Outer Space,” “Thomas Hobbes on Private Property,” “The Purpose of Production,” “Flexible Standards, II: Making Money,” and “How to Cause (and Cure) a Great Depression.”