It’s hardly news that “conservatives” have a problem with Pope Francis.  As a rule, they tend to think that he has gone “too far.”  It’s also no secret that “liberals” have a problem with Francis.  As a rule, they think he hasn’t gone far enough.  What neither side has considered is the possibility that Francis hasn’t actually gone anywhere at all, at least, not in any substantive way. 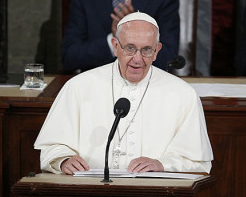 This is easily explained.  Surprising as it may be to many people, the pope has no power to change or invent new doctrine.  In fact, it comes as a shock to many people to learn that the pope isn’t infallible.

That’s right, the pope is not infallible.  It’s the pope’s teaching office that is infallible, not the pope himself.

This was made clear when “papal infallibility” was defined during the First Vatican Council.  Cardinal Gibbons and others pointed out that the title of the document, “On Papal Infallibility,” could give people the impression that the pope himself is infallible, and could create or destroy truth at will.  The Council Fathers agreed, and changed the title of the document to “On the Infallibility of the Teaching Office of the Pope.”

Any infallible declaration by any pope is, therefore, to be understood as a matter of course as completely consistent with all other infallible declarations by all other popes — all 265 (266 with Francis) of them.  If you (as a Catholic) think it is not consistent, then you are misunderstanding it (non-Catholics are expected to use their common sense and assume that no contradiction is intended, and they might be misunderstanding it).  As for non-infallible statements . . . the pope is human, and therefore as prone to make mistakes as anyone else.

For example, suppose someone asks the pope, “What’s the weather look like today, Your Holiness?”  The pope, having stayed up late and caught the news recalls the forecast was warm and sunny.  He replies, “Oh, it’s going to be a fine day.  You might want to take the wife and kids on a picnic.”

Unfortunately, a cold front moved in, and what you get is heavy thunderstorms and a frog-strangling downpour.  The wife and kids are soaked, the lunch ruined, and you catch a cold.  Do you quit the Church declaring that the pope lied to you and papal infallibility is a myth, or do you admit that the pope might not be an expert on the weather or was poorly advised by the Roman weather girl?  Hint: opt for the latter.

Yes, the pope can be poorly advised on matters outside his competence, or on which he is giving a personal opinion on matters concerning which he has not been adequately briefed.  Even on matters on which he speaks as an expert and infallibly, infallibility only covers the pope’s teaching office — it doesn’t have anything to do with your learning capacity or what you prefer to hear.  He may teach infallibly, but you learn (and hear) very fallibly.

So, while a number of people might raise an eyebrow or two at Pope Francis’s mentioning Dorothy Day and Thomas Merton, don’t make too big a thing of it — in either direction.  He was not holding them up as perfect exemplars in all things, but for selected characteristics.

Day?  “Her social activism, her passion for justice and for the cause of the oppressed, were inspired by the Gospel, her faith, and the example of the saints.”  Why, yes, this is perfectly true.  Note, however, that Pope Francis did not say Day’s understanding of justice was accurate or complete, that social activism is always the right way to go about effecting social change (according to Father Ferree, by itself social activism without acts of social justice — activism per se is not an act of social justice, but can lead to them if used properly — rarely accomplishes anything substantive), or anything else.

Nor was Francis anticipating any decree of canonization for Day.  This is in spite of the fact that a number of people in the Catholic Worker movement have already started calling her “Saint Dorothy.”  They forget that anticipating anything in the Catholic Church in that manner has always resulted in serious disappointment . . . can you say “Henry VIII’s divorce”?  Paul VI and contraception?  Upcoming Synod on the Family?  Don’t hold your breath if you anticipate a doctrinal decree of some kind, especially in your favor or in support of what you want.  You might have a slightly interested motive. . . .

Frankly, even with Day’s concern for the poor it would be prudent to keep in mind what Pope St. John Paul II said in reference to those who insist that concern for the poor is the only thing that matters, a comment that may have been intentionally directed to Day and the Catholic Worker movement:

“As I have already noted, love for the poor must be preferential, but not exclusive. The Synod Fathers observed that it was in part because of an approach to the pastoral care of the poor marked by a certain exclusiveness that the pastoral care for the leading sectors of society has been neglected and many people have thus been estranged from the Church.  The damage done by the spread of secularism in these sectors — political or economic, union-related, military, social or cultural — shows how urgent it is that they be evangelized, with the encouragement and guidance of the Church's Pastors, who are called by God to care for everyone. They will be able to count on the help of those who — fortunately still numerous — have remained faithful to Christian values.”  (Ecclesia in America, § 67.)

It cannot be denied that much of Day’s rhetoric, particularly when she praised communism and communists, could strike many people as smacking more of hatred of the rich than love of the poor.  Rich people who know they are not the consummate and heartless villains Day and others portrayed have been alienated from the Catholic Church — why, after all, stick around when all you get is abuse and accusations of things you never did, and may not even have thought of doing?

As for Merton, yes, he was open to dialog with people of other faiths.  That is laudable.  As a volunteer for an interfaith group, it’s easy for this writer to see that more of that is needed.  On the other hand, CESJ's participation in the recent World Meeting of Families demonstrated that many Catholics (at least those who attended) already exhibit great openness.  Many of the people to whom we spoke were mildly interested until we mentioned we were interfaith, with the booth manned by a token Catholic, a token Jew, and a token Existentialist.  At that point, most of them became enthusiastic — a third party endorsement for Catholic social teaching!  The others were at least pleased and receptive to the idea that Catholic social teaching is not just for Catholics.  (A list of some of CESJ's founders, in fact, sounds like a bar joke: "A priest, a rabbi, and an imam walk into a university. . . .)

The problem is that many people take Merton’s openness as drifting into syncretism, that is, merging different religions, and there is evidence that he was going in that direction.  Many people, especially followers of E.F. Schumacher, author of Small is Beautiful, the “New Age guide to economics,” mix ’n match Christianity and Buddhism without really considering the very real differences between them, and slide all too easily into various forms of Fabian socialism, a blend of georgist agrarian socialism expanded to all forms of capital, and theosophy.

The bottom line?  Pope Francis’s admonitions and examples can be valuable — as long as we take them the right way.  Yes, emulate Day’s concern for the poor and oppressed, but leave behind her attacks on those who, with equal sincerity, didn’t happen to agree with her, and keep in mind that preference for some does not mean exclusion for others.  Be as open as Merton to other expressions of truth, but without falling into the trap of thinking all faiths and philosophies are therefore equally true and essentially the same . . . another way of saying all are equally false.