There has been a great deal going on this week, mostly in the “Getting the Word Out” Department.  It’s not even worth the time commenting on the ups and downs in the stock market.  The wild swings have gotten rid of some of the real investors, leaving the field to the speculators . . . helping us set the stage for a return to sanity with Capital Homesteading and the reversion of the secondary market to a genuinely secondary role in the economy: 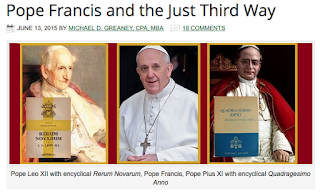 • This has been something of a banner week for Just Third Way publications.  First was the appearance this past Saturday of “Pope Francis and the Just Third Way” on Homiletic and Pastoral Review, the oldest magazine for Catholic clergy in the United States, since 2012 a completely online publication.  The article corrects certain misimpressions floating around about the meaning of natural law-based Catholic social teaching, especially in light of Pope Pius XI’s breakthrough in moral philosophy, the “act of social justice.”

• The publication of “Pope Francis and the Just Third Way” was followed on Wednesday by “Putting Pope Francis in Perspective” on Catholic365.  We can assure our faithful readers that the timing of the appearance of the two articles, as well as the similarity in the subject matter, was purely a coincidence.

• At the same time, we’ve experienced a small spike in sales of the Just Third Way Edition of Archbishop Fulton J. Sheen’s “long lost” 1940 classic, Freedom Under God.  Evidently, especially in light of the increasingly critical world situation, people are searching for solutions that are not simply a rehash of the same old thing, but that are something truly new and different, yet fully consistent with universal moral values.

• We also note the appearance of Pope Francis’s encyclical on the environment, Laudate Si.  Not surprisingly, most of the commentary on the encyclical attempts to force it to fit a liberal-socialist or conservative-capitalist framework, without regard to the underlying natural law principles.  There also seems to be some fundamental misunderstandings of the role of the pope — any pope — and the key difference between infallible knowledge of the pope’s teaching office in regards to faith and morals, and opinion of the pope as a fallible human being.  This is not surprising, as Mortimer Adler identified the failure to distinguish between knowledge and opinion as one of the ten great philosophical mistakes of the modern age.  This is despite the great lengths the Council Fathers of the First Vatican Council went to in an effort to make it clear that it is the teaching office of the pope that is infallible, and then only when speaking on matters of faith and morals, not the pope as a human being.  It may have been due in part to the efforts of James Cardinal Gibbons of the United States that the document defining infallibility was changed from “On Papal Infallibility” to “On the Infallibility of the Teaching Office of the Pope” precisely to avoid such confusion.

• Mr. Mark Gross, O.P, has requested permission to reprint “Putting Pope Francis in Perspective” in a future issue of the newsletter for the Dominican Western Province of the United States.  We have granted tentative permission, on condition that he acknowledge that the article first appeared on Catholic365.

• CESJ Fellow Jean-Marie Bukuru of Burundi has been granted a temporary extension of his visa in view of the troubled situation in his home country as the president seeks an unconstitutional third term and works to eliminate all opposition.  On May 29, the vice president of the election commission fled the country, and we received word (unconfirmed) this morning that Gervais Rufyikiri, the Hutu Second Vice President (the constitution allows for two vice presidents, one Tutsi and one Hutu) has now fled the country.  If true (we repeat that we have been unable to confirm this, and are not completely sure that the report referred to Rufyikiri, to a second vice president of the election commission, or even to someone else), it is yet more evidence that the country is imploding as a direct result of President Pierre Nkurunziza’s illegal actions.  More than 100,000 people have fled Burundi since Nkurunziza precipitated the constitutional crisis — which has caused a serious humanitarian and ecological crisis in neighboring countries, as Jean-Marie reported during a recent interview on Voice of America.

• We have a meeting scheduled tentatively with a well-placed Republican who might have some good contacts for Jean-Marie.  Now we just need to come up with a Democrat.

• As of this morning, we have had visitors from 53 different countries and 46 states and provinces in the United States and Canada to this blog over the past two months. Most visitors are from the United States, Canada, the United Kingdom, Kenya, and Australia. The most popular postings this past week were “Halloween Horror Special XIII: Mean Green Mother from Outer Space,” “Yet More on Property, II: Hudock’s Alleged Errors,” “Crisis of Reason, III: Symptoms of Irrationality,” “Thomas Hobbes on Private Property,” and “Crisis of Reason, II: The Source of the Problem.”