Or, more accurately, a question about society — what is it?  The article we had published last week in Homiletic and Pastoral Review, “Pope Francis and the Just Third Way,” has excited quite a bit of discussion on the HPR website.  Running down the list of their fifteen most recent articles and editorials, there were (as of yesterday morning) exactly thirty comments total on all of them, ranging from zero (three articles) to six (one article) and seven (one article).  For those of you not up on higher math, the average is two comments per article, exclusive of ours . . . which as of yesterday morning had twenty-one, including three republications or “trackbacks.” 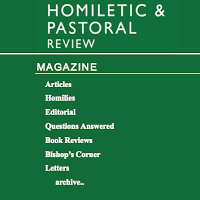 Evidently we struck a chord with some readers to get that kind of response.  Even the article to which we were, in part, responding only had five comments.  This tells us two things: 1) Agree or disagree, the Just Third Way seems to touch people where they live.  2) If Homiletic and Pastoral Review wants to spread the word about the universality of the natural law-based social teachings of the Catholic Church, they couldn’t do better than publish vast numbers of articles written by us.

That’s a totally unbiased opinion, of course.  It should not be taken as certain knowledge.  We definitely hold by Mortimer Adler’s analysis that the inability to distinguish knowledge from opinion is one of the greatest philosophical mistakes of the modern age.  It’s closely related to what the late Ralph McInerny identified as the single greatest danger facing the Catholic Church today: fideism, or basing your religious beliefs on faith without reference to the necessary foundation on reason.

Come to think of it, that’s a problem with all religions, to say nothing of civil and even domestic society these days.

Anyway, one of the commentators disagreed with our comment (you can see how complicated this can get) that Pope Pius XI “used ‘social justice’ to describe direct action on the common good, which he defined as the vast network of institutions (‘social habits) that provide the environment within which human beings acquire and develop individual virtue.”  As the commentator commented (what else do commentators do?):

“The acquisition and development of ‘virtue’ is begun and supported primarily within the family, reinforced by early schooling (best in a catholic environment), and then solidified by nurturing of an individual’s ‘well formed conscience’. The vast network of institutions flows from these, are nice, but not primary or necessary. It is a bottoms up not a top down process. The Church, as institution, should be focused on guiding the family/individuals through its teachings on Faith and Morals to be the primary wellspring of virtue (however you wish to define it).
Isn’t this the objective of the principle of ‘subsidiarity’?”

By the way, we cut and pasted the comment, so all typos are those of the commentator.  We try to be careful about that kind of thing.  To this comment we responded (in the first person, it being clumsy to write as the three people who worked on the original article without looking weird),

Ted [we called him “Ted” because that’s how he signed himself], I think you might be confusing the three different parts of human society, domestic (the Family), religious (the Church) and civil (the State). All three are essential to the full development of the human person, although different “rules” apply in each — and although both capitalists and socialists tend to deny the legitimacy of some. Socialists, for example, tend to deny the Family and the Church (e.g., even for “Christian socialists” the Church becomes merely a branch of the State, becoming both in the world and of it), while capitalists tend to deny the State and (for the pure individualist) the Family and even the Church — William Lamb, Lord Malborough, the “Lord Protector” of Queen Victoria, for example, an almost quintessential capitalist, once declared that religion is all very well in its way, but a man’s soul was his own affair.  (Incidentally, Lord Marlborough was the last Prime Minister ever to be removed by a British ruler.  Evidently Queen Victoria was not amused by him.)

As I understand the position of the Catholic Church, it acknowledges that, as Aristotle put it and as we examine in our book, The Political Animal (2014), “Man is by nature a political animal.” This means that each human being has both an individual nature and a social nature. The job of social justice is to reconcile these two natures so that individual and social life are in harmony, not conflict.

Because humanity is political — that is, having both an individual and a social nature — each human being must develop habits of doing good (individual virtue) and social habits (social virtue) that optimize the development of individual habits. We call these social habits “institutions,” and they generally take the form of custom, tradition, and human positive law in civil society.

As you accurately point out, the Family (domestic society) is the cradle of individual virtue, guided by the moral teachings of the Church. People (parents and children) relate to each other on the basis of status, not contract — that is why proposals that a husband pay his wife a salary for her services are not only objectively silly, they run directly counter to the whole purpose and structure of family life.

As children (dependents) acquire and develop virtue in domestic society, they fit themselves for emancipation to enter domestic society as “independent others”, in which people do not relate to each other on the basis of status, but on contract. A contract, to be valid, necessarily implies equality of status, or is invalid, void, or voidable, depending on the circumstances. Further, even though they are freed from the tutelage of their parents, who provided the domestic environment within which to acquire and develop virtue, people in civil society still require the proper environment to continue acquiring and developing virtue: the common good, the vast network of institutions that provide that environment. It is not merely “nice” or prudential, but an absolute necessity, given humanity’s political (i.e., residing in the organized society of the pólis) nature. This is why, for example, professed religious “live in community,” and one needs special permission to become an anchorite or hermit.

To assert, as totalitarian philosopher Thomas Hobbes did in Leviathan, that civil society is simply an extension of domestic society, with the sovereign in place of the pater familias, is to shift sovereignty from the human person where God put it, to the collective, an abstraction, a human creation. It also imposes a condition of permanent dependency on anyone within such a system, which is not consistent with human nature and the full development of the human person.