The stock market has been so volatile that even the experts are starting to get worried.  The increasingly wild swings are not “normal,” even within a Keynesian framework.  Nor is it the case that this has never happened before.  The same thing was going on right before the Crash of 1929. 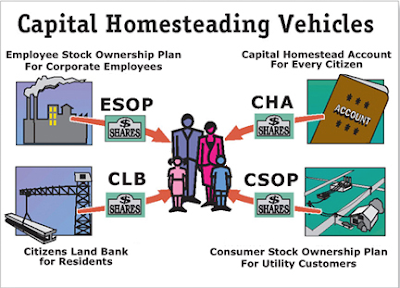 Of course, one solution is to redirect attention away from the secondary market for debt and equity, and back to the primary market for the production of marketable goods and services.  This can be done by implementing the reforms recommended in Capital Homesteading, e.g., tax reforms, monetary reforms, and reforms in how new capital formation is financed.  To get to the point where the powers-that-be not only recognize that a problem exists, but that there is a potential solution, here’s what we’ve been doing for the past week:

• On Wednesday of this week, Dr. Norman Kurland and Jean-Marie Bukuru attended a farewell gathering of the Hubert Humphrey Fellowship participants.  Jean-Marie is clearly well-thought of by both staff and participants, and took advantage of the opportunity to explain key features of the Just Third Way and introduce Norm around.  A significant number of staff and participants took business cards (and offered theirs in exchange), and expressed interest in the potential of the Just Third Way to establish economic justice for the family, as well as every child, woman, and man affected by poverty, the lack of which is a growing problem throughout the world, not merely the United States.

• This is not to say that the wealth and income gap in the U.S. is not a problem, or that nothing need be done.  It is essential that people be maintained in some semblance of human dignity during the search for a solution as well as in the early stages of its implementation.  Meeting the needs of the hungry, the homeless, and the unemployed is a matter of the highest priority.  As Brian Corbin, senior vice president for social policy at Catholic Charities USA, stated earlier this year, “There are millions of people at stake in these decisions.  They all have a name and a face and based on our principle of human dignity, that name and that face and that family, those really are important to making issues of poverty real.”  An unsustainable program of redistribution is not a solution, however, which is why CESJ has joined with other organizations to present a framework for a possible solution at the upcoming World Meeting of Families in Philadelphia this September.

• Also on Wednesday Dr. Norman Kurland and Jean-Marie Bukuru met with Brian Corbin of Catholic Charities and discussed Jean-Marie’s situation.  The meeting was very positive, and Brian made a number of insightful comments and gave some very helpful suggestions.  Norm and Brian also discussed Norm’s early work during the War on Poverty, during which Norm prepared guidelines for maximum feasible participation of the poor.

• Dr. Norman G. Kurland has discussed the Just Third Way, especially the Citizens Land Bank/Cooperative concept and its application with Chris K. of Lincoln Park, Michigan, near Detroit.  Chris would like Norm to have telephone conferences one-on-one to explain the concept to members of the city council for possible application in a model pilot project.  Once a CLB/CLC is implemented, it could be possible to implement the Homeowners Equity Corporation as a second step.

• Dr. Norman G. Kurland has also discussed Catholic education and CESJ's Justice University program with Mr. William McNamee, host of the weekly radio “Catholic School Spirit Show” in Chicago and available as a podcast as well.  Bill seemed particularly interested in the fact that Norm, who is not a Christian, as his first job out of law school was given the task of making the case against government aid to Catholic schools.  As every good advocate should, Norm investigated the opposition’s case (that is, the case of those in favor of government aid to religious schools) . . . and reversed himself.  Norm is today a staunch advocate of vouchers for education and healthcare, which can take up the slack and ensure genuine choice until Capital Homesteading can optimize the possibility of an adequate and secure income for all.

• As of this morning, we have had visitors from 46 different countries and 46 states and provinces in the United States and Canada to this blog over the past two months. Most visitors are from the United States, the United Kingdom, Canada, Australia, and Switzerland. The most popular postings this past week were “Halloween Horror Special XIII: Mean Green Mother from Outer Space,” “Thomas Hobbes on Private Property,” “Yet More on Property, II: Hudock’s Alleged Errors,” “Crisis of Reason, III: Symptoms of Irrationality,” and “Crisis of Reason, II: The Source of the Problem.”