The State of American Education

We’ve been doing a little research into the writing of Robert Maynard Hutchins, president and later chancellor of the University of Chicago.  Much to our surprise, most of his books are fairly short and even entertaining — if you like his sort of sense of humor (we’ve seen people read or view his ludicrous satire, Zukerkandle! and not crack a smile while others were practically rolling on the floor laughing).

This posting is inspired by a speech Hutchins gave in 1947, “The Education We Need.”

It has been three-quarters of a century since Robert Maynard Hutchins of the University of Chicago gave his speech.  His grim picture of American higher education subsiding into vocational training and what amounts to babysitting came as no surprise to his audience.  Hutchins had been issuing his warnings for years; his efforts at reform had become a byword.

Despite the dismal tone of his remarks, however, Hutchins gave reason for hope.  A fundamental restructuring, almost a complete repurposing of the American educational system would, he believed, revive the true American democratic spirit.  This would provide a solid foundation on which to build respect for the dignity of every person.  It would entail effective equality of opportunity and access to the means for each person to grow in virtue, that is, “human-ness.”

As Hutchins saw it, the true purpose of a liberal education is not rote memorization of facts or indoctrination in acceptable ways of thinking, but to learn how to think.  Learning how to think enables “the citizen to work out for himself a set of principles by which he may live.”  These are the fundamental principles of what it means to be human, which in the American culture reach their highest expression in the great books of the western world.

Seconding Hutchins’s efforts was Mortimer Jerome Adler, the greatest, or at least the best known, Aristotelian-Thomist philosopher of the twentieth century in the United States, whom Hutchins had brought to the University of Chicago.  A year and a half after Hutchins’s speech, Adler gave a talk in Chicago during “Great Books Week,” September 1948.  This was a series of events organized at the behest of Mayor Martin H. Kennelly to recognize the importance of the great books to adult education.  Adler’s theme was “books of lasting humanistic significance that have left their mark on the development of thought and culture in the first half of [the twentieth] century.” (Mortimer J. Adler, Reforming Education: The Opening of the American Mind.  New York: Collier Books, 1990, 343.)

Less optimistic than Hutchins, in his 1940 essay “This Prewar Generation” Adler had answered his own question, “Can anything be done about American education?” with “Probably not.”  He then spent the rest of his life trying to do what he had started out saying likely couldn’t be done. 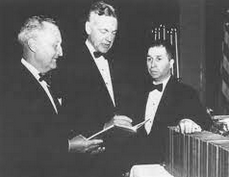 Where Hutchins focused on restoring intellectual rigor and honesty to the American university, Adler put his emphasis on doing the same for the American universal.  Hutchins was more concerned about teachers and leaders, while Adler was looking at the whole of society.

These are generalizations, of course, but they would explain Adler’s efforts to reach out to “the common man” with universal principles.  As he said, “all children are truly educable and educable in precisely the same sense of that word.”  Adler “explicitly reject[ed] the elitist view that only some are innately well enough endowed to be educable, while the rest can only be trained for routine jobs, not prepared for the duties of citizenship and not prepared for continued learning in adult life.” (Mortimer J. Adler, Paideia Problems and Possibilities.  New York: Macmillan Publishing Company, 1983, 30-31.)

Hutchins was marginally successful in getting the great books program adopted by some universities, at least in part.  A large measure of this success can probably be attributed to Adler, who popularized the concept through countless books, articles, speeches, radio, and television appearances.  Ironically, this last — which had not achieved either popularity or its status as “a vast wasteland” when Hutchins gave his speech — as well as the internet, have probably done more to undermine, even trivialize American education than any other factors. Adler may very well have viewed his entire career, at least that aspect of it with which the public was familiar, as Sisyphean.  He was constantly pushing the rock of reason up the increasingly steep slope of American indifference, even hostility to truth, reason, and common sense, only to have it roll down again in response to the latest fad, pop psychology theory, political movement, or manifestation of what is known today as wokeness and cancel culture.  The “Paideia Proposal,” of which Adler was the prime organizer and spokesman, is a system of liberal education for everyone, regardless of age, economic or social status, or anything else.  It is intended to reform the antiquated, even anti-human educational system that evolved during the nineteenth century.

Hutchins also protested the American educational system, based on a distorted understanding of liberal democracy fundamentally alien to the American spirit and to the founding principles of the United States embodied in the Declaration of Independence and the Constitution.  This is not the flawed human application of those principles, of course, but the ideal toward which all citizens, in individual and social justice, must strive in their efforts to form a “more perfect union,” as it says in the Preamble to the Constitution.