On Monday, August 15, 2022, to mark the seventy-fifth anniversary of the end of British rule of (most of) India and set the goal for the full century mark coming up in twenty-five years, Prime Minister Narendra Modi has “pledged to raise millions out of poverty and turn India into a developed country.”  (“Economic Vow Made on Independence Day,” Wall Street Journal, 08/16/22, A-16.)  He underscored his promise by declaring that “the world was looking toward India to help resolve global issues.”


Key to the effort, apparently, is the need “to remove trace of colonial mind-set.”  In this, “India will be guided by the ideals of self-reliance and the spirit of international partnership to attain excellence in science technology, establish industries, and attain food and energy security.”  This is laudable, even noble . . . but it’s been tried before, and more than once.  It seems that India has left the most damaging relic of the colonial era remain in full force, evidently without realizing that’s what it is.  We’re talking about the presumed need to finance economic development out of past savings instead of using a modern financial system the way intended.

Under the Great East India Company, India was privately owned and run like any other corporation: at a profit to benefit the shareholders.  The Company (always capitalized) was one of the few under British law to have limited liability to encourage as many people as possible to become owners . . . as many people as possible in Great Britain, that is.  We couldn’t find anything that mentioned share ownership by Indians.  Natives either worked for the Company for wages or traded with the company as suppliers.  Very little trade went the other way, into India, for few Indians could afford British goods. Economic development was carried out for the sole purpose of generating a profit for the benefit of English shareholders and funded exclusively from past savings.  This meant that only the Company or rich individuals could engage in development, as the ordinary Indian lived from hand-to-mouth, usually in perpetual economic slavery to the local moneylender or landlord.

When the British Crown assumed direct rule of India following the Great Mutiny, the philosophy of governance was changed, but not the reliance on past savings.  Rich nabobs tended to remain rich, and profits went to the British government instead of to ordinary Indians. 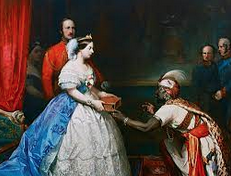 Not that the British didn’t try to further economic growth and pay at least lip service to the myth that a rising tide lifts all boats.  Again, however, even what good intentions they had were foiled by the reliance on past savings.  To finance development, the British bought massive amounts of silver, minted it into rupees, and poured it into the economy.  Some years British purchases of silver for India were more than total world production, and this at a time when a virtual tsunami of silver was coming out of the mines of North and South America.

Naturally, the huge amounts of new currency were available only to people who could purchase it . . . which meant the already-wealthy.  The ordinary poor Indian stayed poor.  Eventually fiat money backed with government debt replaced silver, and the Republic of India replaced the British Raj, but nothing replaced reliance on past savings.  Gandhi’s idea of having village handicrafts replace manufactured goods and foreign imports was virtually custom-made to keep the great mass of people poor and dependent on the village moneylender, even as he excoriated their predatory lending.

If India really wants to become a developed country and ensure that as many people as possible participate in the benefits, they will have to adopt the Economic Democracy Act and get completely away from any reliance on past savings.