This week’s news items focus on the value and role of human labor, particularly its replacement by advanced technology or cheaper foreign labor.  The solution is not to raise wages articifically or redistribute, but to institute the Just Third Way of Economic Personalism and the Economic Democracy Act: 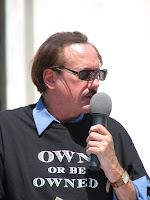 • Workers Leaving Workforce. According to a Yahoo! Finance news story, instead of going back to work, many Americans are choosing to stay out of the workforce, making it difficult for employers to find enough people to fill jobs.  At the same time, the number of job openings is starting to decline!  None of the analysts bother to say how this apparent paradox is happening, but we have a theory.  A company needs to produce a marketable good or service to stay in business, at least normally it does.  If it can’t get a product to market using human labor, it must find some

substitute: technology.  Implementing advanced technology reduces the number of jobs available.  It makes sense that if human beings won’t fill jobs, companies are going to start filling the need with advanced technology.  This raises the question as to how former workers are to have an income.  Louis O. Kelso answered that question many decades ago.  As he was quoted in an editorial in Life magazine in July of 1954, “If the machine wants our job, let’s buy it.”

• Johnson and Johnson.  In order to simplify or streamline administration or something or other, Johnson and Johnson (“a family company” . . . whatever that means) is going to divide.  split off its pharmaceuticals from the rest of the business or vice versa.  Of course, what pops immediately into our minds is which one will be called Johnson, and which will be called Johnson.  The other thing that comes to mind is, What’s in it for me?  Or the workers?  Or the consumers?  Wouldn’t it be in everyone’s best interest if more people owned a piece of the action?  AND had access to the wherewithal to do so, i.e., access to money, credit, and collateral?  You know, something like the Economic Democracy Act?

• “They” Aren’t “Poor” But. . . .  According to another Yahoo! Financial news article, many workers aren’t “making it” on what they’re paid (which might also explain why so many workers are opting out of the workforce), even though they’re well above the official poverty level.  Of course, the objective value of labor —economically speaking — has been falling for some time in competition with advancing technology, and income has only kept even inadequate pace by artificially forcing up wages, which ultimately works to the disadvantage of the worker by making his or her replacement by technology or cheaper foreign labor more attractive to employers.  What’s the real solution?  As Walter Reuther noted more decades ago than we care to ponder, “The breakdown in collective bargaining in recent years is due to the difficulty of labor and management trying to equate the relative equity of the worker and the stockholder and the consumer in advance of the facts….  If the workers get too much, then the argument is that that triggers inflationary pressures, and the counter argument is that if they don’t get their equity, then we

have a recession because of inadequate purchasing power. We believe this approach (progress sharing) is a rational approach because you cooperate in creating the abundance that makes the progress possible, and then you share that progress after the fact, and not before the fact.  Profit sharing would resolve the conflict between management apprehensions and worker expectations on the basis of solid economic facts as they materialize rather than on the basis of speculation as to what the future might hold…. If the workers had definite assurance of equitable shares in the profits of the corporations that employ them, they would see less need to seek an equitable balance between their gains and soaring profits through augmented increases in basic wage rates. This would be a desirable result from the standpoint of stabilization policy because profit sharing does not increase costs. Since profits are a residual, after all costs have been met, and since their size is not determinable until after customers have paid the prices charged for the firm’s products, profit sharing as such cannot be said to have any inflationary impact upon costs and prices…. Profit sharing in the form of stock distributions to workers would help to democratize the ownership of America’s vast corporate wealth.”

• Blog Readership.  We have had visitors from 32 different countries and 33 states and provinces in the United States and Canada to this blog over the past week. Most visitors are from the United States, the Philippines, Canada, the United Kingdom, and Italy.  The most popular postings this past week in descending order were “News from the Network, Vol. 14, No. 44,” “JTW Podcast: (Not So) Secrets of the Fed,” “‘Inequality is the Root of All Social Evil’,” “Social Justice IV: The Characteristics of Social Justice,” and “What is ‘Social Justice’?”