What is “Social Credit”?

When settlers from Europe became somewhat familiar with the flora and fauna of the New World, they naturally began giving names to what they found.  They made a number of mistakes, such as calling the indigenous inhabitants “Indians” even long after it was obvious that the lands were not India.  There was also the problem with things like buffalo (which are really bison), and calling a wapiti an elk, and then when a true elk was found, calling it a moose, since the e-word had already been given to another animal.

We have a similar problem with the term “social justice,” especially when people insist — even after we’ve carefully defined how we use the term — that we must mean something entirely different.  We mean the particular virtue directed to the common good, which we further define as that vast network of institutions within which human persons work to become more fully human.  To get really technical, of course, “the common good” — the good common to all human beings and thus what defines us as human beings — is the analogously complete capacity to acquire and develop virtue inherent in every human being . . . but we don’t need to get that technical, especially for purposes of this discussion.

Our subject today is the term “social credit.”

We’ve been more or less familiar with what C.S. Lewis called “the Douglas Scheme” for quite some time, although followers of Major Douglas’s thought insist that we’ve got it all wrong, wrong, wrong . . . at least when they take a break from going after each other hammer and tongs.  We’ll get to that later, however.  What we’re interested in today is the program the People’s Republic of China is in the process of implementing, which in its particulars has nothing in common with “the Douglas Scheme” apart from the term “social credit,” although there is a common ground — which we will get to, later. 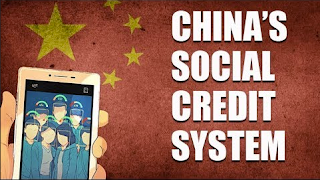 To explain, the Chinese “Social Credit System” is a program that rates people on their “reputation” . . . as determined by government agents.  It is intended to standardize the assessment of citizens’ and businesses’ economic and social reputation, or their “Social Credit.”  Perhaps more crudely put, it’s a way to see how well someone or something fits into official preconceptions about what constitutes appropriate social and economic behavior.

Violators — the “untrustworthy” — can be punished by social and economic excommunication.  Offenders are blacklisted, and it can take years to be taken off the list, which process appears to be incredibly arbitrary, and may rely more on “favors” and judicious payments made to officials’ personal treasury.  It calls to mind the proscriptions during the latter days of the Roman Republic, when people who had done nothing but have something someone else wanted were sentenced to death on the word of anonymous informers. 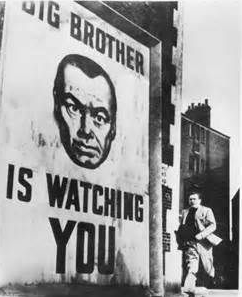 George Orwell’s novel 1984 did the same thing, but not as well — and that was fiction.  It is also a strong tendency in the “real world.”  It’s a problem inherent when fanatics attempt to establish and maintain a perfect world: actual human beings almost always interfere with it by being human.

To the fanatic, anyone who refuses to go along with or — worse — opposes the fanatic’s corrective action places him- or herself beyond the Pale.  As a result, by presumed stupidly or stubbornly not participating enthusiastically in the program to create or recreate the perfect society, a Kingdom of God on Earth, (other) people can be classed as “ungodly” or (as in Chinas) “untrustworthy.”  Such people can either be deprived of rights or not recognized as persons or even as human.

“Ungodly”/”untrustworthy,” of course, must be taken in an extremely broad sense.  In this context, fanatic atheists and agnostics as well as Jews, Christians, Muslims, and pagans can — and do — make the determination regarding the supposed ungodliness or untrustworthiness of others.  This turns the others into “outlaws” (literally), against whom any and all action is appropriate and justifiable.

This is a key point, for identifying as “ungodly” or “contrary ‘to sound popular feeling’” as the Nazis did (George H. Sabine, A History of Political Theory, Third Edition.  New York: Holt, Rinehart and  Winston, 1961, 918) someone who disagrees with a position or claim may have nothing to do with traditional religious forms or even recognition of a God or gods on the part of whoever is doing the judging.  It depends solely on what whoever is making the determination recognizes as the supreme power in the universe.

This can, of course, be some personal version of the God of Abraham, Isaac, and Jacob, and often is.  More often, however, the supreme power is identified (even unconsciously) as the State, the government, the People — the sociologist and proto solidarist David Émile Durkheim (1858-1917) conceived of “God” as a “divinized society” — but usually as a projection of one’s self.  This is what Gilbert Keith Chesterton (1874-1936) called “the God Within,” or “the Inner Light.”

As a matter of course the fanatic’s idea of the supreme power becomes a sort of Platonic ideal that assumes as it were an existence independent of the imagination of the enthusiast.  Enthusiasm or love for this ideal, what Msgr. Ronald Knox called “an excess of charity [that] threatens unity,” inspires attempts to transform the whole of society or even to create an entirely new society.  The new form of society (or entirely new society) is, of course, along the lines dictated by the ideal to create the Kingdom of God — or whatever is accepted as the supreme power — on Earth as the be-all and end-all of human existence.

In this way even the most secularized or atheist society can meet the criteria of the enthusiastic Kingdom of God on Earth.  A theocracy without a qeoV, a religion without God, becomes the model of the perfect society.

The problem of what to do with those who refuse to go along with the program assumes overriding importance, even if such recusants make no open objections to others living the life they choose or are completely indifferent to them.  The fanatic’s excess of charity, now replacing all other virtues (especially justice) demands that everyone must adopt the new way of life in order to achieve salvation, whether temporal or spiritual.

In extreme cases, fanatics feel compelled to destroy whatever comes into conflict with their ideal.  Seeing themselves as a chosen people or an elect, and others as lesser forms of humanity or as in- or non-human, it becomes not a question of disregarding the rights of others.  Instead, it is a matter of accepting the premise that the ungodly have no rights to begin with, or at least no rights that the godly are bound to respect. 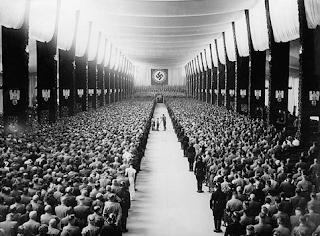 For example (and highlighting the fact that the determination of “ungodliness” may have nothing to do with any organized religion or even common humanity), George Holland Sabine (1880-1961) noted that in both Fascist Italy and Nazi Germany the legislatures made human positive law “studiously vague so that all decision became essentially subjective.” (Ibid.)  As Sabine continued,

The penal code [of Nazi Germany] was amended in 1935 to permit punishment for any act contrary to “sound popular feeling,” even if it violated no existing law. . . . Obviously no rational administration of such statutes was possible.  Equality before the law and due process were supplanted by complete administrative discretion.  What totalitarianism meant in practice was that any person whose acts were regarded as having political significance was quite without legal protection if the government or the party or one of their many agencies chose to exert its power. (Ibid.)

Naturally, in a totalitarian system such as fanaticism imposes, all acts have political significance.  This, as Knox pointed out, is because the fanatic’s goal is not to perfect his own human nature and become more fully human.  He is already perfect and fully human.  His goal is to save not himself, but to save humanity by creating a perfect society.

A perfect society requires a perfect humanity, which in turn requires perfect people.  The fanatic must therefore destroy imperfect human nature in others, recreating it in his own already perfected image.  This justifies coercion, reeducation, eugenics, abortion, euthanasia, and so on.  Only in this way is it possible for others to become fully human.

Nor is Major Douglas’s social credit all that different in orientation, although it certainly has the potential to do the same thing, as we will see when we address this subject again.