“Farewell to a Father”

Sunday evening, December 6, I received some extremely shocking news.  John Moorehouse, an old friend and professional colleague, had died suddenly of a heart attack at the age of 51.  He left a wife and five children.  TAN Books, for which John served as editor, has started a GoFundMe campaign for his family. 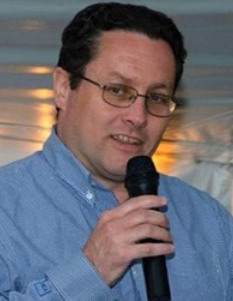 The next day, Monday, December 7, I received a copy of Dr. Robert Moynihan’s beautifully written tribute to John, the title of which I borrowed for this blog posting:

Farewell to a Father

These are some of my own remembrances and appreciation for what he meant to the Just Third Way:

I met John many years ago when he was starting the Catholic Men’s Quarterly.  If I remember correctly, his uncle had been reading a series of articles I had written for World Coin News on Irish coinage during the Wars of the Roses, for which I had received an award from the Numismatic Literary Guild for best series of articles.

When John mentioned he was looking for someone to write articles on military history for “the Church Militant . . . Real Militant” feature in his new magazine, his uncle suggested giving me a call, which John did.  When John found out I had also published in Military History and Military Heritage magazines and had an orthodox, Aristotelian-Thomist natural law understanding of Catholic social teaching, the only problem with anything I wanted to write for the CMQ was length — I tend to include everything in the story, especially when others may have glossed over, misinterpreted, or even completely omitted a key element or fact.

John, in fact, was one of the few editors or publishers in the Catholic media who seemed to have an almost instinctive grasp of what we at CESJ now call the Just Third Way of Economic Personalism.  (Some others are the late Father John H. Miller, C.S.C., S.T.D., of the Central Bureau of the Catholic Central Union of America in St. Louis, editor/publisher of Social Justice Review, Father Edward Krause, C.S.C., Ph.D., current head of the CCUA, Father Matthew Habiger, O.S.B., Ph.D., former head of Human Life International and publisher of HLI’s newsletters and reports, and Dr. Robert Moynihan of Inside the Vatican magazine.)

When John shut down the CMQ we lost touch for a little while, but he reconnected when he became Acquisitions Editor for TAN Books.  As an interesting note, I was involved in the effort to save the original TAN in its final bankruptcy proceeding, and we had a viable plan that would have recouped all of the creditors’ money with interest in seven to fifteen years.  An important part of the proposal was the fact that an S-Corp that is 100% owned by the workers through an ESOP trust pays no state or federal corporate income taxes.

John reconnected because he had an idea.  He wanted me to collect the articles on military history I had contributed to the CMQ and put them in book form.  John’s idea was a collection of stand-alone articles, but after discussion we decided that a “themed” collection, focusing on the long struggle against the Ottoman Turks, would be a better product.

Thus was born the book that became Ten Battles Every Catholic Should Know.  Not my title, as I always said to John.  He claimed he liked my alternative title that I came up with as a joke much better: Dracula and Billy the Kid Meet Mehmet the Conqueror, or, A Child’s Garden of Siege Warfare.  (Actually, the working title he really liked was Eternal War, but Ten Battles fit into a theme.)

We even had plans for a follow-up collection of other battles Catholics (and others) should know, as well as a multi-volume work on “How Christendom Became Catholic,” spanning the period from the founding of Rome down to Charlemagne and the reestablishment of the “regnum of the West” in competition with Constantinople (the other Roman Empire).

What put these other history projects on hold — for a time — was John’s interest in, and support for the Just Third Way.  He would sometimes call just to talk about our proposals for economic reform that he saw as fully consistent with Catholic social teaching.  Finally, after buttering me up sufficiently, he requested “on spec” as many books as I could write tying the Just Third Way to Catholic social teaching.  I drafted and sent him half a dozen before he asked me to put the others on hold while he waited for the right time to pitch them to his boss.

And the right time?  Ironically, we agreed it would be after I published either What Happened to Social Justice (still in process) or Economic Personalism: Property, Power and Justice for Every Citizen, which is now out in print.  We were preparing to send John his copy this past Monday.  Last week I had sent him an email asking for his mailing address, telling him the book was finally ready, putting on the subject line, “Los Libros Son Aqui!” and in the email, “Or is that ‘estan’?” He immediately responded, “Estan.  Awesome.  Send it to me at,” etc.

On Sunday, I was working on the draft of the cover letter to John and others in the first round of complimentary copies, when I received an email from Steve Cunningham telling me that John had died.

All of us here at CESJ were saddened, even shocked.  It hadn’t been too long ago that John stopped by for lunch on one of his trips through DC.  As I recall, I made arroz con pollo, which is my “go-to” dish for special guests.  Everyone was impressed with John, especially his grasp of the Just Third Way, and his plans for me.  It always baffled him why more people didn’t seem to see the common sense of what we are saying, and how well it conforms to the Church’s social doctrine.

It was just a few months ago that John introduced me to Steve Cunningham who, in addition to everything else he does, has the Sensus Fidelium YouTube channel.  We hit it off and, somewhat to our surprise, have turned out more than two dozen videos that in total have gotten upwards of 70,000 views in a very short time.

I remember John telling me once I was one of the easiest writers he had ever worked with, to which I had replied, “I bet you say that to all the writers.”  I had been apologizing for being difficult for insisting on a point that the TAN Copy Editor thought should be another way.

A great loss for all of us.