Have you figured out why the stock market surges when things look the worst, and drops when it looks as if the situation might improve?  Neither have we.  So let’s get straight to this week’s news items:


• Bitcoin Derivatives?  Are they kidding?  Just when you thought things couldn’t get any more surreal, we just found out about Bitcoin and other cryptocurrency derivatives.  It seems they’ve been around for a bit (sorry), but we’d never come across them until we received an enquiry from a journalist asking for information (read “investment and speculation tips”) about them.  You know, of course, that the Bitcoin (in common with every other cryptocurrency of which we have knowledge) is issued to no standard and has no backing.  It is a “virtual commodity” with no “underlying” — that is, is tied to nothing that “underlies” its presumed value — and therefore is what the classical economists of the Banking School used to call a “fictitious bill” and governments in the pre-Keynesian era used to call “counterfeiting.”  To issue derivatives with Bitcoin as the underlying is to have a derivative with an underlying derivative (money is a derivative of what backs it) that itself has no underlying!  As Indian sages used to ask, What is the tortoise on which the world rests walking on?  It seems to be something along the lines of the sound of one hand clapping.
• Magical Money.  Speaking of derivatives with no underlying, the New York Times had an interesting article on the modern money question, “How the Government Pulls Coronavirus Relief Money Out of Thin Air.”  From the perspective of the Banking Principle that we have addressed a number of times on this blog, there are a number of theoretical and practical problems with the article, but none with the general point being made: Where is the money coming from?  Essentially, what has happened is that the government has obtained a magic lamp that it can rub to get all the money it wants just by asking for it.  This is the logical end of Keynesian economics and Modern Monetary Theory, in which “money” consists of a non-repayable debt the nation owes itself.  See Harold G. Moulton, The New Philosophy of Public Debt.  Washington, DC: The Brookings Institution, 1943, for a dissenting analysis.  The coronavirus relief package is, frankly, exactly what the Keynesians have wanted for years: the entire money supply under the complete control of the State.
• The Brave Little Store Manager.  Every once in a while what goes around, comes around, and someone gets what is coming to him.  It recently happened in South Australia.  We won’t use the language (or the accent) of the commentator or the store manager, but you can watch it yourself.  It seems that a customer who had purchased 4,800 rolls of toilet paper (more than thirteen years’ supply at a roll per day, even counting leap years) and 150 liters of hand sanitizer (nearly forty gallons) wanted a refund.  As the store manager said, some people have been buying everything in sight, even things they can’t possibly use, depriving others of essential goods.  The store manager informed the customer that he was part of the problem, and flipped him off.
• Frightening Debt Figures.  For a number of reasons that can be spelled K-E-Y-N-E-S, there is a widespread myth that “money” must be backed by government debt or it isn’t really money.  As we have shown for years on this blog, however, not only is this belief misleading, it has led to a situation in which most people have become dependent on government (as Keynes intended) and the world is saddled with what appears to be an unrepayable burden of debt.  To illustrate this sad condition, we recently received a link to an expanded “debt clock” that supplements (or replaces if you like) the National (U.S.) Debt Clock we’ve been referencing.  This World Debt Clock gives data for the world, not just the U.S.  Of course, this is not a solution.  We think that only abandoning Keynesian economics as well as all other “Currency Principle” schools of economics will get things back on track and virtually eliminate government debt as the major factor in the world’s money supply (yes, we know, financial heresy to Keynesians and quite a few others), but that’s a story for another day (or you could just go back and review past postings on the subject.  We haven’t exactly been silent on the subject). 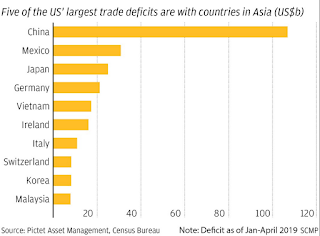 • Paid in the U.S.A.  Approximately 12% of U.S. GDP is exports of domestically produced goods and services.  China accounts for less than 8% of that, or approximately 1% of total U.S. GDP.  What would happen if the United States moved all production from China back to the U.S., automated production as much as possible, and gave every child, woman, and man in the U.S. the opportunity and means to become owners of domestic productive capacity as described in the proposed Capital Homestead Act?  By increasing consumption by an average of 1% across the board, the increase in domestic consumption would offset the loss of everything China purchases from the U.S., per capita disposable income would increase as U.S. citizens received labor and ownership income, and the monetary and tax reforms alone would enable the U.S. to redeem all the U.S. debt held by China within a generation. 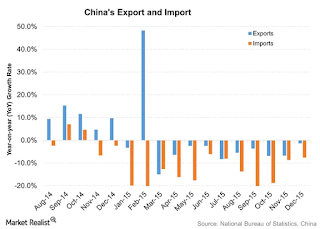 • Chinese GDP.  As noted above, exports to China account for 1% of U.S. GDP, and overall are 12% of the U.S. economy.  In contrast, exports account for 40% of China’s GDP.  Clearly this is unsustainable.  As has been known for centuries, such trade imbalances endanger the sovereignty of debtor nations as well as their economic stability and strengthen the position of creditor nations . . . and China is becoming the single largest creditor nation on Earth.  Neither individuals nor countries can consume without producing for very long, but that is exactly what a trade imbalance is.  The temptation for creditors is always to eliminate those who consume without producing (the Nazi “liquidation” of “useless eaters” and “life unworthy of life”) or take over the debtor, which can go from economic warfare to the more usual kind.
• Impossible Finance.  The Small Business Administration reports that it has run out of money less than two weeks into the program, running through almost $350 billion in 13 days.  This graphically illustrates the immediate danger associated with relying on existing money to finance growth.  Operated properly, any economy with a commercial banking system backed up with a central bank cannot run out of money, as money is created by the banking system by loaning it out for financially feasible projects.  This is why commercial and central banks were invented: to provide “adequate accommodation” so that there need never be a feasible project that could not be financed.  To say you’ve run out of money for business is like saying you’ve run out of inches for measuring.  It simply doesn’t make sense.  If the SBA had, instead, offered loan guarantees or even arranged for private sector capital credit insurance and reinsurance to collateralize standard commercial bank loans rediscounted at the Federal Reserve, it wouldn’t have had to spend any money at all until and unless there was a loan default, and then it would be far less than making the loans in the first place,
• Pity G.K. Chesterton.  You have to feel sorry for G.K. Chesterton, writer, amateur philosopher (as everyone should be, doing it for love, not money), Christian apologist, critic (in a good way), and promoter of “distributism,” a policy of widely distributed private property.  The poor guy has always suffered more from his friends than from his enemies.  Most modern distributists, for example, assume as a matter of course that distributism is a form of either socialism or of capitalism.  This leaves them wide-open for criticisms such as found in this article.  You see, the problem with assuming that everything must be either capitalism or socialism means that you effectively limit ownership to a few to preserve private property (capitalism), or you abolish private property to broaden “ownership” (socialism).  A careful reading of what Chesterton actually said shows he was trying to get away from both systems . . . which cannot be done within the prevailing economic climate that is based on disproved assumptions, e.g., that new capital formation absolutely requires accumulated savings.  This “slavery of savings” necessarily restricts ownership of new capital to the wealthy who can afford to save (capitalism), or to the State that can take away ownership and redistribute (socialism).  This is why Chesterton very carefully refrained from giving specifics on how to get from what we have now (the Capitalist, Socialist, or Servile/Welfare State).  When Chesterton’s confrere Hilaire Belloc tried to present a program, he fell into de facto socialism and gave up in near despair (An Essay on the Restoration of Property, 1936).  The “distributist movement” fell into the hands of adherents of the very “new things” of socialism, modernism, and the New Age that Chesterton devoted his life to countering, and has never gotten away from them.  This is demonstrated by their associating distributism with the proposals of, e.g., Henry George, Arthur Penty, Major Douglas, R.H. Tawney, E.F. Schumacher, and other socialists.  Once it is realized that new capital can be financed by monetizing the future stream of income expected from the capital, however, widespread ownership becomes possible without abolishing private property, and a practical “distributism” such as Capital Homesteading, can be implemented and maintained.
• Shop online and support CESJ’s work! Did you know that by making your purchases through the Amazon Smile program, Amazon will make a contribution to CESJ? Here’s how: First, go to https://smile.amazon.com/.  Next, sign in to your Amazon account.  (If you don’t have an account with Amazon, you can create one by clicking on the tiny little link below the “Sign in using our secure server” button.)  Once you have signed into your account, you need to select CESJ as your charity — and you have to be careful to do it exactly this way: in the space provided for “Or select your own charitable organization” type “Center for Economic and Social Justice Arlington.”  If you type anything else, you will either get no results or more than you want to sift through.  Once you’ve typed (or copied and pasted) “Center for Economic and Social Justice Arlington” into the space provided, hit “Select” — and you will be taken to the Amazon shopping site, all ready to go.
• Blog Readership.  We have had visitors from 44 different countries and 43 states and provinces in the United States and Canada to this blog over the past week. Most visitors are from the United States, Canada, Spain, the United Kingdom, and Argentina.  The most popular postings this past week in descending order were “The Idea of Social Justice,” “News from the Network, Vol. 13, No. 15,” “How Commercial Banks Create Money,” “Pope Francis and the UBI,” and “It Was Automation.”
Those are the happenings for this week, at least those that we know about.  If you have an accomplishment that you think should be listed, send us a note about it at mgreaney [at] cesj [dot] org, and we’ll see that it gets into the next “issue.”  Due to imprudent language on the part of some commentators, we removed temptation and disabled comments.
#30#