A Challenge to Civilization

In the opening of A Tale of Two Cities, Charles Dickens noted that the French Revolution was a time so like his own day as to be practically indistinguishable.  Although Dickens was employing a literary device to bring the reader into the story, a similar observation could be made comparing the early twentieth century to the present time.


Since the advent of the new things, the idea has pervaded the popular consciousness that sovereignty resides in the abstraction of the people as a whole, not in actual individual human beings.  As a result, it has seemed natural to most people that the State has taken over more and more control not only over the common good and national interests, but every aspect of their daily lives.
For example, during the 1920s and 1930s virtually every government on Earth abandoned a fixed standard for its currency and began backing issues with government debt instead of private sector hard assets.  Theorists have justified this on many grounds, but the real reason was to give governments complete control over money and credit, thereby vesting them with near-absolute economic power over their own citizens. (Cf. Quadragesimo Anno, §§ 105-106.)
Nor has this been without cost to the State as well as to its citizens.  National debts have skyrocketed, destabilizing economic life, sometimes bringing it to a virtual standstill.  In some instances the State, having destroyed as many other institutions as possible to bring everything within its own sphere, has tried to do so much that it has ended up able to do nothing.  As Pius XI noted,
When we speak of the reform of institutions, the State comes chiefly to mind, not as if universal well-being were to be expected from its activity, but because things have come to such a pass through the evil of what we have termed “individualism” that, following upon the overthrow and near extinction of that rich social life which was once highly developed through associations of various kinds, there remain virtually only individuals and the State. This is to the great harm of the State itself; for, with a structure of social governance lost, and with the taking over of all the burdens which the wrecked associations once bore, the State has been overwhelmed and crushed by almost infinite tasks and duties. (Ibid., § 78.  Cf. Rerum Novarum, § 3.)
With the rise of the Nation State, not by coincidence in concert with the new things of socialism, modernism, and the New Age, the human person has become a cipher in a society presumably organized for his benefit.  Economic disenfranchisement and the alienation of the human person from private property was the trend of the nineteenth century.  Political disenfranchisement and the alienation of the individual from all institutions except the State was the mark of the twentieth century.  The combination resulted in virtually the complete alienation of the human person from society.
Not that the process of economic disenfranchisement slowed.  It accelerated.  Because (as Daniel Webster, 1782-1852, pointed out) “Power naturally and necessarily follows property,” the more people became dependent on wages for their subsistence, the more powerless they became, and the more isolated from the institutions of the common good.
Over the course of the nineteenth century, the responsibility for the wellbeing of the individual and the family shifted.  In the early nineteenth century most people were owners of capital, whether in the form of land or technology, and depended on themselves and their immediate friends and family to be productive.  By the end of the century, most people owned no significant amount of capital.  They depended on the relatively few owners of capital for a wage system job. 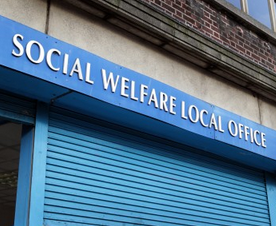 As the productive capacity of technology began far outstripping that of human labor, private industry could not carry the burden of being able to provide workers with adequate and secure incomes, and the State had to step in.  Minimum wage laws, mandatory pensions and benefits, and increased taxation to support social welfare programs began taking a larger and larger share of corporate profits.
To sustain corporate profitability, ensuring that the private sector would continue to function, the State then began taking over a part of the burden in the form of social welfare programs, government old age pensions, and subsidies to corporations for job creation — “corporate welfare.”  This required debt financing and monetization of government deficits to fund social programs.  To be able to continue to float additional debt, governments were forced to abandon fixed monetary standards and asset-backed currencies.
What resulted, as the solidarist labor economist Goetz Antony Briefs (1889-1974) noted, was “a challenge to western civilization.”  As Briefs explained in his book, The Proletariat (1937), whether a society can maintain itself with the vast majority of people cut off from participation in society by lack of capital ownership is a question that must be answered.
This is because, as commentators as far back as Aristotle have recognized, capital ownership vests human beings with a “social identity” by making all other rights effective.  Human beings are political animals, existing naturally in a state of society as persons.
A person is a human being “considered according to the rank he holds in society, with all the right to which the place he holds entitles him, and the duties which it imposes.”  (“Person,” Black’s Law Dictionary.) A human being without rights is not a person, because he has no social identity.
There is another word for human beings who do not have rights: slave.  Slavery is “that civil relation in which one man has absolute power over the life, fortune [property], and liberty of another.” (“Slavery,” ibid.)
Someone may be technically a person, for all human beings are “natural persons,” having been vested by God with natural rights.  Without private property in capital, however, a person has no effective means of exercising the natural rights of life and liberty.  He is, to all intents and purposes, a slave.  That is why Leo XIII declared,
[T]he hiring of labor and the conduct of trade are concentrated in the hands of comparatively few; so that a small number of very rich men have been able to lay upon the teeming masses of the laboring poor a yoke little better than that of slavery itself. (Rerum Novarum, § 3.)
#30#
Posted by Michael D. Greaney at 6:00 AM