The Wisdom of Social Justice

As we saw in the previous posting on this subject, given ordinary circumstances, moral questions tend to get away from the gray shadings and drift into black and white.  They never really get there, of course, but as a general rule, as Fulton Sheen was fond of saying, “Right is right if nobody does it, wrong is wrong if everybody does it.” 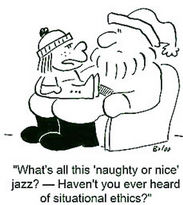 Admittedly, Father Ferree was a “little” unfair to Sheen.  In extenuation, Ferree was making a point and found it convenient to use a handy example that, taken out of context, illustrated that point very well.  The fact is that Sheen was absolutely right in saying that “Right is right if nobody does it, wrong is wrong if everybody does it.”  The point Sheen was making is that there are and will always be absolute standards of right and wrong, and circumstances cannot change the object morality of any wrong act.  Ethics are not situational.
The point Ferree was making, however, is that the situation is not hopeless.  The ethical businessman doesn’t have to face ruin for doing the right thing, or a stretch in Purgatory for doing what is legal but wrong.  Most moral questions are far from black and white, and determining not merely what is right in a particular situation, but what is best as well as right can be complicated.
Thus, what Father Ferree referred to was the whole paragraph from Divini Redemptoris in which Pius XI gave the solution, not just the problem:
It happens all too frequently, however, under the salary system, that individual employers are helpless to ensure justice unless, with a view to its practice, they organize institutions the object of which is to prevent competition incompatible with fair treatment for the workers. Where this is true, it is the duty of contractors and employers to support and promote such necessary organizations as normal instruments enabling them to fulfill their obligations of justice. But the laborers too must be mindful of their duty to love and deal fairly with their employers, and persuade themselves that there is no better means of safeguarding their own interests.  (Divini Redemptoris, § 53.)
In other words, and with all due respect to Fulton Sheen (who had most of the answer, just not enough of it — and, frankly, Sheen gave his radio talk before Divini Redemptoris was released . . . not even he knew the future!) the way to respond to and solve a social problem involving institutions is socially, by organizing and undertaking actions for the common good.
Yes, it is essential that people be virtuous as individuals, doing good and avoiding evil, but they must also organize and work on their institutions to ensure that the social environment is conducive to people being able to live virtuously — and that is what social justice is all about.
#30#
Posted by Michael D. Greaney at 6:00 AM