Although things often slow down as the holidays draw near and the end of the year approaches, people involved in the Just Third Way movement have been seeing a lot of action, so to speak.  A number of projects are coming to fruition, such as the prototype instructional video, some major publications, and a revived newsletter.  We’re also come across some interesting ideas that might be integrated into the Justice University project.  Then there’s the international and national scene:


• Stock Market Silliness.  The way the stock market is bouncing up and down, it’s as if people thought the secondary market in used debt and equity is somehow important to the primary market in actual people produce, consume, and live life.
• Close, But No Cigar.  This article, “A Better Way to Share the Wealth” by Joseph Blasi and Maureen Conway, accurately points out that the real problem is not the income gap, but the wealth gap underlying and causing the income gap.  Unfortunately, it tries to address the problem of how to get a better distribution of wealth by focusing on how to divvy up what already exists instead of making it possible for people to get their own.  Specifically, instead of looking at tax and monetary reform to make ownership of newly formed capital open to everyone, the article looks at tax reforms to encourage existing owners to give up their ownership.  Even in cases where both parties to the transaction benefit, there are some problems: 1) It only affects people who are employed by for-profit business entities.  2) It relies on existing owners choosing to give or sell productive assets to workers; it is no one’s right to obtain, even at a fair price, what belongs to someone else if the owner doesn’t want to sell or give it away.  3) It focuses on how people gain income instead of how people become productive.  Specifically, the authors propose the following: 1) Reward businesses that offer profit and equity shares.  Translation: the U.S. taxpayer picks up the tab.  2) Incentivize retirees to sell businesses to employees.  Translation: the U.S. taxpayer picks up the tab.  3) Promote public-private citizens trusts.  Translation: private property is abolished.  A much better and sustainable solution would be to open up access to money and credit so that every child, woman, and man can become productive through ownership of capital as well as through labor.  Something along the lines of Capital Homesteading should be considered. 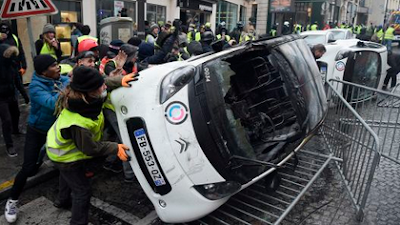 • “Yellow Vest” Crisis in France.  It’s tempting to say it’s déjà vu all over again as rioting continues in France.  This is actually nothing new: whenever economic conditions deteriorate, the French have a tendency to take to the barricades or the modern equivalent.  It almost always signals a fundamental change in government, and usually not for the better.  The Old Regime fell in this way, as did the Restoration, the July Monarchy, the Second Republic (indirectly; it’s complicated), and the Second Empire.  Only the First and Second World Wars and the Welfare State stopped the cycle, and then only for a time when it became obvious that the level of entitlements could not be sustained.  As a result, President Macron is fast losing what support he had, and the French can expect a brief Sixth Republic followed by some variety of Third Empire, although it would not be called that (although there is a group in Russia calling for Putin to become the Czar, so France just might end up with Napoleon IV, V, or XIV, if things follow the usual pattern.  Of course, if things don’t get out of hand too fast, Macron might have time to institute a Capital Homesteading program, or whatever name would be acceptable to his constituents.  This would not only help him out of a current difficulty but lay the foundation for a stable future for France. 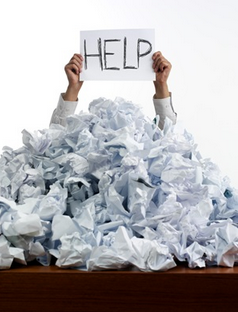 • Legislation By Judiciary.  Today’s Wall Street Journal it was reported that “The Supreme Court May Begin to Tame the Administrative State” (12/14/18, A-17).  Government agencies have gone mad with power (in a sense), creating a vast body of regulations that have the force of law but that Congress never had a say in.  The statistics are frightening, if you want a society in which ordinary people can understand and obey the law.  Even if the regulations were consistent, however (which they are not), no human being on Earth could ever grasp, much less understand 100,000 laws.  The irony is that people are looking to the Supreme Court to take away the legislative power assumed by government agencies . . . the same Supreme Court that has also usurped the power of Congress. . . .
• Targeting Private Schools.  Also in today’s Wall Street Journal is a piece on how New York State is requiring private schools “to offer a specific set of classes more comprehensive than what students in public schools must learn.” (“New York State Targets Jewish Schools,” WSJ, 12/14/18, A-15).  While the authors are rightly concerned about the effect on Yeshivas (Jewish religious schools), it is clear that all religious schools are being targeted.  This is consistent with Governor Cuomo’s comments about “extreme conservatives” not being welcome in New York state.  Not only Jews, but Catholics and the Amish have been singled out at various times by the champions of diversity in New York who want everyone to march to their drum.  Of course, it would be interesting to see just how long politicians like Cuomo and those controlling the New York State Education Department remain in office once people who are currently powerless or nearly so and dependent upon government largesse gain private property in capital and thus power to control their own lives. 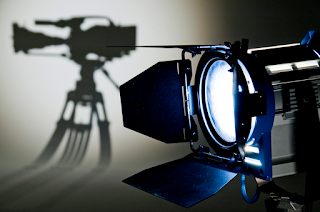 • Newsletter.  Work on the revived CESJ newsletter continues apace.  Shifting over to an electronic format and after such a long hiatus is more involved than we anticipated.  We still anticipate meeting the January deadline, however.
• CESJ Instructional Video.  Work proceeds as well on the prototype CESJ short instructional video.  Obviously we’re prejudiced, but we think it’s looking very good.
• Justice University Model?.  Recently we came across the Institute of Catholic Culture, an organization that offers free educational materials for those who register.  CESJ is not, of course, interested in the content, but in the format, which we plan on exploring to see if it has some good ideas for structuring an on-line educational system.  Plus, since the Just Third Way is in part based on the concepts of social justice developed by Pope Pius XI, there might be some useful material CESJ could use, or it might have something it could offer to the Institute, especially in the area of natural law.
• Shop online and support CESJ’s work! Did you know that by making your purchases through the Amazon Smile program, Amazon will make a contribution to CESJ? Here’s how: First, go to https://smile.amazon.com/.  Next, sign in to your Amazon account.  (If you don’t have an account with Amazon, you can create one by clicking on the tiny little link below the “Sign in using our secure server” button.)  Once you have signed into your account, you need to select CESJ as your charity — and you have to be careful to do it exactly this way: in the space provided for “Or select your own charitable organization” type “Center for Economic and Social Justice Arlington.”  If you type anything else, you will either get no results or more than you want to sift through.  Once you’ve typed (or copied and pasted) “Center for Economic and Social Justice Arlington” into the space provided, hit “Select” — and you will be taken to the Amazon shopping site, all ready to go.
• Blog Readership.  We have had visitors from 45 different countries and 46 states and provinces in the United States and Canada to this blog over the past week. Most visitors are from the United States, the United Kingdom, Latvia, Australia, and Canada.  The most popular postings this past week in descending order were “De Tocqueville’s ‘Wage Slavery in America’,” “Book Review: A Field Guide for the Hero’s Journey,” “Thomas Hobbes on Private Property,” “The Wisdom of Fulton Sheen,” and “News from the Network, Vol. 11, No. 49.”
Those are the happenings for this week, at least those that we know about.  If you have an accomplishment that you think should be listed, send us a note about it at mgreaney [at] cesj [dot] org, and we’ll see that it gets into the next “issue.”  If you have a short (250-400 word) comment on a specific posting, please enter your comments in the blog — do not send them to us to post for you.  All comments are moderated, so we’ll see it before it goes up.
#30#
Posted by Michael D. Greaney at 6:00 AM