Everybody knows about Puerto Rico, right?  It’s that place, that, you know, is “down there” somewhere, where a bunch of people live, who are, like, Americans, sort of, except they’re kinda like, you know, not really.  Is this going to be on the test?


Only the test of life.  Of course, the people of Puerto Rico shouldn’t be (too) insulted.  After all, most Americans can’t name the capital of Canada (it’s Ottawa) or even half the ten provinces or any one of the three territories (“Territories?  Canada has territories?”  “Yes, there is Yukon, Northwest, and . . . that other one . . . Nerfball?” [Okay, Nunavut, which nobody even in Canada can pronounce]).
So, the people of Puerto Rico can at least take some satisfaction in the fact that while most Americans don’t know too much (if anything) about the U.S. territories, they don’t even know that Canada has any at all.  The people of Guam, American Samoa, the United States Virgin Island, and the Northern Mariana Islands (got you on that one, didn’t we?) might be a little peeved, and justifiably so, but at least people are vaguely aware of them . . . not like the “Uninhabited Territories” of Bajo Nuevo Ban, Baker Island, Howland Island, Jarvis Island, Johnston Atoll, Kingman Reef, Midway Atoll (population 40), Navassa Island, Palmyra Atoll (population 20), Serranilla Bank, and Wake Island (population 150).  We don’t talk about Diego Garcia, which is allegedly British, anyway, although occupied by the U.S. under suspicious circumstances. 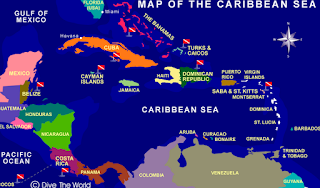 To get people up to speed on a rather important piece of real estate, then, the Commonwealth of Puerto Rico is an “unincorporated territory of the United States" strategically located at the opening of the Caribbean Sea, a thousand miles or so southeast of Miami, Florida.  It’s not just one island, but a number of them.  Probably best known today as a vacation spot for people around the world, it is ideally situated to be a commercial hub between North America, Central America, South America, and Africa.  Not so much Europe any more, but when the China trade came through New Spain (Mexico), Puerto Rico was also uniquely positioned for Europe and Asia as well.
So, what happened?  Long story short: Decline of the Spanish seaborne empire, Monroe Doctrine, Spanish American War, and so on.  Puerto Rico shifted from being a key player militarily and commercially, to being important militarily for a region not usually threatened by invasion any more.  It became a relative backwater when trade policies and regulations favored “real” U.S. locations and internal development pretty much disappeared.  As was the case with Ireland for so long, the country’s biggest export became people . . . not a good way to sustain an economy or encourage development.
Consequently, government programs were funded primarily with debt instead of tax revenues.  This is because if nothing is being produced locally, then consumption can only be financed by what other people produce somewhere else . . . and that means debt just keeps mounting.  By August 2017, Puerto Rico’s debt was a staggering $72 billion, and the poverty rate was an even more staggering 45%.
Then in September 2017 things got even worse when Hurricane Maria hit the archipelago, spreading devastation everywhere.  The electrical grid was almost completely destroyed, and what productive capacity still existed was almost totally wiped out.  With massive emigration, the population shrank by more than a tenth.  Aid efforts have been inadequate, to say the least.
Maybe it’s time to take another look at something that was proposed in the early 1970s, just before the initial enabling legislation for the Employee Stock Ownership Plan (ESOP) was passed.  Since both were proposed by Louis O. Kelso, and the ESOP has turned millions of workers into part owners of the companies that employ them without taking a cent of workers’ savings or reducing take-home pay, surely something can be done for Puerto Rico, and in a way that doesn’t cost the taxpayers a dime.
Not that there weren’t some significant weaknesses in what ended up being proposed for Puerto Rico (such as requiring investors to pony up their own money . . . which Kelso would NOT have said; we suspect somebody changed that or misunderstood that part, he advocated self-liquidating assets that pay for themselves so that the poor would benefit just as much as the rich), but it was a lot better than anything else and the system in place today.  As Juan M. Vasquez reported in the January 16, 1972 issue of the New York Times (page 29, if you’re interested), under the heading, “Stock Fund Sought to Aid Puerto Rico” —
SAN JUAN, P. R., Jan 15— Gov. Luis. A. Ferré proposed last night the creation of a public venture capital fund as a novel approach toward improving the island's sagging economy.  In his annual State of the Commonwealth message, the 68‐year‐old Governor described the Proprietary Fund for the Progress of Puerto Rico as an instrument “designed to attack, the deficiency of our present economic order.”  The plan seems to reflect the Governor's disenchantment with policies that have failed to cure Puerto Rico's persistent economic problems, such as an unemployment rate of nearly 13 percent and a rate of growth that has been slowed by the impact of the United States recession. . . . The plan is an attempt to put into practice, on a grand scale, the economic theories of Louis O. Kelso, a 58‐year‐old San Francisco lawyer and economist who is the co‐author of “The Capitalist Manifesto” and “The New Capitalists.” Mr. Kelso said at the briefing that a number of United States companies were at present trying the plan with their employees.
The good thing is that expanded ownership “technologies” have advanced greatly since Ferré announced his proposal.  It is now possible to make every child, woman, and man in Puerto Rico (or anywhere else, for that matter) into an owner of capital that does not merely supplement income but has the potential to become the main source of income in the event jobs become scarce or “real” wage rates fall relative to the increased cost of living.
In addition, where the original proposal required participants to put up their own money (out of a 13% unemployment rate in the 1970s or today’s 45% poverty rate?), it is possible today to help people purchase capital that pays for itself out of its own future earnings, and thereafter provides consumption income.  Ordinary people would not only participate in economic development by providing labor, but ownership as well, ensuring that all income adds to consumption power and thus the prospects for growth in which everyone participates.
If Congress was truly concerned about Puerto Rico, it would immediately put together an effort to study the application of the findings of President Reagan’s Presidential Task Force for Project Economic Justice back in 1986, which was expressly designed for Central America and the Caribbean Basin.  Copies of the Task Force Report were presented not only to President Reagan, but to Pope John Paul II.  Anyone concerned with truly helping the poor (actual people, not the abstract concept) cannot afford to ignore the potential of the Just Third Way to establish and maintain an economically just society in Puerto Rico — or anywhere else.
#30#
Posted by Michael D. Greaney at 6:00 AM