As the world attempts to move into Fall in the Northern Hemisphere and into Spring in the Southern Hemisphere, other things are staying pretty much the same.  That is, the powers-that-be can’t figure out that if you want economic recovery, a sound currency, and a just and sustainable economy, you’d better be able to make everybody productive, and that means expanded capital ownership:


• The Illusion of “Economic Recovery”.  In this past Tuesday’s Wall Street Journal, an article by Peter J. Ferrara, who teaches economics at the King’s College, opined on why the “Obama Recovery” took so long.  (“Why the “Obama Recovery” Took So Long,” WSJ, 09/11/18, A-15.)  Citing Milton Friedman’s observation that “[t]he deeper the recession, the stronger the recovery,” Ferrara gave what appeared to be damaging statistics about Obama’s policies versus those pursued by Trump.  Ferrara’s reason was that the Democrats simply couldn’t figure out an economic policy that creates jobs, fosters economic growth, and raises wages . . . which doesn’t actually say why.  The plain and simple fact is that the so-called recovery the economy is presumably enjoying right now is a bubble.  Massive issuances of government debt by all recent administrations have only fueled stock market speculation (which is NOT “growth”).  At the same time, consumer demand is being sustained by the highest levels of consumer debt in recent memory, again hardly something that can be considered “growth.”  The fact is, whether Democans and Republicrats, both parties have missed the obvious point that “job creation” and rising wages are in economic terms red herrings, false trails that lead you away from finding a real and sustainable plan for recovery.  To attain real economic growth and natural “job creation,” it is necessary to build sustainable consumer demand, and not by providing more ways for consumers to get into debt.  The historical fact is that only consumers who are productive can sustain consumption.  As human labor decreases in value relative to technology in the production process, consumers must supplement their production by means of labor with production by means of capital, and that can only be done legitimately by building ownership into every child, woman, and man.  And that can only be done by opening up access to the means of becoming owners so they can purchase capital on credit that pays for itself out of its own future earnings.
• Out of the Fire, Into the Frying Pan?  In an article somewhat related to the one noted above (everything is kind of related, but we thought we’d point it out), Mary Anastasia O’Grady (who is usually more sensible) had a column in Monday’s Wall Street Journal suggesting that Argentina switch to using the U.S. Dollar.  (“Argentina Needs to Dollarize,” WSJ, 09/10/18, A-15.)  No, what Argentina — and the U.S. — need to do is switch from using a debt-backed currency to using an asset-backed currency, which is what central banks were in part invented to do.  The fact that governments can back the currency with their own debt is the problem, not how much they issue.  Eventually the politicians will give in to the temptation to start bankrolling everything with debt instead of taxes, which means the sky is the limit for how much debt will be issued.  After all, when was the last time you heard of a politician who wanted less money to spend?  If new money is only created in a way that it is backed by private sector assets, there is a natural limit imposed on the amount of money that can be created, and avoids both inflation and deflation.  At the same time, if all new money is created in ways that turn people into owners of capital (i.e., that finance a program of widespread ownership), the consumer demand needed to sustain economic growth will be created naturally without having to force consumers to assume more and more debt. 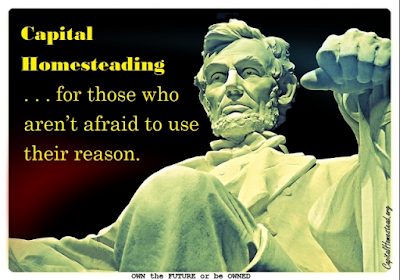 • “You Must Be Crazy” Department.  For a three-n-a-row roll, on Wednesday the Washington Post gave us the remarkable news that “U.S. Budget Deficit Swells as Economy is Humming” (09/12/18, A-1, A-15).  Noting that “typically, the deficit shrinks during strong economic times” . . . which to anyone except a Keynesian or a politician would suggest that what we are experiencing are not “strong economic times,” but a bubble economy fueled by (guess what) U.S. budget deficits!  Even worse, “there are signs the borrowing binge has only begun.”  Is it possible that no one in authority can see what is happening?  That unless drastic measures are implemented as soon as possible, the United States — and thus the world — is looking at an economic meltdown of epic proportions?  And what should be done?  First, reform the monetary system so that the banks and the Federal Reserve finance private sector development in ways that spread out capital ownership.  This will restore the tax base and have the potential to fund government operations.  Don’t use debt to finance government as the usual thing.  Ever.  Second, reform the tax system to restrict it to raising money to run government in the most efficient manner possible and favor widespread capital ownership.  Don’t use the tax system to finance economic growth.  Ever.  Third, restrict government borrowing to emergencies and never, never, ever issue bills of credit to monetize government deficits.  Ever.  And if you’re wondering how to go about it, take a look at Capital Homesteading.
• Shop online and support CESJ’s work! Did you know that by making your purchases through the Amazon Smile program, Amazon will make a contribution to CESJ? Here’s how: First, go to https://smile.amazon.com/.  Next, sign in to your Amazon account.  (If you don’t have an account with Amazon, you can create one by clicking on the tiny little link below the “Sign in using our secure server” button.)  Once you have signed into your account, you need to select CESJ as your charity — and you have to be careful to do it exactly this way: in the space provided for “Or select your own charitable organization” type “Center for Economic and Social Justice Arlington.”  If you type anything else, you will either get no results or more than you want to sift through.  Once you’ve typed (or copied and pasted) “Center for Economic and Social Justice Arlington” into the space provided, hit “Select” — and you will be taken to the Amazon shopping site, all ready to go.
• Blog Readership.  We have had visitors from 37 different countries and 40 states and provinces in the United States and Canada to this blog over the past week. Most visitors are from the United States, India, Canada, the Philippines, and New Zealand.  The most popular postings this past week in descending order were “ Time to Pay Attention to Puerto Rico,” “Thomas Hobbes on Private Property,” “A Brief Outline of Social Justice,” “News from the Network, Vol. 11, No. 36,” and “Social Justice in Action.”
Those are the happenings for this week, at least those that we know about.  If you have an accomplishment that you think should be listed, send us a note about it at mgreaney [at] cesj [dot] org, and we’ll see that it gets into the next “issue.”  If you have a short (250-400 word) comment on a specific posting, please enter your comments in the blog — do not send them to us to post for you.  All comments are moderated, so we’ll see it before it goes up.
#30#
Posted by Michael D. Greaney at 12:52 PM