Recently Alexis Tsipras, the Prime Minister of Greece, has declared the end of the bailout of the country, proclaiming a “day of liberation.”  Greece has completed a three-year emergency loan program worth €61.9 billion to tackle its debt crisis.  It was part of the biggest bailout in history, totaling approximately €289 billion, which will take the country decades to repay.  Cuts in public spending, especially for social welfare programs, will continue.


Repayment will be made all the more difficult by the fact that the country will continue borrowing, although at “market rates,” and the fact that the economy (such as it is) is 25% smaller than it was before the debt crisis began.  According to the International Monetary Fund (IMF), only four countries have shrunk economically more than Greece in the past decade: Yemen, Libya, Venezuela, and Equatorial Guinea.
It is correct in a sense to say that Greece is now “liberated” . . . but from what, exactly, is not entirely clear.  Debt is still nearly 200% of GDP and the underlying problems that caused the need for the bailout in the first place have not been resolved.
Still, people are angry.  Not only has social welfare been cut, jobs have disappeared.  People see no way to make a living.  They don’t see the crisis coming to an end; as far as most people are concerned, it’s all on paper.  People had grown accustomed to government benefits of the modern Welfare State and didn’t ask too many questions about where the money was coming from until everything came crashing down.
The chief problem is the fact that consumption for the average Greek far exceeded production for the average Greek, and the slack has to be made up somewhere.  As might be expected, that “somewhere” has been government debt, just as it has for almost every country on earth.
In a collective sense, this doesn’t make any difference.  Keynesian economics is built solidly on the assumption that there is no difference between the individual human person and the collective.
As far as actual human beings are concerned, however, it makes a great deal of difference.  If Person A produces twice what he consumes, and Person B doesn’t produce anything, collectively there is enough to go around.  In the real world where actual people live, Person A can have all he wants and set aside something for tomorrow.  After all, Person A produced it, so Person A owns it and can do with it what he likes.
As for Person B, he can go take a hike . . . unless Person A feels charitable or the government steps in and takes Person A’s presumed surplus and gives it to Person B.  Of course, if the government does that, then Person A might decide not to produce that surplus for Person B’s benefit instead of his own, unless the government figures out a way to take from Person A to give to Person B without Person A catching on, at least too quickly.
Unfortunately, the Person As in the Greek economy caught on, and stopped producing, leaving the Person Bs hanging out to dry. 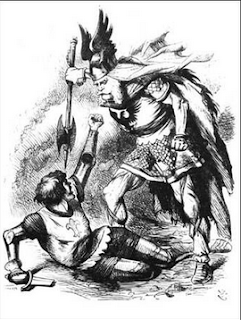 Of course, the real solution is to make Person B as well as Person A productive so that each produces for himself.  Given the power of the ordinary person to be productive, it’s astonishing how productive they can be.
For example, in France following the Franco-Prussian War the country produced its head off and paid off an indemnity specifically intended to destroy France economically forever in less than three years.  Of course, ownership of the means of production in France was broadly owned so that ordinary people could be productive.
If Greece instituted something along the lines of a Capital Homestead Act and put forth a comprehensive national effort to retire the debt — an all-out “war on debt” — it is entirely possible that the economy would be on a sound footing within three to seven years, and the debt be repaid without austerity in less than a century (with a great deal of pain, give it a generation, say less than a quarter of a century).
It's at least something to think about.
#30#
Posted by Michael D. Greaney at 6:00 AM