American type liberalism, however, asserts that every single human being, every child, every woman, every man, is sovereign, i.e., has rights by nature that can never be taken away, nor even the exercise thereof limited except by duly constituted authority after due process, or there is clear and present danger to one’s self, other individuals or groups, or the common good as a whole.  That is the theory.  We will now point out how wrong we are . . . in practice.
And how wrong are we, at least in practice?  To answer that, we ask, How wrong is slavery . . . in practice? 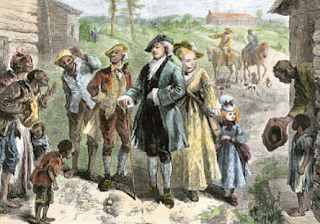 The basic theory of American type liberalism is that every human being is sovereign, and is thus a “natural person,” having inherent rights of life, liberty, and private property.  The basic practice, however, was that chattel slavery was widespread in the American colonies, and a slave is a human being without rights.  A slave therefore has no right to life, liberty, or private property.  Instead, it — slaves are things, not persons — is an owned thing, and utterly under the control of its owner.  And that, to put it mildly, inserted a fundamental contradiction into American political philosophy.
As we saw in the previous posting on this subject, America’s “Founding Fathers” (and probably the Mothers and Children as well. . . .) derived their political philosophy from Robert Cardinal Bellarmine.  Most of them, however, appear to have done so “second hand,” filtered through the responses of John Locke and Algernon Sidney to the “divine right” theories of Sir Robert Filmer, chief theologian and advisor to James I/VI of England/Scotland.
The exception was George Mason, who may have read Bellarmine in the original.  A punctilious scholar, Mason might have been led to investigate Bellarmine’s writings directly as a result of the somewhat contradictory references to him in Locke (who disparaged him) and Sidney (who praised him).  Copies of Bellarmine’s works were known to exist in Northern Virginia, and Mason as a prominent community leader would have had no problem borrowing them.
The significance of this is that Locke and Sidney were firm adherents of the “state of nature” theory, virtually their sole point of agreement with Thomas Hobbes.  That is, man in a state of nature has all rights, and surrenders some of them on agreeing to enter society in exchange for safety and protection of property.
That man is naturally a member of society, however, is found throughout Bellarmine’s writings, notably in De Laicis, his treatise on civil government.  No one loses or surrenders rights when agreeing to enter society because human beings are naturally members of society and thus natural persons.
Unless you happened to be a slave, this was not a serious problem until May of 1776 when Mason was asked to draft a declaration of rights for the Virginia Convention to justify the American Revolution.  Mason, however, was something that people today regard as a paradox, a slave owner who hated slavery, and who spoke out against it on every possible occasion.
Now, we can either dismiss Mason as a hypocritical windbag right now, or give not a justification, but a brief explanation, and get on with the story.  We’ll do the latter.
Slavery was legal, and Mason in common with most slaveowners inherited both the fact of slavery and slaves.  Whether or not he treated them well is not the issue here, although by all accounts Mason treated his slaves better than most workmen treated their nominally free apprentices . . . which was why when socialism came along later, it found a welcome among apprentices in the northern cities, especially Philadelphia.
Be that as it may, the economic arrangement in the colonies resulted in the fact that, in general, employers who relied on free wage labor simply could not compete economically with masters who relied on slave labor.  This was also one reason why slaveowners preferred black slaves who were slaves for life unless manumitted (which was both difficult to do and dangerous for the former slave, who could be kidnapped back into slavery into a much worse situation) to white convicts sentenced to penal servitude for a period of years.  After all, once a white slave’s sentence was up, he or she was free, and the former master lost his investment.  Plus, it was much, much easier for a white slave to escape and take up a new life elsewhere free from fear of being captured and taken back into slavery.
The bottom line was that abolition of slavery would not be effective if it was partial.  Either all slaves had to be freed, or none, or those owners who freed their slaves faced utter ruin as they would not be able to replace slaves with free labor and remain competitive with those who did not free their slaves.  So, when the other delegates saw how Mason opened his draft of the Virginia Declaration of Rights, some of them went through the roof:
That all men are by nature equally free and independent, and have certain inherent rights, of which they cannot, by any compact, deprive or divest their posterity; namely, the enjoyment of life and liberty, with the means of acquiring and possessing property, and pursuing and obtaining happiness and safety.
Some of the more conservative members of the Virginia Convention were, frankly, ready and waiting for Mason to do exactly as he did: insert language undermining the legal basis for human chattel slavery.  If Mason’s language was allowed to stand unaltered, it endangered the economic wellbeing and security of most of the men in the Convention . . . the very people essential to making the American Revolution a success.
Mason’s implicit argument was that if all men — meaning all human beings — are naturally members of society, regardless of circumstances, it logically follows that this applies to slaves. The clear implication is that slaves — absent conviction of a crime for which the slave is actually and personally guilty — have the natural right to be free.
And that set up a contradiction. . . .
#30#
Posted by Michael D. Greaney at 6:00 AM