The Economic and Financial Revolution

The situation between John Henry Newman and Orestes Brownson described in the previous posting on this subject had not sprung from out of nowhere.  Nor were they the only ones confronted with what looked like an attack on the very fabric of the social order itself. 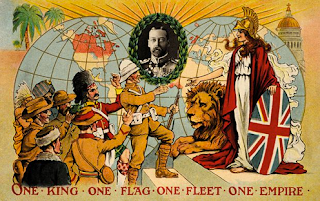 Not surprisingly, it was at this time that the British Empire began its rapid expansion.  As Great Britain turned into an economic powerhouse and ordinary people lost production power and thus consumption power, the Empire had to expand in order to open up new markets to absorb all the goods and services being produced.
With a deteriorating tax base, the government began backing new money with debt.  This was an expedient that had first been used on a large scale in the late seventeenth century as soon as the invention of central banking made it possible to back new money with government bills of credit.  It had then been used to finance the war against Napoléon in the late eighteenth and early nineteenth centuries.
Of course, the government-induced inflation meant that prices started going up, which put upward pressure on wages, making it more profitable for manufacturers to replace more human labor with machinery.  This only made the problem worse, as more and more people were faced with inadequate or zero income at a time when inflation was destroying the value of the currency and driving prices ever higher in real terms.
The situation was ripe for the growth of something like socialism to replace existing political and religious institutions — and that is precisely what happened.
#30#
Posted by Michael D. Greaney at 6:00 AM