We’ve been looking at Woodrow Wilson and his role in eliminating the vestiges of what was once known as “Lincoln Republicanism,” i.e., a political philosophy that viewed government as being of the people, by the people, and for the people.  The Progressive Party was pretty much the last gasp of the type of Republicanism that replaced the Whig Party and ran Abraham Lincoln for president back in the day. 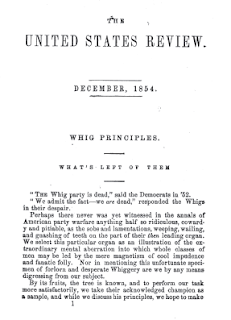 Underscoring this, we recently came across an article from December 1854 in a Democratic Party journal, The United States Review, “Whig Principles: What’s Left of Them.”  It was clear that the Whig Party was on the skids and the only way to go was down further.  There was no disagreement on that point among either Whigs or Democrats.  The Democrats were a trifle snarky about how they said it, but the fact itself was beyond dispute.
The problem came in with what they viewed as the causes of the Whig downfall.  The article listed eight:
·      Protectionism
·      Socialism
·      Prohibition
·      Vegetarianism
·      Woman’s Rights
·      Spiritualism
·      Abolition of Black Slavery [emphasis in original]
·      Isms in General
Of these alleged causes of the downfall of the Whigs, the only substantive ones were protectionism and abolition of slavery.  The others were straw men intended to make the Whig stand on the abolition of slavery look as ridiculous as socialism, prohibition, vegetarianism, women’s rights, and spiritualism allegedly were.  The fact that these things were not really Whig political doctrines, and that at least as many Democrats held the same or similar opinions, was conveniently ignored. 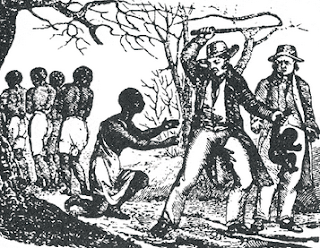