A New, Anti-Human Role for the State

In the previous posting on this subject, we examined Woodrow Wilson’s philosophy of government.  We decided (we don’t know what you decided) that Wilson’s approach to government was not exactly respectful of the human person, dignity, and all that.


Wilson’s snobbery, however, was the arrogance of the intellectual and financial élite, not the social and political élite. To Wilson, as to Walter Bagehot, the academic and financial élite were the “real” rulers of the country. Wilson despised the social and political élite as much as he detested “common” people.
Perhaps this was why Wilson seemed intent on ruining America’s relations with Mexico, the country’s neighbor to the south. In his book, Blood-Drenched Altars (1935), Bishop Francis Clement Kelley (1870-1948) observed that Wilson seemed to have a positive knack for putting Mexican leaders in difficult positions. Kelley claimed that a letter from Wilson over Bryan’s signature was responsible for the assassination of Venustiano Carranza de la Garza (1859-1920) after Wilson maneuvered Carranza into becoming president.
Bryan and Wilson also refused to lend U.S. support to the Catholic effort to repeal the Mexican “Reform Laws” of the 1850s. These laws resulted in the confiscation of Church property and put the Church directly under the control of the State, to say nothing of condoning the wholesale murders of Catholic clergy and religious
Bryan’s and Wilson’s objection was on the grounds that separation of Church and State must be preserved.  It is not entirely clear, however, that Bryan understood or appreciated the repressive nature of the “separation” that the Reform Laws imposed; he seems to have had something of a blind spot in that regard.
Bryan had been criticized years earlier for his friendliness toward Mexico and Mexicans (Boston Evening Transcript, Monday, December 29, 1902, 8), and made no mention of the dismissal of the effort to repeal the Reform Laws in his memoirs, although noting as a great achievement measures that he considered beneficial to Mexico and the relationship between the two countries. In this instance Wilson may have overruled Bryan’s judgment. It is certain that Wilson’s insistence on taking a hard line with Germany over the sinking of the Lusitania over Bryan’s objections led to Bryan’s resignation on June 9, 1915.
In any event, Kelley wrote a detailed letter explaining the Mexican situation to Bryan, and Bryan commented,
Father Kelley’s letter is on the whole quite moderate I think, but there is one proposition in it which would seem to be untenable, namely, that the revolutionists should be asked to repeal the laws which they have there on the separation of church and state.
That the Catholic hierarchy would even make an effort to interfere in matters of state in such a fashion outraged Wilson. He was tempted to punish the Church. As reported by Edward Mandell House in his diary, “The President was very firm in his determination to strike the Catholics a public blow, provided they carried their arrogance too far.” Wilson seems to have thought better of it, however, possibly not wanting to alienate Mexicans’ co-religionists north of the border, who had always been a mainstay of the Democratic Party.
Unfortunately for the leader of a country that was not only confronted with a turning point in its own history but was poised to become a major player on the world scene, Wilson combined elitist arrogance with an essentially weak and vacillating character. He seemed to feel that he was a natural leader because of his scholarly attainments and his position, regardless what he might do (or not do) with either.
The problem was, in common with many politicians today, Wilson tried to command and order, rather than to persuade and lead, when he lacked the ability or the will to do either. This would cause Wilson to fail spectacularly at the Versailles peace talks at the end of the First World War, when more able and, yes, tougher leaders simply ignored him and his “Fourteen Points.” It also seriously hampered the reform effort that he had promised to undertake as soon as he took office in 1913.
More immediately, Wilson’s fixed belief in the superiority of the “better” sort of people, meaning the economic and academic élite whom he considered the real rulers of the country, led him to try and delay and change the reform program that had gotten him elected. Nowhere was this more evident than with his interference in and foot-dragging with respect to the reform of the financial system.
Wilson virtually personified the dangers the progressives had seen threatening the country: disappearance of opportunity, rule by an economic élite, the great mass of people left powerless at the mercy of an all-powerful State on which they depended for everything — the list is long, too long to give here.
Matters had been building up to this for some time, since at least before the Civil War, in fact. This was seen in the new view of sovereignty and the role of the State implicit in Scott v. Sandford in 1857. Wilson’s election, however, institutionalized social, economic, and what might be called “political” positivism in the U.S. government. Not surprisingly, this paralleled the growth and spread of religious positivism, “modernism,” in the Catholic Church, along with socialism and “New Age” thought. 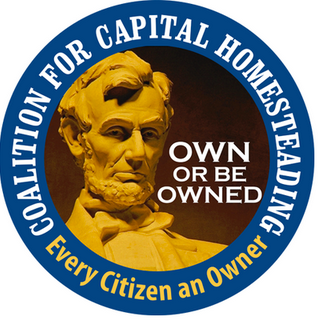 There was, however, one chance that the trend could be reversed. A reform of the financial system that broke the virtual monopoly the economic élite enjoyed over money and credit would at least keep open the door to opportunity by emancipating economic growth from the slavery of past savings — and thus dethrone the fixed belief that “the rich” are essential to a free market and democracy.
In and of itself, of course, such a reform would not restore democratic access to the means of acquiring and possessing private property in capital. It would, however, ensure that the mechanism existed, much as the landed frontier existed before the Homestead Act. A “Capital Homestead Act” duplicating the success of the land-based Homestead Act is, in fact, not possible without a reform of the financial system — and the powers-that-be exerted all their efforts to ensure that the reform either would not take place, or would take place only on their terms.
But that is a story for another day.
#30#