It appears that April Showers are bringing forth flowers of hope for the Just Third Way.  A number of initiatives appear to be getting a little traction around the world, from the state of Michigan to the country of Poland.  In addition, research into the roots of today’s problems is revealing some surprising things that bode well to shake up what “everybody knows” about the history of the nineteenth century, especially the development of socialism:


• Wayne County, Michigan Initiative.  A CESJ team is heading out today to Wayne County, Michigan, which includes the city of Detroit.  Local political leader Chris Dardzinski has assembled a group of concerned community leaders interested in hearing about an alternative to “the same old thing.”  Due to many factors, Detroit and Wayne County may be a perfect place to implement a Just Third Way “pilot program.”.
• Interest from Poland and Ukraine.  Earlier today we heard from a correspondent in Poland who is interested in a program similar to that being proposed for Wayne County (above).  The CESJ core group has had one very fruitful discussion with the correspondent’s team, and is looking forward to another one in the next week or so.  Our correspondent also commented briefly on the push for the “Universal Basic Income” (below).
• Universal Basic Income.  Rowland B. of the CESJ core group sent a link to a New York Times article on the Finnish experiment with a Universal Basic Income, “Finland Has Second Thoughts About Giving Money to Jobless People,” 04/24/2018.  As the article explains, “The Finnish government has opted not to continue financing it past this year, a reflection of public discomfort with the idea of dispensing government largess free of requirements that its recipients seek work.”  Interestingly, despite the proven feasibility of widespread ownership both in securing an adequate income and motivating people to be productive, no one in power (at least no one of which we are aware), seems to be considering the potential of a “universal basic ownership stake” that is self-financing and thus not only decreases government expenditures for welfare and entitlements, it increases the tax base at the same time.
• The “Monkey Selfie” Controversy.  Recently, People for the Ethical Treatment of Animals (PETA) filed a lawsuit on behalf of a monkey that used a camera to take photographs of itself, arguing that the rights to the photograph and all profits belonged to the monkey.  The court ruled that the photos were in public domain, whereupon the Wall Street Journal opined regarding the property rights of computers that are programed to create works of art or literature.  Oddly, no one seemed to consider the rights of the owners of the cameras or computers, who under the traditional rights of private property are entitled to the fruits of ownership, viz., control and income.  After all, the monkey used a camera belonging to someone/thing else without offering compensation, while computers just don’t suddenly decide to produce poetry or paintings; they have to be programmed to do so by their owners or their owners’ agents.  After all, if Person A goes in to Person B’s house and prepares a meal using A’s food and equipment, who has a right to that meal?  Of course, to answer that you have to know whether B was invited to prepare and eat the meal, just prepare it, or came in uninvited, and so on.  In the monkey copyright case, the intent of the owner of the camera was that a monkey would use the camera to produce photos for the benefit of the owner.  If by some stretch there was a contract with the monkey, the consideration that induced the monkey to enter into the presumed contract was the fun of messing with the camera.  The photos should, therefore, belong to the owner of the camera. 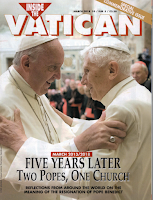 • Inside the Vatican Article.  “Dignity of the Human Person Under God,” an article by Michael D. Greaney, CESJ’s Director of Research, was published in a special commemorative issue of Inside the Vatican magazine to honor Pope Emeritus Benedict XVI.  A number of people have commented favorably on the article, which gives a succinct outline of the Just Third Way and its common basis with Catholic social teaching, both of which are based on Aristotelian-Thomist natural law theory.  We understand (meaning we don’t know) that single copies of the magazine, the March 2018 issue) might be obtainable from Urbi et Orbi Communications.
• Fr. Isaac Hecker Articles.  We recently surfaced a series of articles written in the late 1880s by Father Isaac Hecker, renowned as founder of the “Paulist” order and an associate of the noted Catholic commentator and fellow convert, Orestes A. Brownson, who is buried in the crypt in Sacred Heart Basilica at the University of Notre Dame.  The articles, which appeared in The Catholic World magazine, an important journal in the nineteenth century, appear to have been written during the controversies stirred up by the agrarian socialist Henry George and his “Neo-Catholic” associate Father Edward McGlynn to reassure people that neither Neo-Catholicism nor socialism were in any way to be considered as “authentic” Catholic teaching.  As a former socialist and “New Christian” himself, Father Hecker was very well qualified to comment on the subject and warn of the dangers represented by socialism and esoteric (“New Age”) thought.
• “Lacordaire on Property”. An additional bonus found among back issues of The Catholic World was an article titled “Lacordaire on Property,” that also seems to have been written to warn people about the dangers represented by George and McGlynn.  This is significant, as Father Jean-Baptiste Henri Dominique Lacordaire, O.P., was an associate of the abbé Hugues-Félicité Robert de Lamennais, considered the leading proponent of Neo-Catholicism and the founder of “social Catholicism.”  When de Lamennais rejected his priesthood and repudiated Christianity to found his own religion and promote socialism, Lacordaire cut the connection immediately, abandoned all socialist interpretations of Catholic doctrine, and became one of the leading figures in reviving Catholic education and restoring the Dominican Order to France.  Interestingly, Pope Gregory XVI used the term “rerum novarum” in Singulari Nos (1834) to describe the errors of de Lamennais.  Half a century or so later Pope Leo XIII referred back to Gregory’s efforts to counter socialism, modernism, and the New Age in his 1891 encyclical, Rerum Novarum.
• Shop online and support CESJ’s work! Did you know that by making your purchases through the Amazon Smile program, Amazon will make a contribution to CESJ? Here’s how: First, go to https://smile.amazon.com/.  Next, sign in to your Amazon account.  (If you don’t have an account with Amazon, you can create one by clicking on the tiny little link below the “Sign in using our secure server” button.)  Once you have signed into your account, you need to select CESJ as your charity — and you have to be careful to do it exactly this way: in the space provided for “Or select your own charitable organization” type “Center for Economic and Social Justice Arlington.”  If you type anything else, you will either get no results or more than you want to sift through.  Once you’ve typed (or copied and pasted) “Center for Economic and Social Justice Arlington” into the space provided, hit “Select” — and you will be taken to the Amazon shopping site, all ready to go.
• Blog Readership.  We have had visitors from 29 different countries and 39 states and provinces in the United States and Canada to this blog over the past week. Most visitors are from the United States, Canada, India, United Arab Emirates, and the United Kingdom.  The most popular postings this past week in descending order were, “Is Theft Ever Justified?” “Thomas Hobbes on Private Property,” “7. The Social Doctrine of John Paul I,” “Capitalism v. Socialism? Justice v. Charity?” and “News from the Network, Vol. 11, No. 16.”
Those are the happenings for this week, at least those that we know about.  If you have an accomplishment that you think should be listed, send us a note about it at mgreaney [at] cesj [dot] org, and we’ll see that it gets into the next “issue.”  If you have a short (250-400 word) comment on a specific posting, please enter your comments in the blog — do not send them to us to post for you.  All comments are moderated, so we’ll see it before it goes up.
#30#
Posted by Michael D. Greaney at 4:08 PM