While the winter is cold, the Just Third Way literary scene seems to be pretty hot.  There is fresh interest in Capital Homesteading for Every Citizen (2004) and Dr. Harold G. Moulton’s classic refutation of the monetary policies behind the Keynesian New Deal, The Formation of Capital (1935).  Most of the stir, however, is caused by a number of important new books that have come out or are in the process of being published:


• “Church and Culture” Radio Interview.  The Ave Maria Radio Network, an affiliate of EWTN, will broadcast a prerecorded interview with CESJ’s Director of Research, Michael D. Greaney on Ten Battles Every Catholic Should Know on the “Church and Culture” show with your host Dr. Deal Hudson.  The interview will air Saturday, February 10, 2018 at 3:00 pm EST and Sunday, February 11, 2018 at 7:00 am EST in the U.S.  To locate a station that carries the show in your area in the United States, follow this link.  Dr. Hudson worked with the “Great Books” philosopher Mortimer Adler, best known in Just Third Way circles as co-author with Louis O. Kelso of The Capitalist Manifesto (1958) and The New Capitalists (1961), and is himself an author, with nearly a dozen books to his credit.  Amazon has rated Ten Battles Every Catholic Should Know as the Number 1 Recent Release in the history of Islam, and the Number 1 Recent Release in Turkish history.

• ESOP Tax Changes.  A few tax changes are coming down the pike for some ESOPs.  The most significant one, according to the January-February 2018 Employee Ownership Report of the National Center for Employee Ownership, is the limitation of the tax deduction for C-Corp ESOPs to 30% of Earnings Before Interest, Taxes, Depreciation, and Amortization (“EBITDA”) for the first four years of an acquisition loan, and to 30% of Earnings Before Interest and Taxes (“EBIT”).  Details are still being worked out regarding implementation and application of the new provisions.  S-Corp ESOPs, of course, are exempt from these provisions if the ESOP trust owns 100% of the outstanding shares of the company.  These changes would not be an issue, of course, if all dividends were tax deductible, making it advantageous for a company to pay out all its earnings to the shareholders — who have a natural right to the income generated by what they own! — and finance future growth out of “future savings” as Kelso and Adler recommended in The Capitalist Manifesto and The New Capitalists.  It would be even more advantageous to enact a Capital Homestead Act and make it possible for every child, woman, and man to become an owner of capital on the same terms as the rich. 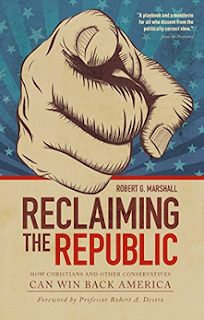 • Robert Marshall’s New Book.  Robert G. (Bob) Marshall’s soon-to-be-released (February 20, 2018) new book, Reclaiming the Republic from TAN Books, an imprint of St. Benedict Press, is now available for preorder.  Bob had a long and distinguished record of service to his constituents in Virginia and beyond. First elected to the Virginia House of Delegates in 1991, he has been a consistent voice for traditional values and constitutional government.  He has appeared on numerous national radio and television programs commenting on public policies.  One of those comments was an endorsement of the Just Third Way, which we hope has a central place in Bob’s recommendations on how ordinary Americans can “win back America” as the cover declares: “I appreciate your efforts educating to empower the family economically. Your work inspires, encourages, and builds up the whole community, the nation, the world. . . . Please send me the packet on the [Capital] Homestead Act. I will assist you in every way that I can.”
• Red Star Over Bethlehem.  Work continues on preparing Red Star Over Bethlehem: What Happened to Social Justice (working title . . . meaning we’re still working on getting the title exactly right) for publication.  We are seeing increasing signs not only that the world is ready for this book (as well as its projected sequels, Money, Power, and Justice and The Just Third Way), but that it needs the correct understanding of social justice the book offers along with what happened to hijack the concept.
• Shop online and support CESJ’s work! Did you know that by making your purchases through the Amazon Smile program, Amazon will make a contribution to CESJ? Here’s how: First, go to https://smile.amazon.com/.  Next, sign in to your Amazon account.  (If you don’t have an account with Amazon, you can create one by clicking on the tiny little link below the “Sign in using our secure server” button.)  Once you have signed into your account, you need to select CESJ as your charity — and you have to be careful to do it exactly this way: in the space provided for “Or select your own charitable organization” type “Center for Economic and Social Justice Arlington.”  If you type anything else, you will either get no results or more than you want to sift through.  Once you’ve typed (or copied and pasted) “Center for Economic and Social Justice Arlington” into the space provided, hit “Select” — and you will be taken to the Amazon shopping site, all ready to go.
• Blog Readership.  We have had visitors from 37 different countries and 49 states and provinces in the United States and Canada to this blog over the past week. Most visitors are from the United States, Canada, India, the United Kingdom, and Peru.  The most popular postings this past week in descending order were, “The Growing Romish Menace,” “Socialist Delusions, Capitalist Illusions, IV: The State from Which All Blessings Flow?” “Thomas Hobbes on Private Property,” “News from the Network, Vol. 11, No. 5,” and “The Death of Reason, V: Swill Stroganoff.”
Those are the happenings for this week, at least those that we know about.  If you have an accomplishment that you think should be listed, send us a note about it at mgreaney [at] cesj [dot] org, and we’ll see that it gets into the next “issue.”  If you have a short (250-400 word) comment on a specific posting, please enter your comments in the blog — do not send them to us to post for you.  All comments are moderated, so we’ll see it before it goes up.
#30#
Posted by Michael D. Greaney at 8:44 AM