We realize that on this particular (Saint) Valentine’s Day we’re supposed to wail and moan the fact that it falls by coincidence on “Ash Wednesday,” which many Christians observe as the start of Lent and is therefore a day of “fast and abstinence.”  That means no chocolate or other goodies for your sweetie.


And that’s the way some rather pedestrian preachers of religion have put it.  Instead of trying to tie together the “real” meaning of (Saint) Valentine’s Day and Ash Wednesday — which shouldn’t be too hard for a day honoring a Christian martyr and a day beginning a season of sacrifice — the idea seems to be that all the people who make a point of strengthening and working on their relationships on (Saint) Valentine’s Day somehow got cheated this year.
Instead of emphasizing the fact that all relationships take work and sacrifice, but it should never be a burden, many ministers laid it on pretty thick that, bummer, you don’t get any candy this year.  Instead, you get double the trouble instead of twice the fun — yes, work and sacrifice can be fun if done in the right spirit instead of being looked on as a punishment . . . which is the way it seems to have been “sold” this year.
That being the case, it’s up to us to take up the slack and give everybody, both “pro-choice” and “pro-life” a valentine this year, one that will take a lot of work to enjoy, but will be well worth it: a pro-life economic agenda, that also addresses the stated concerns of the pro-choice position.

These latter are well-presented in a recent article, “The Christian Who Cried Abortion,” from The Huffington Post of February 11, 2018.  Briefly, the author of the article claims that pro-life Christians (evidently other pro-lifers either don’t exist or don’t matter . . . which no doubt comes as a surprise to atheists, agnostics, Jews, Muslims, Hindus, Buddhists, and millions of other people) care only about stopping abortion, not in a “quality” life for people once they’re born.
Both claims are demonstrably untrue.  We won’t waste any time proving that the pro-life movement is not a “Christian” thing as that term is generally meant.  Nor a “religious” thing (ditto).  It’s a glib fallacy that a large number of Christians have unfortunately bought into, making others feel not merely unwelcome in “their” “Christian” “Crusade” to “end abortion.”  It’s been extremely effective in dividing people who should be strong allies, and in diverting people away from the main issue — the sacredness of human life (another pro-choice victory: equating “sacred” exclusively with religion) — and to fighting endlessly over differences having nothing to do with protecting fundamental, natural rights to life, liberty, and private property.
No, our focus today is the pro-life movement, not the anti-abortion movement (getting that label into the media is another pro-choice triumph . . . as is “pro-choice” itself, which doesn’t mean what it sounds like).  The author of the article broadly claims that the “typical” pro-life activist cares nothing about people once they are born, and is in fact anti-life for “typically” promoting conservative political values and causes instead of liberal ones, and that this is hypocritical, implying a moral equivalence between being in favor of executing a duly convicted serial rapist cannibal who tortured his victims before eating them, and not increasing welfare benefits. 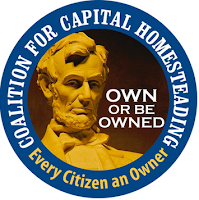 We didn’t say the article was logical, consistent, or even believable once you get past the glib phrases and knee-jerk thinking.
Anyway, the problem is that there is a germ of truth in the author’s contentions.  Only a germ, mind you, but it’s enough to give the piece a certain plausibility in many quarters, especially these days when so few people have learned to think.  There are people in the pro-life movement — and they tend to be the loudest and most obnoxious ones (what, you think that being pro-life qualifies you for instant canonization?) — who rant that ending abortion is the only thing that matters.  Period.
We won’t go into that, either.  We’ve completed the draft of a 150,000-word book that addresses in part that sort of mindset, and it’s currently in editing.

No, what we’re looking at today is an economic agenda for the pro-life movement, one that addresses the material needs of every child, woman, and man from conception to natural death.  We believe that “Capital Homesteading,” an application of the principles of the Just Third Way, fills the bill.
Admittedly, we can’t do more in a brief blog posting than introduce the idea, but that is all we really need to refute the claim that a pro-life movement is necessarily restricted to being anti-abortion.  In fact, if that’s all the pro-life movement is, then it’s a failure, as the author of the article does more than hint.
So, what is “Capital Homesteading”?
Capital Homesteading is intended to be a comprehensive legislative program of Kelsonian tax, monetary, and fiscal reforms to make every child, woman, and man a direct owner of a piece of the industrial and commercial frontier.  It is designed to connect every person to the global economy as a fully empowered participant and owner of new technologies, by dismantling structural barriers in our basic institutions and financing capital formation through ownership democratization vehicles. 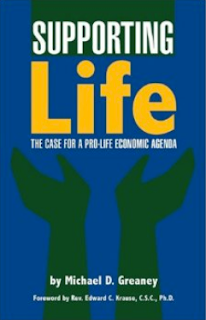 This economic agenda for the twenty-first Century provides a blueprint for leaders committed to restructuring the legal and financial system to grow an economy at maximum rates with no inflation, in ways that build a Just Third Way version of economic democracy as the essential foundation for effective political democracy.
Capital Homesteading offers a private property and free market-oriented alternative for saving the social safety nets and supporting programs securing retirement income.  At the same time, Capital Homesteading offers a new national policy to foster life-long “capital self-sufficiency” as a means of achieving true economic independence for every individual in any country that adopts it or a similar program based on the same principles. If implemented, capital ownership would be systematically de-concentrated and made directly accessible to every person, without redistribution or reducing existing property rights of the wealthy.
Obviously, this brief posting cannot make a complete case for a pro-life economic agenda, any more than it can describe in more than broad terms the agenda itself.  More detail on Capital Homesteading can found in Capital Homesteading for Every Citizen (2004), while the case for having an agenda in the first place can be found in the pamphlet, Supporting Life: The Case for a Pro-Life Economic Agenda (2010).
Happy (Saint) Valentine’s Day, and an Awesome Ash Wednesday.
#30#
Posted by Michael D. Greaney at 6:00 AM