The Gold Standard? Which One?

A number of people believe that all of our financial and monetary problems — and economic ones as well — would be solved if we just went back to “the gold standard.”  Some people dismiss this as sheer fiscal romanticism, while others think it’s the only way to go.  There’s enough truth in either extreme to make both positions plausible . . . as long as someone doesn’t understand money, credit, banking, and finance.


We can think of at least four definitions of “gold standard”: 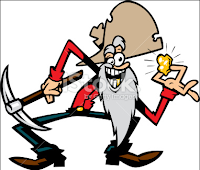 1) Gold is the only legal currency.  All transactions must be carried out and all contracts fulfilled using gold and only gold.  This is obviously ludicrous, as there is not enough gold in the world to serve as the universal medium of exchange.  If there were that much gold, it would have so little value that it would be worthless as money.  (This, by the way, is also the chief problem with “Modern Monetary Theory,” that posits only government bills of credit — government debt — are money.  If a government issues enough debt to enable all transactions, it soon loses all value.  Neither gold as gold nor government debt as government debt produce anything, and cease to have value as money if there is too much of it.  Unlike government debt, however, gold has many productive uses, and many more could be found if it were less expensive.  The only use for non-monetary government debt — an oxymoron — is wastepaper.)
2) Gold is the only legal tender currency.  People may freely choose to carry out transactions without gold, but either party to an exchange has the right to demand payment in gold.  Again, there is not enough gold in the world for this.
3) Gold is the standard of value and all legal tender currency is either gold, or is convertible into gold on demand.  This is the system that operated briefly (relatively speaking) at an international level from Great Britain’s “New Coinage” of 1816 until the general abandonment of the gold standard from 1931 to 1933.  It surprises many people to learn that, prior to the New Coinage and the imposition of the gold standard on most of the British Empire (a notable exception was India, which caused serious problems down the road), the world was on the silver standard.  Some countries tried to maintain parity of gold and silver, which caused automatic scarcity of one or the other when the relative prices changed, while many simply let the value of their gold coins “float” relative to the official silver, despite any “official” exchange rate.
4) Gold is the standard of value, and the currency unit is measured in terms of gold, but not necessarily convertible into gold.  This is actually a subset, so to speak, of 3 above.  If the government legal tender paper currency began to inflate in terms of gold, people would rush to the banks and convert their paper into gold, an example of “Gresham’s Law”: “Bad money drives out good money.”  People would hoard the gold, and use paper for their transactions.  Unless the government wanted the banks to run out of gold, they would allow (or sometimes order) the banks to suspend convertibility.  This happened in the early months of the Civil War, when the first United States Notes (Greenbacks) backed by government debt were at first convertible into gold.  Within two months, gold reserves had dropped to the point that it was calculated that within a few weeks they would be completely depleted, so the convertibility feature was dropped until 1878.  Savvy speculators held on to their gold until the end of the war, whereupon they used the gold to purchase inflated Greenbacks at bargain prices, knowing that it was a priority of the government to restore the faith and credit of the federal government by reestablishing parity of the gold and paper dollar.  Parity was reestablished in 1878, giving the speculators who had first held gold, then paper, profits in some cases of upwards of 500%.
The fact is that throughout history there has never been a time when gold served as the only money, or backed the currency, except for gold certificates.  Until the twentieth century when governments were able to seize control of money creation and economic activity in varying degrees, most transactions were not carried out using currency of any kind.  Even today in most places — as has been the case for thousands of years — transactions are carried out by credit instruments, “money contracts.”
Even that is a little misleading, because “money contract” is, in a very real sense, redundant.  Money is anything that can be accepted in settlement of a debt.  That being the case, all money is a contract and (in a sense) all contracts are money.  People carried out commerce for thousands of years before coins were even invented.  There has never been a “moneyless economy” in the entire history of the world.  Gold and silver, even currency itself, has always been of secondary importance in any economy.  It’s agreements between people and institutions that are the financial workhorses of an economy, not currency.
So, when you say you want a return to the gold standard, to which gold standard do you refer?
#30#
Posted by Michael D. Greaney at 6:00 AM