Up to a point, Doctor Schacht’s career duplicated that of any typical German of his era.  During Hitler’s rise to power, he was an enthusiastic supporter of the future Chancellor, using his prestige in the business and financial community to solicit signatures for a petition to have Hitler appointed Chancellor, going to the length of urging the current Chancellor, Franz von Papen, to resign in Hitler’s favor.
Doctor Schacht initiated and carried out the financing of the Nazi 1933 pre-election campaign.  He approved in principle of the persecution of Jews, and signed various decrees allowing the confiscation of their property.  He later publicly stated that he did not consider his disagreements with the Nazis over the treatment of Jews at that time serious enough to warrant a complete break in his relations with the Party.

At the same time, he was privately having serious qualms about what was happening.  Dr. Schacht, like so many modern politicians, considered such questions primarily a matter of personal conscience — meaning he thought it would harm him personally and professionally if he said the wrong things at the wrong time to the wrong people.
Up to a point, Doctor Schacht was an avid supporter of German rearmament, using his position as head of the central bank to arrange financing.  Although not a Keynesian, he was a pioneer in figuring out new ways to use the money-creation powers of a central bank to finance government spending.  He invented the “Mefo Bills,” short-term paper backed only by the government’s promise to pay, although  he insisted that the loans must be repaid, where Keynes simply assumed a large, non-repayable government debt is a positive good.  The Mefo Bills permitted the German government to go directly to the money market to finance rearmament.  This is now standard practice by most central banks, including the United States Federal Reserve System, but was used by the Soviets during the Nürnburg War Crimes Trials as evidence that Dr. Schacht was an enemy of humanity.
As early as April 1936, however, Doctor Schacht’s star began to wane, and he apparently let his growing disillusionment with the Nazi Party and program become too evident.  He opposed in the strongest possible terms, on the ostensible grounds that it was inflationary, an expansion in the program to develop ersatz war material.  In October, over Doctor Schacht’s protests, Herman Göring was put in charge of an accelerated armament program.  Doctor Schacht maintained that Hitler’s new, drastic armament policy was far more than was necessary for Germany to regain its position as a respected world power and maintain a favorable bargaining position with other nations.  It would involve the country in serious financial difficulties, including inflation, always an item of prime concern to Doctor Schacht.
These and other activities (such as expressing disapproval, in writing, of Gestapo methods) were enough to remove Doctor Schacht from any close connection with the Nazi “inner circle.”  He was definitely on the outs with Hitler, although Der Führer needed the support, or at least the apparent acquiescence, of “the Old Wizard.”  Possibly in a move to secure a better relationship with the man credited with saving Germany financially a little over ten years before, Hitler arranged that Doctor Schacht personally be awarded a golden Swastika, although he never joined the Nazi Party.  The official reason for his refusal to join was that “he was able to be of greater help to the Party than if he were actually a member”!, a weak excuse, but probably the only safe one to have made.
Because of his growing opposition to rearmament and expansion of war material production facilities, as well as a bitter argument with Hitler during which Doctor Schacht was accused of “obstructionism” for his conservative financial methods, he was placed on “leave of absence” from the Ministry of Economics in September, 1937.  Two months later he resigned as Minister of Economics and Plenipotentiary General for War Economy.

As head of the central bank, Doctor Schacht still continued to operate as the financial agent for the German government, but in less than six months had discontinued the issuance of unbacked short-term paper (the “Mefo Bills”) to finance rearmament.  At the end of 1938, Doctor Schacht denied an urgent request for special credit to pay government salaries.  On January 2, 1939, he held a conference with Hitler to persuade Der Führer to allow the Jews to leave Germany and try and persuade him to reduce armament expenditures, following up a week later with an official Reichsbank report, signed by all the bank directors.  A week after that Hitler removed him as President of the Reichsbank.  American newspapers assumed that Hitler was planning on starting a war, possibly against the Soviet Union (it was Poland), and wanted Schacht out of the way:

"This development may be of the utmost importance.  It is right in line with Herr Hitler's way of clearing the deck for action.  Before his coups in the Rhineland, in Austria and in Czechoslovakia he purged his General Staff of the conservative  officers who objected to such dangerous tactics and put in others more amenable to his orders.  The substitution of Herr Funk [Reichs Economics Minister Walthur Funk] for the daring but more orthodox Dr. Schacht may be the forerunner of new economic and financial adventures to come.  Dr. Schacht is not a Nazi.  Herr Funk is a hundred percenter.  Dr. Schacht has pulled many a financial rabbit out of the Nazi hat [the Mefo Bills] but nobody has ever yet accused him of fooling himself.  He knew all the time, and was very careful so to warn the Fuehrer, that it was sheer legerdemain and that no government could pay its way forever with such rabbits.  Herr Funk may be a believer in bunnies. . . . Judging by the signs, the months ahead are likely to be exceedingly hectic ones for Germany and for Europe.  There is talk of war this spring or summer.  Herr Hitler is said to be preparing for a push to the East, into the Ukraine, perhaps against the Soviet Union.  That at least would explain the firing of the unimaginative Dr. Schacht and the hiring of Herr Funk, believer in whatever financial and economic miracles Herr Hitler may want performed."  ("The Schacht Ouster," The Pittsburgh Press, January 22, 1939.)

German officials, of course, repeated several times that Schacht's advocacy in favor of the Jews being allowed to emigrate had absolutely nothing to do with his removal.  The fact that the proposal was Schacht's own initiative and endorsed by representatives of thirty-two nations, they insisted, was irrelevant; it was purely a coincidence.  The general consensus at the time, however, was that die Fraulein was protesting a little too much.  ("Nazis Discontinue Emigration Talks; Dr. Schacht Ousted," The Free Lance-Star, January 20, 1939, pp. 1, 2.)

After the dismissal of Werner von Fritsch and Werner von Blomberg, Doctor Schacht participated in plans to get rid of Hitler, first by arranging to have him deposed, and later by assassination.  In January 1943, Hitler removed Schacht as Reichminister without Portfolio because of his “whole attitude during the present fateful fight of the German Nation.”  On July 23, 1944, inspired by both his implication in the bomb plot and Hitler’s personal animosity, Doctor Schacht was arrested by the Gestapo, and confined to a concentration camp for the rest of the war.  He could not safely be “liquidated” because of his still-immense popularity and prestige with the German public. 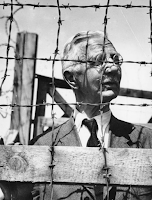 After being a prisoner of the Third Reich for two years, he was taken into custody by the Allied War Crimes Commission.  At the Nürnburg Trials, he was sentenced to eight years in prison for being Hitler’s Minister of Finance.  He served two years of his sentence, being transferred thirty-two times during that period, before his conviction was overturned in 1948.[1]  He was released on September 2, 1948.  In 1950, he was tried again and cleared of being a “second or third class Nazi,” although he had never been a member of the party.  Doctor Schacht later wrote in his memoirs, “I was imprisoned for hating Hitler.  After Hitler was dead, I was imprisoned for helping him.”  He died in Munich on June 4, 1970.
Second only to his outstanding success at stabilizing the currency in 1923 and 1924, Doctor Schacht’s greatest achievement was the reorganization of the Reichsbank (now the Bundesbank) on sounder principles of central banking, at least as much as any central bank adheres to them.
#30#
[1]The Encyclopedia Britannica states — erroneously — that Dr. Schacht was acquitted in 1946, apparently not aware that his “acquittal” was retroactive from 1948.
Posted by Michael D. Greaney at 6:00 AM