Another Taxing Question, II: The Most Just Way to Tax

Yesterday we looked at the income tax as a tax.  Is it unconstitutional?  Is it just?  We decided that if you can believe the United States Supreme Court, the income tax was constitutional prior to the Sixteenth Amendment . . . but only if it was levied unjustly.  If it were administered justly, then it would be unconstitutional!  The Sixteenth Amendment fixed that little problem, making an income tax levied justly constitutional.
Frankly, if you stop to think about it, an income tax is probably the most just form of taxation, aside from a use tax, given Adam Smith’s Four Maxims of Taxation from The Wealth of Nations, i.e., a tax should be 1) proportionate to benefits received, 2) predictable, 3) convenient, and 4) efficient.
And what do these mean?
1) Proportionate to Benefit.  The way Smith put it, “The subjects of every state ought to contribute towards the support of the government, as nearly as possible, in proportion to their respective abilities; that is, in proportion to the revenue which they respectively enjoy under the protection of the state.”  There you go — Smith favored an income tax as the best way of meeting the first principle of taxation: people pay in proportion to the value of the benefits they receive.
2) Predictable.  Anyone who has ever tried to figure out the Internal Revenue Code to determine just how much tax is due should love Smith’s second principle: “The tax which each individual is bound to pay ought to be certain, and not arbitrary. The time of payment, the manner of payment, the quantity to be paid, ought all to be clear and plain to the contributor, and to every other person.”
3) Convenient.  According to Smith, “every tax ought to be levied at the time, or in the manner in which it is most likely convenient for the contributor to pay it.”  In other words, don’t make paying taxes so difficult that people have to hire lawyers and accountants to calculate their tax liability.  (This isn’t exactly the same as #2, although it’s related.)
4) Efficient.  This one might need a bit of explanation, as it is the justification for not taxing people on what they need to live . . . so that you can give it back in the form of welfare and job subsidies: “Every tax ought to be so contrived as both to take out and to keep out of the pockets of the people as little as possible, over and above what it brings into the publick treasury of the state.”  Under the principle of efficiency, you tax on people’s ability to pay.  Why?  Because it is inefficient (and kind of stupid . . .) to tax people who can’t pay!  This also gives a poke in the eye to people who want to eliminate the income tax in favor of a consumption tax, and give a rebate or refund to those in the lower income brackets.  It is inefficient to spend money to collect a tax, only to spend more money giving it back.  (Plus it gives the State a lot of power through the ability to control a portion of people’s income.) 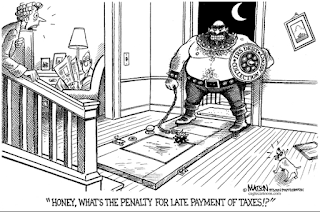 As an aside, we wonder if anyone has ever really run the numbers to show how much money would have to be collected and repaid, and what the tax rate would have to be to collect that much?  This is pretty crude, but it gives an idea of what we could expect if the income tax and all other taxes were replaced with a consumption tax for all levels of government.
First, of course, the poverty level would have to be raised to around $17,000 from $12,000 for an individual.  You have to allow for the additional money required to be paid in and refunded, which raises the prices of all goods.  To be fair, every single taxpayer must receive a refund of all consumption taxes paid on the first $17,000 of purchases.
Total government spending for the year ended June 30, 2016 was $6.7 trillion.  To that must be added the amount to be collected and refunded to calculate the consumption rate tax, or $1.8 trillion, for a total of $8.5 trillion.
Total consumer spending was $11.5 trillion, which includes borrowed money, so we’ll just assume that consumer spending would stay the same, plus the amount collected as all other taxes that is now included in consumer spending, $8.5 trillion, for a total of $20 trillion.
Dividing total government spending by total consumer income gives us a consumption tax rate of 42.5%.  Rounding that up gives us a probable increase in the consumer price level of 50%, as merchants would find it much easier to do that than 42.5%.  Thus, everything people buy that cost $1.00 before the new tax would cost $1.50 once it was instituted.
And it would be applied to ALL consumer purchases, including medicine, housing, whatever, or the tax rate would have to be even higher.
Of course, all this is pretty crude, but it gives an idea what would happen if we changed from an income tax to a consumption tax.  Looking at these figures, we do realize one thing, though.  Ultimately, all taxes are “income taxes,” as you can only pay them if you have income.