Wilson and the Fed, III: The Responses

The question in the U.S. presidential campaign of 1912 was what to do about the increasing powerlessness of ordinary people, and the concentration of power in the private and public sector élites. Five primary responses developed. There were seemingly endless variations on these responses, but we think that the following is an adequate, if broad, summary: 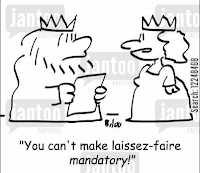 The first response (meaning the first we will look at, not the first to develop, or the first in importance) was the Republican capitalist or reactionary approach. To be as brief as possible, the capitalist position was that a well-run economy and a stable political order were best achieved by having a few private citizens own the bulk of capital. The State should leave well enough alone; the free market would function automatically to bring about just results, but only if meddling government bureaucrats would stop interfering in business and let the market do its job.
The second response was the Democratic capitalist approach. This did not differ substantially from the Republican capitalist approach. Depending on the degree of loyalty and party politics, this could mean little or much to individuals and groups involved directly in politics, but virtually nothing to public at large.
The third response was that of the Progressives, originally linked with the Republicans. It is important to note that the term “progressive” did not have the meaning we assign to it today.  Instead of being a euphemism for a radical leftist approach, the progressive position would probably be described today as “right leaning, socially conscious conservative.”
As “insurgents” against the “Old Guard” capitalist Republicans, Progressives were willing to accept increased State regulation, even some measure of government control, in order to establish and maintain a level playing field, and keep things together until equality of opportunity could be reestablished.
The fourth response was that of the Populists, linked, off and on, with the Democrats. Populism had, by this time, become imbued with socialist assumptions and ideology, largely as a result of focusing on the demand to impose desired results instead of establishing equal opportunity so people could gain desired results on their own. The degree of government control the Populists believed necessary (as opposed to regulation) was, to all intents and purposes, the only thing separating them from the socialists.
Progressivism thereby achieved a sort of “third way” between the Democratic and Old Guard Republican capitalists, and the Populists and Socialists. Accounting for the confusion in many people’s minds, even at the time, Progressivism was, in a sense, a reaction to the decay of populism as much as it was an insurgent movement against the reactionary elements of the Republican Party. 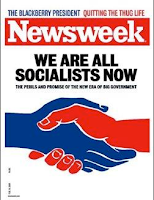 The fifth response was that of the Socialists. Socialism was split into many factions, such as the georgists, the Fabians, and the Marxists, so it’s a little misleading to lump them all together. In very broad terms, however, the program was the same for all the Socialists: the abolition of private property in capital, and government control of the economy to ensure desired results.
The fundamental error of all forms of socialism, of course, is the idea that the abstraction of the collective has rights that individual, flesh-and-blood human beings do not have.  As a result, instead of the idea behind the founding of the United States that human beings have inherent, inalienable natural rights and delegate some of them to the State, the State has inherent rights that it delegates to human beings as it sees necessary or expedient.  The socialist concept flatly contradicts the Preamble to the Constitution, in which “We, the People” delegate legal sovereignty to the federal government, but retain political sovereignty.
#30#
Posted by Michael D. Greaney at 6:00 AM