Is Money a Commodity?

Yes, we know we said we might talk about Glass-Steagall today.  The key word there was “might.”  What happens quite often, especially if blog posting is pretty far down on your list of priorities, is that sometimes you just happen to get a ripping good idea . . . or at least one easier to rip out when other work is starting to pile up. 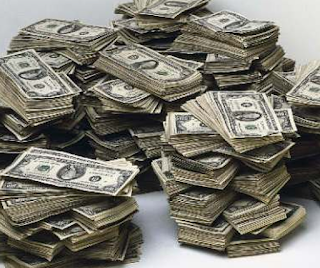 In any event, we’re still going to talk about a touchy subject today: money (what a surprise!).  All — or nearly all — of economics and finance today takes one thing for granted.  That is, money and credit is a scarce commodity in the economic sense; regardless how much money and credit existed yesterday, or will exist tomorrow, there exists a finite amount at this particular point in time.
That is (sort of) correct . . . although we’ll find out that it also is, in a sense, completely wrong.
Yes, if you pick any point in time, there is a fixed amount of every thing for the simple reason that you fixed a point in time, and everything is stopped at that moment.  That is why the economists say that in economic terms, every thing is scarce.
We separated “every” and “thing” for a reason: it means every thing.  If it’s not a “thing,” then it’s not scarce in the economic sense, is it?  And money and credit is not a thing.  It’s a way of measuring value.
Perhaps an illustration will help.  Suppose you’re barreling down the highway at 60 mph.  At precisely 10:00 am, how fast are you traveling?
An interesting point, that.  Speed — how fast you are traveling — is measured in miles per hour.  A single point in time has no duration, so there is nothing to measure.  It’s not that you’ve stopped moving.  It’s that any answer is meaningless; there is no “per” in the figure.  You have to have something to measure before you can measure it.  You can’t answer how many miles per hour or anything else when there is no time unit.
Now change the question to, how fast are you traveling from 10:00 am to 10:01 am?  In one minute you cover a mile, so you’re going a mile per minute, which is equal to 60 miles per hour.
The question gets easier with economic scarcity, because there is something to measure, i.e., how much of X is there at this point?  Rephrasing our question in terms of economic scarcity, we can ask, how many miles have we covered since 9:00 am? or, how fast have we been going if we’ve covered 60 miles from 9:00 am to 10:00 am?
At precisely 10:00 am, then, we have accumulated or consumed 60 miles worth of travel, or one hour’s worth of travel time.  If you’re getting paid by the mile, you have accumulated a service worth whatever your mileage rate multiplied by sixty equals.  If you’re getting paid by the hour, you’ve accumulated a service worth one hourly rate.  Your mileage or your time is, in a broad sense, a commodity you’re selling.  Your speed?  That’s not a commodity, it’s a measure.
Under the Banking Principle, it’s the same with money and credit.  Money and credit is not itself a commodity in fixed supply at any point in time.  It’s a measure of value, an abstraction.  It measures the value of commodities, but is not itself a commodity.  It’s like speed: it’s dollars per thing valued, miles per time unit, feet per long thing being measured.
To say, then, that the amount of money and credit in the economy is fixed, or there is too much or too little money is, from the Banking Principle perspective, meaningless.  To say there is not enough money in the economy is the same as saying you only have so many mph to go around.  Oh, no!  We’ve run out of mph, and we can’t take that drive to visit Grandma!
Sounds stupid, doesn’t it?  That’s because it is.  We’ll take a look on Monday what happens when people try to manipulate money and credit as if it is a commodity.  It’s not pretty.
#30#
Posted by Michael D. Greaney at 6:00 AM