The United States presidential campaign of 1912 was, all things considered, unique in American history.
It is common to say such things about one’s subject, of course, but in this case we believe it is warranted. It is, for example, the only campaign in which two third parties played a significant role. These were the Progressive Party, which ran Theodore Roosevelt as its candidate, and the Socialist Party, which ran Eugene Victor Debs (1855-1926). 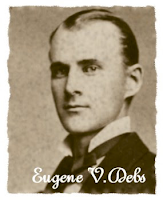 Merely to acknowledge the fact of the third parties, even their importance in the campaign, however, is to lose sight of the critical issues involved, and the underlying reasons for the prominence of the third parties in the first place.  Something was seriously wrong in America at the turn of the last century. Possibly the most serious problem, however, was that no one was really quite sure either what to do about it, or (if they knew) how to do it.
The Panic of 1893 had dealt what seemed a deathblow to the American Dream.  With the effective closing of the frontier, a farm or a small business (landed, commercial, or industrial capital) now appeared to be out of reach of most people. More and more people were forced to rely on wage system jobs to generate an adequate and secure income.
Wage system jobs are fine when there are jobs, wages are high, workers are treated well, and — well, any number of “ands.” The real problem with wage system jobs, however, is that they impose a condition of dependency, of effective slavery, on people who are nominally free adults. This is a clear offense against the dignity and sovereignty of the human person, and obviously not the ideal arrangement for a just society.
There is also the problem that the wage system is inherently contradictory. It is geared toward garnering as much as possible with the least amount of effort. “More for less” is the unquestioned principle of wage system labor relations.
Say’s Law of Markets, the principle that underpins economic activity, however, is based on the assumption that to get more, you must produce more. The ordinary way to produce more with less effort is to own the technology (the capital) that produces. “More with less” is the principle of technology.
If, however, workers own no capital and thus can only produce (generate income) with their labor, their natural efficiency (the human tendency to do more with less — what R. Buckminster Fuller called “ephemeralization”[1]), comes into direct conflict with economic reality: the fact that technology is capable of producing with little or no human labor input.
Propertylessness combined with the wage system in a technologically advanced economy thereby inserts a devastating contradiction into economic life.  Those who are productive through ownership of capital are forced to surrender what is rightfully theirs for the benefit of others who own no capital. The principle that Paul of Tarsus laid down, that those who are not productive shall not share in the benefits of production (“he who does not work, neither shall he eat”), is transformed into the socialist dogma, “from each according to his ability, to each according to his needs.”
If the Panic of 1893 had killed the dream of the average American, the Panic of 1907 did the same to the economic and political elite, or at least shook them up. The weaknesses of the financial system revealed by the degree to which wealthy and powerful individuals such as J. Pierpont Morgan (1837-1913) had been able to manipulate the system to their own benefit proved that laissez faire capitalist ideology and the unbridled “free” market (which was anything but free for the vast majority of people) was inadequate as the economic basis of a democratic society.[2] Obviously, neither private sector nor public sector control of the economy was acceptable, as long as that control was concentrated in the hands of a few.
For its own survival, then, the financial élite had to let go of some power — or, at least, seem to surrender a degree of power. As ordinary people did not have access to the means to gain property, and thus power, that meant allowing the State to have more power . . . at least until the private sector élite could control the State — precisely as Walter Bagehot (1826-1877) had recommended in his economic and political analyses half a century before. Given that, it would not make too much difference whether the capitalist private sector or the socialist public sector controlled the economy, as long as the same people controlled both the private and the public sectors.
#30#

[1] The Just Third Way integrates Fuller’s scientific concepts in design science. His political and social ideas, whatever their merit or lack thereof, are irrelevant, and in some cases contradict the principles of the Just Third Way.
[2] Vide U.S. Congress, House Committee on Banking and Currency, Report of the Committee Appointed Pursuant to House Resolutions 429 and 504 to Investigate the Concentration of Control of Money and Credit, February 28, 1913.
Posted by Michael D. Greaney at 6:00 AM